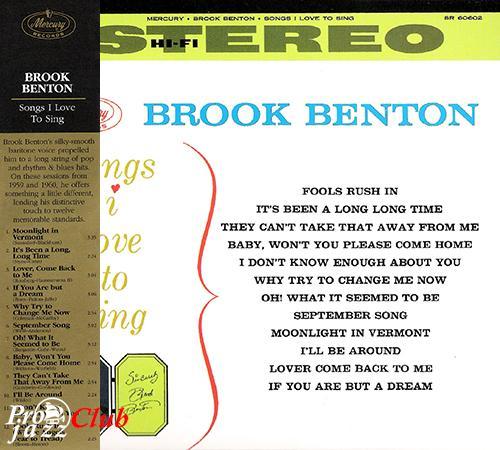 Об альбоме (сборнике)
Songs I Love To Sing is the 1960 album by singer Brook Benton. The album was one of three he released in 1960, all released on Mercury. The CD was released by the Verve Music Group on 23 September, 2003.
Songs I Love To Sing by Brook Benton is a gorgeous array of 12 standards as interpreted by Benton and his collaborator, Clyde Otis. He does not sound like the Benton of his last hit, "Rainy Night in Georgia"; rather, the singer goes to the place where Nat King Cole reigned supreme. He sounds unbelievably like Cole on some of these tunes, the phrasing and vocal texture so similar it is amazing, perfectly surrounded by superb orchestration. The Rube Bloom/Johnny Mercer classic that charted for Glenn Miller two decades before this rendition, "Fools Rush In (Where Angels Fear to Tread)," went Top 25 in 1960 from Songs I Love To Sing and is indicative of the lush sounds found on this wonderful disc. Great singers from every era always have the urge to emulate their idols; Rod Stewart sprinkled his favorite songs over various albums, culminating in his 2002 concept disc It Had to Be You…The Great American Songbook. Like Stewart, Brook Benton was a singer/songwriter, though he was in a genre where the Frank Sinatra and Johnny Mathis types let others write the tunes they would bring to life. In this setting, Benton hits a home run; these recordings are a stunning display of his vocal prowess and understanding of the material. "September Song" should have been licensed for one of the Kurt Weill tribute albums, a decidedly different version than what Lou Reed uncovered for the Lost in the Stars: The Music of Kurt Weill '80s compilation. The uncredited and worthwhile liner notes on an LP jacket which has the singer leaning on a large gold harp give some insight; Benton got the idea for this collection while convalescing in the hospital. Clyde Otis supervised the sessions and the orchestration, and it is all very beautiful, from the Gershwins' "They Can't Take That Away From Me" to Peggy Lee's "I Don't Know Enough About You." The album concludes with the hit "Fools Rush In (Where Angels Fear to Tread)," which Rick Nelson brought to the Top 15 three years after this, though there's no comparison whatsoever – Benton's rendition is classic, as is this very special record.
Лог создания рипа
Содержание индексной карты (.CUE)