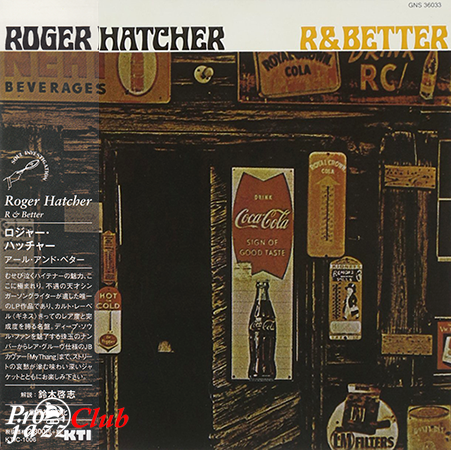 Лог создания рипа
Содержание индексной карты (.CUE)
Об исполнителе (группе)
Roger Hatcher's biggest claim to fame is being a cousin to Edwin Starr (aka Charles Hatcher). Unfortunately, Hatcher's success hasn't come close to Edwin's. A prolific songwriter, Roger has written more than 1,000 songs. His two biggest successes were an album cut by the Dramatics of his "I Dedicate My Life to You," and Clarence Carter's rendition of "I Got Caught," a deep soul classic. Clarence added a rap and scored on the R&B charts with the Hatcher song. Roger Hatcher was born in Birmingham, AL, in 1946. His two older brothers, Will and Roosevelt, inspired him musically – Will played sax and Roosevelt sang. Hatcher wrote his first song, "I Need Someone," at Hayes High in Birmingham, where he would develop tunes on the piano in the music room. Hatcher had no formal training and played by ear.
He moved to Detroit in 1964 and signed with Dotty's Records. Two singles were released: "Get a Hold of Yourself" and "Party Over Yonder." The 45s are listed as by "Little Roger Hatcher." The flop of both singles sent him traveling to Nashville, where he secured a contract with Excello Records recording "I Dedicate My Song to You," released in 1968. The flip side, "The Sweetest Girl in the World," gained some recognition in Britain, but neither it, nor the A-side, did much in the States. Disappointed, Hatcher moved on and connected with Don Davis, who had previously recorded Hatcher's "Girl Come on Home" on Major Lance for Volt Records. Davis liked Hatcher's songs and signed him to Volt. The first recording was remaking "I Dedicate My Love to You" into "I Dedicate My Life to You." Stax released it on its Volt label in 1972. Davis was working with the Dramatics at the time and had Hatcher's song killed, then had it cut by the Dramatics and placed on their Dramatically Yours LP. This didn't please Hatcher and he and Davis became bitter enemies for years.
Lightning struck twice in 1973 when Hatcher, now living in Cleveland, OH, cut "Caught Making Love" on his own Black Soul label. Hatcher shopped it to all the majors to no avail, so he pressed up some more copies and sold them himself, at which time, Mickey Eichner of Columbia Records picked it up and released it on Columbia in 1974. Hatcher's version was risqué, to say the least, particulary for the mid-'70s. Halfway through Hatcher's record was a recording of Virginia Davis having an orgasm. Many stations banned the record, killing its chance for wider exposure. Clarence Carter heard it, added a rap, took out the woman's voice, and got a release on ABC Records in 1975. The song became a deep soul hit.
Hatcher went on to many other projects. The Platters, led by Clevelander Sonny Turner, recorded his "Get a Hold of Yourself in 1986; Deluxe Records released it in England. Based in Cleveland, Hatcher recorded singles on his own Super Bad label but all failed to score. Mysteriously, an unauthorized album was released in England of Hatcher's songs that he didn't find out about until British collectors bugged him for a copy. All the tracks were by Hatcher except two. In 1987, he moved to Los Angeles, where he still lives, records, and shops his demo tapes. An authorized Roger Hatcher album was released in Japan entitled The Best of Roger Hatcher. Britain's Expansion Records released The Roger Hatcher Collection on CD. It's worth a hear-see.
~ Artist Biography by Andrew Hamilton ~