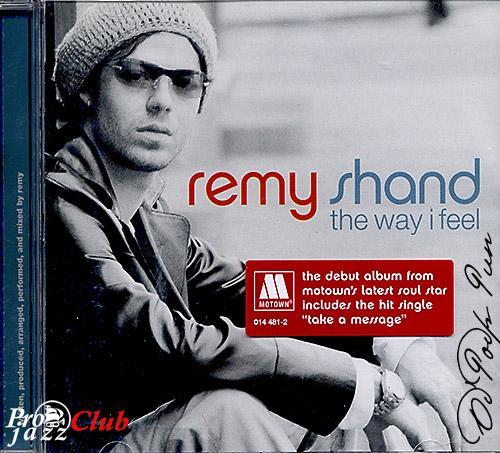 Треклист:
Remy Shand — The Way I Feel
Жанр: Motown / Blue-Eyed Soul
Носитель: CD
Страна-производитель диска (релиза): EU
Год издания: 2001
Издатель (лейбл): Motown
Номер по каталогу: 014 481-2
Страна исполнителя (группы): Canada
Аудиокодек: FLAC (*.flac)
Тип рипа: image+.cue
Битрейт аудио: lossless
Продолжительность: 47:21
Источник (релизер): Од'Родр Рип
Наличие сканов в содержимом раздачи: да
Треклист:
01. The Way I Feel 05:02
02. Burning Bridges 04:35
03. Everlasting 04:22
04. The Second One 04:11
05. The Colour of Day 03:36
06. Take A Message 04:04
07. I Met Your Mercy 02:44
08. Rocksteady 03:39
09. Liberate 03:56
10. Looking Back On Vanity 05:01
11. The Mind's Eye 06:12
Лог создания рипа
Содержание индексной карты (.CUE)
Об альбоме (сборнике)
The problem with neo-soul is that its advocates are quick to celebrate artists that capture the merest essence of the form -- elements that are clearly reminiscent of Stevie, Curtis, Sly, Marvin, even Prince -- without caring whether the songs themselves are all that memorable. Usually, what matters is the feel and the mannerisms, as evidenced by D'Angelo's praised, mannered second album. Even acclaimed artists like Alicia Keys are praised for what they could be as much as for what they are. This is the background that makes Remy Shand's debut album, The Way I Feel, such a surprise. By all accounts, Shand should not be a musician that gets it right -- he's a clean, white, middle-class twentysomething, raised on records that were made well before his birth. Sometimes, this background is evident in the production, when he and co-executive producer Steve Warden rely on sounds that evoke classic early-'70s soul, or in Shand's slightly affected falsetto, but those are exceptions to the rule on The Way I Feel, because the album's foundation is built on classic songwriting -- sturdy, tuneful songs that are deceptively simple in their structure but reveal their strength through repeated listens. They're winning upon the first listen, since they have a sweet, sultry feel delivered smoothly and assuredly, but so does most neo-soul -- it's the repeated plays that reveal that the songs themselves are the most seductive thing about the album, not the lush, post-Philly soul production, or the fact that Remy Shand played nearly every instrument on this record. Yes, he's indebted to his idols, but no more than the Strokes are to theirs -- and this is the romantic soul flip side of Is This It's invigorating slice of traditionalism, which means even if you've heard and loved music like this before, you'll soon be swayed by the sound, skill, and sheer joy of this debut, one of the very best of its kind.
AMG