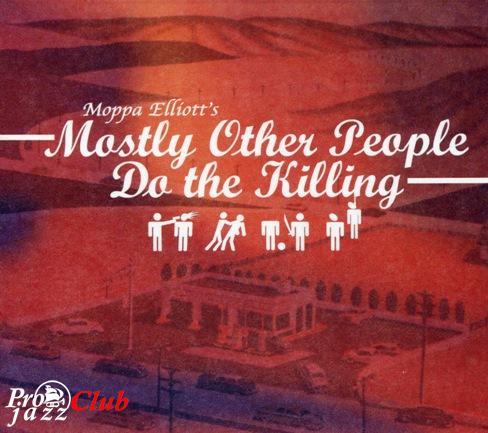 Liner Notes
What little establishment there is in jazz is creating a surreal pick-and-choose history, canonizing only a fraction of what has occurred within the jazz tradition. This conservative faction is bent upon surrounding "true jazz" with barriers to protect it from being tarnished by the impurities of the music it has grown into. (The Lincoln Center Jazz Orchestra plays the music of Cecil Taylor? I think not.) Well, I like my jazz with some dirt on it, sometimes a lot of dirt. Jazz has started to take itself too seriously and is in danger of falling into the same stagnant condition that so-called "classical music" is in now. Perhaps that's what some people want, but if we are moving towards sterile, historically accurate renditions of once vibrant pieces of music, I want nothing to do with it. Bring out the mud...the more the merrier. Duke Ellington wrote some of the greatest music in the history of human culture, and I love to play his tunes, but I writhe in agony every time I hear someone attempt to "pay homage" to the man by trying to re-record the same arrangements with solos that imitate the original. I don't need that, I own the original. Rather than just make music that fits within some artificial "tradition" or music that rejects jazz completely, I would rather make music that uses jazz' identity crisis against it, piling as many nonsensical musical associations together as possible to create music that is aware of its own inconsistencies, ironies, and contradictions and likes it that way. Standing on the shoulders of giants makes it easier to kick them in the teeth.
So, this is my band, and this is our music. All of these tunes are named after actual towns in western Pennsylvania that I've never been to. I wrote each of them while thinking about other places or people or whatever. Since program music is an elitist dream, and they'd sound exactly the same if I named them after myths, or biological processes, or my pets, I decided that these towns have names worthy of being used as song titles. A rose by any other name.. . ~ Liner Notes
AAJ Review
Moppa Elliott is a young bassist who leads a young, talented band. As such, the music—both written and improvised parts—is misleadingly mature. Whether it's strong training and influences or just plain old giftedness I can't say, but it's heartening to see such talent continue to flow into jazz, despite the great old form's ongoing brush with death at the hands of the music business, aided and abetted by an increasingly indifferent or antipathetic public.
Elliott seems to want to distance his project from the mainstream designation, but here perhaps his youth shows more plainly, as Mostly Others Do the Killing is clearly a jazz record. The title and design of the CD aims to ape an alternative rock aesthetic, but five seconds into the music, no one will be fooled. The compositions are in-the-pocket modern jazz romps. The music is playful and seemingly unintimidated by the deep waters in which it swims, but the ideas and stylistic devices employed are far from avant garde. Elliott is correct to aim for a younger audience, but his music is far more sophisticated than any alternative rock, and he has a heap more instrumental talent in his band.
Jon Irabagon's soprano playing seems to reveal an awareness of Steve Lacy, and he can play with bright clarity and microtonal murkiness at will. The fine trumpeter Peter Evans, also reported to implement piccolo trumpet and baritone horn on this outing, likewise has technique to spare, sporting by turns precision to rival Marsalis and controlled, inspired looseness that suggests an affinity with Don Cherry. The leader's bass is recorded here, alas, heavily. He and drummer Kevin Shea certainly manage to swing the band through the required passages and assume a perfectly satisfactory free pulse at the appropriate moments. ~ Ty Cumbie, AAJ
EAC Report
Exact Audio Copy V0.99 prebeta 5 from 4. May 2009
EAC extraction logfile from 16. January 2010, 17:19
Moppa Elliott / Mostly Other People Do the Killing
Used drive : hp DVD-RAM GH40L Adapter: 0 ID: 1
Read mode : Secure
Utilize accurate stream : Yes
Defeat audio cache : Yes
Make use of C2 pointers : No
Read offset correction : 667
Overread into Lead-In and Lead-Out : No
Fill up missing offset samples with silence : Yes
Delete leading and trailing silent blocks : No
Null samples used in CRC calculations : Yes
Used interface : Installed external ASPI interface
Used output format : User Defined Encoder
Selected bitrate : 1024 kBit/s
Quality : High
Add ID3 tag : No
Command line compressor : C:\Program Files\Exact Audio Copy\Flac\flac.exe
Additional command line options : -6 -V -T "ARTIST=%a" -T "TITLE=%t" -T "ALBUM=%g" -T "DATE=%y" -T "TRACKNUMBER=%n" -T "GENRE=%m" -T "COMMENT=EAC FLAC -6" %s
TOC of the extracted CD
Track | Start | Length | Start sector | End sector
---------------------------------------------------------
1 | 0:00.00 | 5:42.26 | 0 | 25675
2 | 5:42.26 | 6:33.40 | 25676 | 55190
3 | 12:15.66 | 6:17.20 | 55191 | 83485
4 | 18:33.11 | 9:05.51 | 83486 | 124411
5 | 27:38.62 | 7:17.70 | 124412 | 157256
6 | 34:56.57 | 13:02.36 | 157257 | 215942
7 | 47:59.18 | 7:12.49 | 215943 | 248391
Range status and errors
Selected range
Filename C:\Users\Igor\Music\eac\Moppa Elliott - Mostly Other People Do the Killing.wav
Peak level 100.0 %
Range quality 100.0 %
Test CRC D602BF74
Copy CRC D602BF74
Copy OK
No errors occurred
AccurateRip summary
Track 1 not present in database
Track 2 not present in database
Track 3 not present in database
Track 4 not present in database
Track 5 not present in database
Track 6 not present in database
Track 7 not present in database
None of the tracks are present in the AccurateRip database
End of status report
По всем вопросам пишите личное сообщение пользователю M0p94ok.
—
134
M0p94ok
Нет комментариев. Ваш будет первым!
Войдите или зарегистрируйтесь чтобы добавлять комментарии