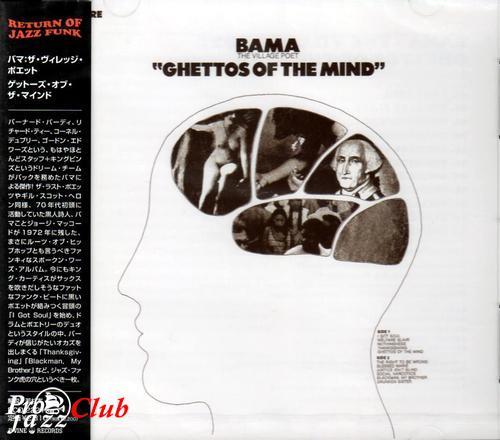 Треклист:
Bama (The Village Poet) - Ghettos of the Mind
Жанр: Jazz-Funk, Poetry, Spoken Word
Носитель: CD
Страна-производитель диска (релиза): Япония
Год издания: 1972 (2005)
Издатель (лейбл): P-Vine Records
Номер по каталогу: PCD-22215
Страна исполнителя (группы): США
Аудиокодек: FLAC (*.flac)
Тип рипа: tracks+.cue
Битрейт аудио: lossless
Продолжительность: 42:14
Источник (релизер): wikieup (what)
Наличие сканов в содержимом раздачи: нет
Треклист:
01. I Got Soul (4:48)
02. Welfare Slave (5:50)
03. Nothingness (2:28)
04. Thanksgiving (3:58)
05. Ghettos of the Mind (0:35)
06. The Right to Be Wrong (4:18)
07. Blessed Marie (3:57)
08. Justice Isn't Blind (2:37)
09. Social Narcotics (5:11)
10. Blackman, My Brother (5:41)
11. Drunken Sister (2:51)
Состав:
George McCord aka "Bama" - poetry reading
with
Bernard Purdie - drums
Richard Tee - keyboards
Gordon Edwards - bass
Cornell Dupree - guitar
All spoken material written by "Bama".
Music arranged by Jimmy "Wiz" Wizner and Billy Jackson.
Лог создания рипа
Содержание индексной карты (.CUE)
Отчет CUETools
Review by Flabber
Okay. Let me start off by quoting the blurb from my favorite record shop in the universe, "A lost classic in the funky poetry mode of the 70s – and right up there with the best work from the time by the Last Poets, Jim Ingram, or Gil Scott Heron! Bama's got a rough-edged voice that works very well with the funkier backings of the set – handled by a team that includes Bernard Purdie on drums, Richard Tee on keyboards, and Cornell Dupree on guitar – and this rough vocal style also fits the themes of the tunes, which are still as political and righteous as other work in the genre, but a bit more down to earth as well. .."
Now, I realize that Dusty Groove exists to sell records, aside from their pedagogical function of turning the people of the world onto righteous music. And they sometimes are guilty of a wee bit of over-hyping the rarities in their own stock in order to generate enthusiasm. Enthusiasm is a good thing. I rarely post about an album I am not enthusiastic about.
But let's get something straight right here and now. Bama (George McCord) was no Gil Scott Heron or Leroi Jones (Amiri Baraka), and can't hold a candle to the flames of The Last Poets or the likes of Jayne Cortez. In my opinion, if it wasn`t for the players on this album like Bernard `Pretty Purdie` and Cornell Dupree, nobody would care at all about it at this point.
McCord has his moments, but its mostly the musical arrangements that keep you listening. The opening track "I Got Soul," has integrity, dealing as it does with how suffering - even suffering the horrors of state-sponsored racial discrimination - can make an individual who he is, leaving him to say that if he had his life to live all over again he would still "do it black." It's a cool poem with great instrumental backing, that shows Bama in a light of a no-frills, sincere, and rough-around-the-edges street poet. So far so good. "Welfare Slaves" is another decent tune, a cynical slow rap over a suitably slow blues, and observations that should be required listening for those lost souls of the American Right-Wing who still go around thinking and saying that people actually *want* to be on welfare. So far so good. The next track, "Nothingness" is when things start to get a little shakey. Two and a half minutes of Bama philosophizing about nothingness over a spacey electric piano chord sequence, wherein he concludes "that after many years of nothingness, I have found nothingness to be something. But compared to something, it was still nothing. Nothing." Deep, man. Deep.
Alright so one clunker doesn't make me give up on a record. However, the next one was almost the final nail in the coffin-lid of my first experience with Bama. The next track, "Thanksgiving" is just Pretty Purdie giving a tom-tom-heavy drum solo while Bama recites his poem. Wherein Bama makes profound observations like, "Them pilgrims was a bunch of phonies." He then goes on to give his counter-narrative to the white American vision of Thanksigiving, while simultaneously getting in some paternalistic condescending remarks about "the Indians were too slow to learn," and some bitter critiques about the invasion of North America being an `indepedence` for some. Once again, Bama is sincere and means every word of it. But it's just hard for me not to bust out laughing when he lets loose with poetic stanzas like:
"You give thanks for destroying an innocent people who weclomed you in when your own deprived you of a right to pray.
You give thanks for taking the land of a people who gave you a place to stay.
God have Mercy.
Eat your turkey."
All of this delivered in his gravel-gargling voice that is very reminiscent of Red Foxx. Immediately on first hearing this track, the following image was born inside my mind`s eye:

Side two of the album. Surprisingly, given everything I`ve written above, is that one of the best things on the record is the relatively unaccompanied "The Right to be Wrong" (which has only a heart-beat thumb of a drum machine accompanying it). A reflection on non-judging of our fellow humans that would be worthy of a Buddhist monk if it wasn't for some latent homophobia (..."this would even give the homo a right to be wrong"). Next track - Blessed Marie, rather unremarkable and trite paen to falling in love with (and having married) a prostitute. Followed by "Justice Isn't Blind," which is by far the grooviest track here, both musicially and lyrically sharp, with the band laying down a latin-fringed funk of low-key atmosphere. But then when in the final eight-bars or so the band just works the groove with no restraint, I start wishing this was just an all-instrumental LP.. "Social Narcotics"... I can`t really comment on critiques so sophmoric as those on this track. It`s just kind of embarassing to listen to. "Blackman, My Brother," is intense, however. Backed again only by Bernard Purdie, its a relentless rejection of white culture and its white-washing of American history, of its underbelly of violence, rape, and subjegation, and also shatteres any rose-colored glasses looking at a utopic, romantic vision of the Civil Rights movement, and an angry recuperation of self-respect and pride in blackenss. It's delivered with the same directness and sincerity as the rest of the stuff on this album, but its got a sophistication that is lacking in a lot of the other poems.
The final track, `The Drunken Sister`... just kind of fizzles out compared to the previous track. Not much to say here, really. Nothing bad, but nothing too great.
So if you haven`t deduced it already I am ambivalent or perhaps just indifferent to this record. It has historical value but more for the people who played on it than for the poetry contained in it, although it might reflect a bit more realistically the spectrum of black urban poetry in the early seventies (I mean, it couldn`t ALL be brilliant, right?). But the next time I decide to reorganize my LP collection, I am going to have a tough time deciding whether this album belongs in the section with Gil Scott-Heron and The Last Poets, or is maybe better suited to the section with Richord Pryor and Red Foxx...
Чтение стихов под джазовый аккомпанемент.