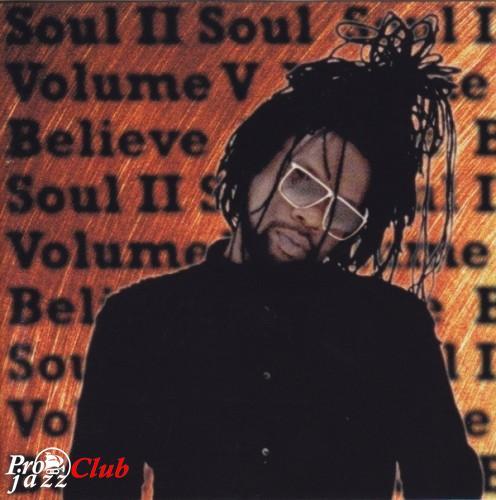 Треклист:
Soul II Soul / Volume V Believe
Жанр: Funk/Soul,R&B,Hip Hop
Носитель: CD
Страна-производитель диска (релиза): Holland
Год издания: 1995
Издатель (лейбл): Ten Records/Virgin
Номер по каталогу: CDV 2739,7243 8 40628 2 8
Страна исполнителя (группы): UK
Аудиокодек: FLAC (*.flac)
Тип рипа: image+.cue
Битрейт аудио: lossless
Продолжительность: 00:59:03
Источник (релизер): собственный рип
Наличие сканов в содержимом раздачи: нет
Треклист:
1 Love Enuff (feat. Penny Ford)
2 Ride On (feat. Caron Wheeler)
3 How Long
4 Feeling (feat. Caron Wheeler)
5 Universal Man (feat. Jazzie B.,Eyvet)
6 Be A Man (feat. Melissa Bell)
7 Zion
8 Don't You Dream (feat. Charlotte)
9 Game Dunn
10 Sunday (feat. Caron Wheeler)
11 Pride (feat. Charlotte,Sensi)
12 I Care (Soul II Soul)(feat. Charlotte)
13.1 B Groove
13.2 Believe
Лог создания рипа
Об исполнителе (группе)
Soul II Soul are an English musical group formed in London in 1988. They are best known for their 1989 UK chart-topper and US Top 5 hit, "Back to Life (However Do You Want Me)". They have been nominated for five Brit Awards – twice for Best British Group.The group initially attracted attention as a sound system, playing records at house and street parties (where their clothing style, dubbed "Funki Dred", started a line of clothing). Founded by Jazzie B and featuring a changing roster of other musicians – notably Nellee Hooper, Simon Law, Phillip 'Daddae' Harvey and Caron Wheeler – Soul II Soul's experiments in music-making of their own resulted in the dub plate "Fairplay," which secured them a recording contract with Virgin Records.
Their first singles in 1988 failed to make the UK Top 40, but the group went on to commercial success in 1989 with the singles "Keep on Movin'" and "Back to Life (However Do You Want Me)", which topped the UK Singles Chart for four weeks, and was the fifth best-selling single in the UK that year. Both tracks, which featured Wheeler on vocals, were taken from their debut album Club Classics Vol. One which reached number 1 in the UK Albums Chart and was certified triple platinum by the British Phonographic Industry. In July 1989, the British music magazine, NME, reported that Soul II Soul had to pull out of their scheduled live appearance on BBC Television's Top of the Pops programme, following a dispute with the programme's producer.
The group also had some success in the United States, where "Back To Life" reached the Top 10 and was certified platinum, and the album (renamed as Keep on Moving for the US market) reached the Top 20 and sold over two million copies. The group also won two Grammy Awards; Best R&B Performance by a Duo Or Group With Vocals for "Back To Life", and Best R&B Instrumental for "African Dance".
Their follow-up album, Vol. II: 1990 – A New Decade, yielded two Top 10 hits, "Get a Life" and "A Dream's a Dream", the latter featuring vocals by Victoria Wilson James. This album also reached number 1, and was certified platinum by the BPI, and reached the Top 30 in the US where it was certified gold. In April 1990, Soul II Soul got three US Soul Train awards. The band had one more Top 10 in 1992 with "Joy", taken from their third album Vol. III: Just Right, which itself peaked at number 3 and was certified gold by the BPI. However, by this time the band's commercial success was in decline.
Their greatest hits album, Volume IV: The Singles 88–93, was released in late 1993 and peaked at number 10. Soul II Soul reached Volume V of their series of albums for Virgin in 1995, which peaked at number 13. They then moved to Island Records and released two more albums in 1997, Volume VI Time for Change and the remix album @REMIX.or.jp, but these failed to chart. The group then virtually disbanded for some years, but reformed for various live dates in the 2000s.
In 2002, Doreen Waddell, a former singer with Soul II Soul living in Hove, died after being hit by three cars while fleeing from a shoplifting incident. The 36-year-old, who left a 4-year-old son, sang lead vocals on Feel Free and Happiness (Dub), and backing vocals on other tracks, on the album Club Classics Vol. One.
The daughter of former member Melissa Bell, Alexandra Burke, was the winner of the 2008 series of the UK television talent contest The X Factor and has since gone on to a successful music career of her own. On 2 December 2008, a radio programme about Soul II Soul was broadcast on BBC Radio 4.
The Soul II Soul Sound System featuring Caron Wheeler toured Australia nationally in February 2009. They played the Playground Weekender Festival near Sydney. Soul II Soul performed live at the Yasalam free concerts in conjunction with the 2009 Formula 1TM Etihad Airways Abu Dhabi Grand Prix celebrations in October 2009.
Об альбоме (сборнике)
Six years after they revolutionized R&B and soul with their debut album, Keep on Movin', Soul II Soul returned with Vol. V: Believe. Since their debut, the soul collective had been struggling to regain their position as musical innovators; in the process, they turned out two confused albums that had their moments, but nothing quite as stirring as their initial singles, which were collected on the British-only Volume IV: The Classic Singles. Believe, their fourth album of original material, doesn't necessarily make a case for Soul II Soul as pioneers in the mid-'90s, but it does represent something of a comeback. Where their two previous albums were muddled affairs, Believe is clear and confident, filled with fully formed songs. It helps that Jazzie B, the leader of the group, has persuaded former members Caron Wheeler and Penny Ford to make appearances on the album, and has recruited some genuine new talent that helps spark him into recording his best music since the group's debut. Granted, it doesn't push down many boundaries, but Believe fits comfortably into the laid-back, jazz-saturated grooves of '90s R&B.