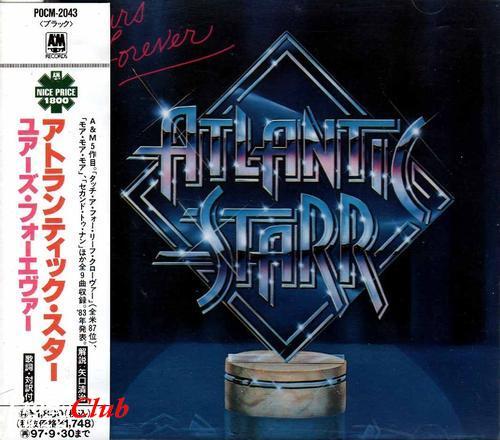 Треклист:
Atlantic Starr - Yours Forever
Жанр: Funk, Soul, Disco
Носитель: CD
Страна-производитель диска (релиза): Япония
Год издания: 1983 (1995)
Издатель (лейбл): A&M Records
Номер по каталогу: POCM-2043
Страна исполнителя (группы): США
Аудиокодек: FLAC (*.flac)
Тип рипа: tracks+.cue
Битрейт аудио: lossless
Продолжительность: 40:39
Источник (релизер): What.CD
Наличие сканов в содержимом раздачи: нет
Треклист:
01. Yours Forever (4:55)
02. Touch a Four Leaf Clover (4:44)
03. More, More, More (4:44)
04. I Want Your Love (5:00)
05. Second to None (4:39)
06. Island Dream (4:53)
07. Who Could Love You Better? (4:32)
08. More Time for Me (3:44)
09. Tryin' (3:28)
Лог создания рипа
Содержание индексной карты (.CUE)
Отчет CUETools
AllMusic Review by Alex Henderson
Atlantic Starr's fifth album, Yours Forever, was lead singer Sharon Bryant's last album with the East Coast soulsters; it was also the last of three albums that James Carmichael produced for them. While 1981's Radiant and 1982's Brilliance -- the two previous Atlantic Starr LPs that Carmichael had produced -- were superb, this 1983 release is uneven. That isn't to say that Yours Forever is a bad album; none of the material is terrible. But this time, there aren't as many five-star gems. The songs that deserve to be exalted as gems range from the haunting smash "Touch a Four Leaf Clover" and the rock-tinged "Tryin" (both of which feature Bryant) to the dreamy title song (which finds David Lewis providing a memorable lead vocal). Unfortunately, Yours Forever also has its share of songs that are merely competent. Take "I Want Your Love," for example. This Chic-like sophisti-funk/dance number (which shouldn't be confused with the 1978 Chic hit that is also titled "I Want Your Love") is pleasant enough, but it isn't in a class with "Circles," "When Love Calls," "Love Me Down," and other treasures that Carmichael had produced for Atlantic Starr in 1981 or 1982. For Atlantic Starr fans, hearing Yours Forever in 1983 was like receiving beer when you had grown accustomed to champagne -- if Radiant and Brilliance were R&B feasts, Yours Forever is merely a snack. It isn't a disaster, but it doesn't live up to the consistently high standards that had characterized Atlantic Starr's previous work with Carmichael. Of the three albums that Carmichael produced for Atlantic Starr in the early '80s, Yours Forever is the least essential and the most inconsistent.