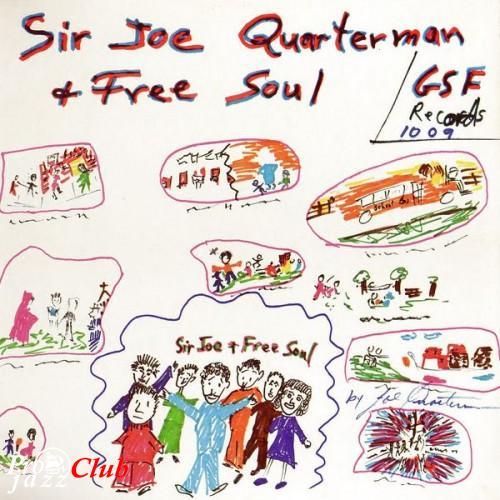 Треклист:
Sir Joe Quarterman & Free Soul / Sir Joe Quarterman & Free Soul
Жанр: Funk, Soul
Носитель: CD
Страна-производитель диска (релиза): England
Год издания: 2007 (1973)
Издатель (лейбл): Soul Brother Records
Страна исполнителя (группы): United States
Аудиокодек: FLAC (*.flac)
Тип рипа: tracks+.cue
Битрейт аудио: lossless
Продолжительность: 1:10:30
Источник (релизер): WEB
Наличие сканов в содержимом раздачи: да
Треклист:
1. (I Got) So Much Trouble In My Mind
2. I Made A Promise
3. The Trouble With Trouble
4. The Way They Do My Life
5. Find Yourself
6. Gonna Get Me A Friend
7. Give Me Back My Freedom
8. I Feel Like This
9. Live Now Brothers
10. Thanks Dad (Part 1 & 2)
11. I'm Gonna Get You
12. This Girl Of Mine (She's Good To Me)
13. No
14. Get Down Baby (Part 1 & 2)
15. I'm A Young Man
16. How High
17. Let Me Be What I Am
18. You Know It's True
Лог создания рипа
Содержание индексной карты (.CUE)
Лог проверки качества
Об исполнителе (группе)
Biography
Joe Quarterman was an unfairly overlooked funk and soul singer influenced by -- but not imitative of -- James Brown.
Honing his chops in church choirs and various vocal groups, Quarterman earned the nickname "Sir" in high school while singing with a group called the Knights;
he subsequently joined up with a female backing quartet as Sir Joe & the Maidens and cut a few records during the early '60s.
Quarterman went on to play trumpet in the El Corols (aka the Magnificent Seven), whose highest-profile gig came as Garnet Mimms' backing band. In 1970, after
playing jazz with the Orlando Smith Quintet, he formed a backing group called Free Soul, which featured lead guitarist George "Jackie" Lee, jazz-trained guitarist
Willie Parker, fretless bassist Gregory Hammonds, keyboardist Karissa Freeman, drummer Charles Steptoe, and horn player Leon Rogers.
Their first single, "(I Got) So Much Trouble in My Mind," was also their biggest, reaching the R&B Top 30 in early 1973.
Quarterman's only LP, Sir Joe Quarterman & Free Soul, was released later that year on the small GSF label, and showed Quarterman to be an avatar of the kind
of hard, socially conscious funk James Brown often recorded during the early '70s.
Further singles followed, including "This Girl of Mine (She's Good to Me)," "I'm Gonna Get You," and "Thanks Dad," before Quarterman moved to Mercury in 1974.
Unfortunately, the label issued only two singles, the fine "Get Down Baby" and "I'm a Young Man," before letting Quarterman go.
Financial problems broke up the band, and Quarterman quit the business to return to college and earn his degree in architecture.
Collectables reissued Quarterman's lone album on CD during the '90s, adding several non-LP singles as bonus tracks.
(by Steve Huey All Music Guide)
Об альбоме (сборнике)
Re-mastered and extended version of this great Classic Funk album from 1973. ‘I’ve Got So Much Trouble In My Mind’ is of course a well known classic but of an equal standard from the original album are ‘Trouble With Trouble’, ‘The Way They Do My Life’, ‘Find Yourself’ and ‘I Made A Promise’. Added here are the non album singles ‘Thanks Dad’ , ‘This Girl Of mine’ , ‘Get Down Baby’ , ‘Im A Young Man’ and the brilliant and often sampled ‘Im Gonna Get You’ plus 3 tracks that were unreleased at the time the best of which is ‘How High’. A Great album which now sounds incredibly fresh and punchy.
Состав
Joe Quarterman (trumpet, vocals),
George R. Lee (guitar),
Gregory C. Hammonds (bass),
Allen Stewart (drums),
Willie Parker, Jr. (guitar),
Karissa Freeman (keyboards),
Leon Rogers (saxophone)