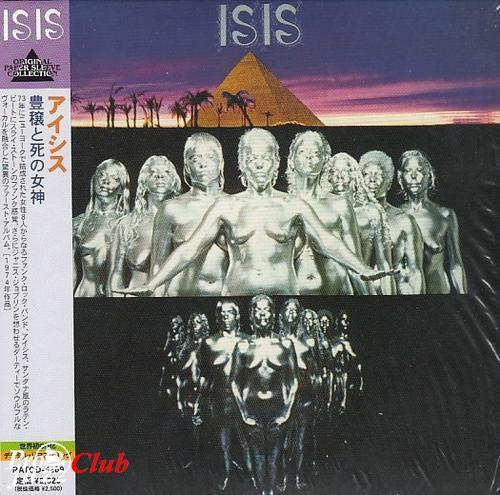 Треклист:
Isis - Isis
Жанр: Funk, Soul
Носитель: CD
Страна-производитель диска (релиза): Япония
Год издания: 1974 (2007)
Издатель (лейбл): Vivid Sound Corporation/Muskrat Records
Номер по каталогу: RATCD-4269
Страна исполнителя (группы): США
Аудиокодек: FLAC (*.flac)
Тип рипа: tracks+.cue
Битрейт аудио: lossless
Продолжительность: 44:10
Источник (релизер): khalmandcollected (what)
Наличие сканов в содержимом раздачи: нет
Треклист:
01. Waiting for the Sonrise (4:57)
02. Everybody Needs a Forever (4:44)
03. Servant Saviour (7:47)
04. Rubber Boy (6:22)
05. April Fool (5:26)
06. Bitter Sweet (4:08)
07. Do the Football (2:55)
08. She Loves Me (4:45)
09. Cocaine Elaine (3:06)
Лог создания рипа
Содержание индексной карты (.CUE)
Отчет CUETools
Review by Joe Viglione
Isis is the Egyptian goddess of fertility, represented as wearing a cow's horns and solar disk on her head, according to the World Book Dictionary, and the name was perhaps most appropriate for this '70s band, though a Latin group, a rapper, and a metal band all have released records under the same name. Those artists have nothing to do with this interesting and highly experimental project. With production by Shadow Morton the same year he produced the New York Dolls' second LP, In Too Much Too Soon, two former members of Goldie & the Gingerbreads debut on Buddah with a self-titled eclectic jazz/rock amalgam. As Gingerbreads' lead singer Goldie Zelkowitz re-emerged as Genya Ravan, both Carol MacDonald and drummer Ginger Bianco redefined their musical vision, developing this somewhat original concept with horns, congas, bongos, and heavy emphasis on the all-girl band which Goldie & the Gingerbreads pioneered. Sporting an album cover rife with Egyptian imagery much like Yoko Ono's album from the year before, the 1973 epic Feeling the Space, Isis take it a step further, the cover photo sporting the eight women encased in silver via Jon Stevens' "metal images" which are "precise reproductions of the human form." Reproductions or no, the band is still totally naked on the front cover under palm trees, a pyramid, and a purple sky. It was striking for the time and hinted at glam rock. Although there is barely any of that element here, perhaps some of the guitar psychedelia on "Servant Saviour" would suffice as that, resplendent in mellow versions of Black Sabbath riffs, but the style vocally and musically is very much like a less-focused Ten Wheel Drive. MacDonald emulates Genya Ravan singing, and much of the music parallels the Ten Wheel Drive sound. There are 16 naked photos of the chrome silver gals on the back cover flanked by color photos of the Sphynx. No wonder the rumor mill had David Bowie singing their praises, just as the Rolling Stones were enamored of Goldie & the Gingerbreads. "She Loves Me" can't be any more specific; it's a bluesy ballad and one of the album's best moments. As blatant as the title is, the song comes across more subtle. Seven of the nine tunes were written by the former Gingerbreads Carol MacDonald and Ginger Bianco, and they shift gears perhaps too much for the album's own good. How prophetic. The bisexual female character on Star Trek Voyager two-and-a-half decades later would be called "7 of 9" -- and as Bowie had much success with the gay theme, it should have been more of a factor. "Cocaine Elaine" has a bluesy New Orleans feel with wonderful backing vocals, but the musical genres jump so much it feels like a movie soundtrack. 1975's follow-up album was produced by Allen Toussaint and featured June Millington from another significant pioneering all-girl group, Fanny, but sadly, this Isis only put out two albums.