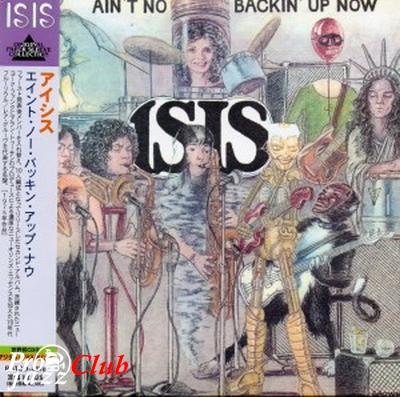 Треклист:
Isis - Ain't No Backin' Up Now
Жанр: Funk, Soul
Носитель: CD
Страна-производитель диска (релиза): Япония
Год издания: 1975 (2007)
Издатель (лейбл): Vivid Sound Corporation/Muskrat Records
Номер по каталогу: RATCD-4270
Страна исполнителя (группы): США
Аудиокодек: FLAC (*.flac)
Тип рипа: tracks+.cue
Битрейт аудио: lossless
Продолжительность: 33:43
Источник (релизер): khalmandcollected (what)
Наличие сканов в содержимом раздачи: нет
Треклист:
01. Ain't No Backin' Up Now (3:38)
02. Icy Winds (3:12)
03. Old Stories (4:28)
04. Gold (3:17)
05. Eat the Root (3:52)
06. Bobbie & Maria (4:41)
07. Lost Romeo (3:52)
08. Come One, Come All (3:59)
09. Sunshine Tree (2:44)
Лог создания рипа
Содержание индексной карты (.CUE)
Отчет CUETools
Review by Alex Henderson
The 1970s were full of large soul-funk bands that had nine or ten members (in some cases, even more), and the majority of them were male dominated if not entirely male. An obscure 1970s band that should not be confused with the 1990s rapper Isis, this Isis was a rarity in that all ten of its members were women. The interracial unit didn't get very far commercially, a fact that some attributed to sexism. But another explanation for Isis' lack of commercial success is the fact that its albums were uneven. Partly produced by New Orleans dynamo Allen Toussaint, Ain't No Backin' up Now is a decent but unremarkable album along the lines of Labelle and Tina Turner. Toussaint produced Labelle's most essential albums, although this LP (which has been out of print since the late '70s) lacks the excellence of Labelle gems like Nightbirds and Phoenix. Not surprisingly, the album's best songs (which include "Gold" and the funky title song) are the ones that were written by Toussaint instead of by lead singer Carol MacDonald, saxophonist Jeanie Fineberg, or other Isis members. With the right guidance and direction, Isis might have eventually developed into an outfit that was great instead of merely competent. But Isis broke up after this album, and it's safe to say that the vast majority of R&B fans have never even heard of the band.