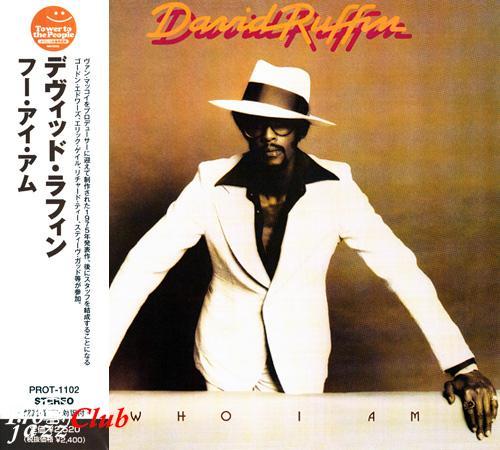 Лог создания рипа
Содержание индексной карты (.CUE)
AllMusic review by Lindsay Planer
On Who I Am (1975) former Temptations' vocalist David Ruffin joins forces with the multi-talented Van McCoy. McCoy – who produced and arranged the album – was a hot commodity thanks to his disco hit "The Hustle." Although Motown had relocated to Los Angeles, Ruffin and McCoy brought the project to New York City and availed themselves of the finest studio musicians that the Big Apple had to offer: Richard Tee (keyboards), Eric Gale (guitar), Hugh McCracken (guitar), and Steve Gadd (drums), just to mention a few. The opening midtempo title composition sets the pace and establishes the prevalent dance-centric nature. "It Takes All Kinds of People to Make a World" continues in the same four-on-the-four rhythmic vein with the McCoy-directed string section. Ruffin's "Walk Away from Love" – which actually made it all the way to the number one slot on the R&B Singles survey – bears an easygoing boogie enhanced by typical string and horn punctuations. Ruffin's begging lead vocals are reminders of his once golden throat. "I've Got Nothing but Time" and the light and lively "Finger Pointers" stand out as two of the catchier selections on the disc, the latter soaking up every McCoy element in the book – syrupy strings, a pulsating groove, and enough of a syncopated melody to hook even the most jaded listener. The slightly Eastern-flavored arrangement on "Wild Honey" provides a bit of much needed stylistic variety – although it doesn't stray too far – while "Heavy Love" is essentially structured as if remaking "The Hustle." No wonder it climbed into the upper reaches of the R&B countdown. "Statue of a Fool" proves that Ruffin can still churn out a heartfelt ballad. Granted his delivery doesn't have the gut-check realism that informed the best of his Temptations' and first couple of solo sides, however it is suitably matched to the half-hearted material. Who I Am concludes on an up note with the funky and driving "Love Can Be Hazardous to Your Health." Ruffin manages to coax out a few of his vintage tonsil-grinding growls as he pleads for the listener to "…beware…beware…beware" before instigating a lyrical call-and-response. The cut was twice a 7" bridesmaid, appearing as the B-side to both "Walk Away from Love" and "Heavy Love." Hip-O Select gathered Who I Am along with the artist's last Motown long-players Everything's Coming Up Love (1976) and In My Stride (1977), as well as a dozen previously unreleased bonus tracks for Motown Solo Albums, Vol. 2 (2006). The double-CD might prove difficult to find or pricey as it is a limited edition.