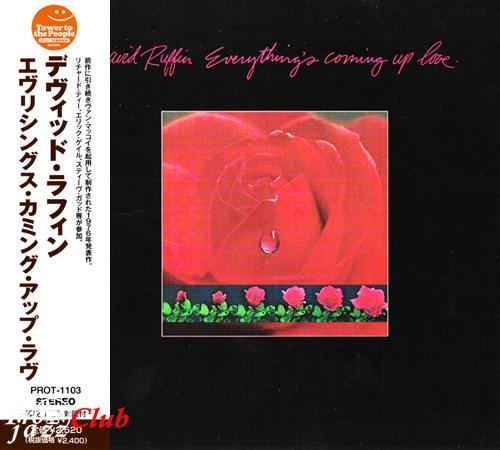 Треклист:
David Ruffin - Everything's Coming Up Love (1976) Жанр: Funk, Soul
Носитель: CD
Страна-производитель диска: Japan
Год издания: 2013
Издатель (лейбл): Motown
Номер по каталогу: PROT-1103
Аудиокодек: FLAC (*.flac)
Тип рипа: tracks+.cue
Битрейт аудио: lossless
Продолжительность: 36:59
Rip by JET 1
Наличие сканов в содержимом раздачи: да
Треклист:
01. Discover Me (4:29)
02. First Round Knock-Out (8:47)
03. Good Good Times (3:45)
04. On And Off (2:52)
05. Ready, Willing And Able (3:38)
06. Everything's Coming Up Love (4:58)
07. Let's Get Into Something (4:55)
08. Until We Said Goodbye (3:35)
Лог создания рипа
Содержание индексной карты (.CUE)
AllMusic review by Lindsay Planer
As he had done on Who I Am (1975), David Ruffin (vocals) teamed up with the multi-talented composer, arranger and producer Van McCoy for the follow-up Everything's Coming Up Love (1976). While certainly not a landmark in terms of Ruffin's artistic progression, the eight cuts definitely sound in sync with the concurrent plethora of danceable records spinning in the discotheques. McCoy again called on the finest instrumental support that the Big Apple had to offer with recording session stalwarts Richard Tee (keyboards), Eric Gale (guitar), Hugh McCracken (guitar), Steve Gadd (drums), and Ralph McDonald (percussion). Plus, Diane Destry (vocals), Brenda Hillard and Albert Bailey – better known as Faith, Hope & Charity. It is their angelic intonations that listeners are treated to during the opening of "Discover Me." McCoy's string and horn charts are ostensibly influenced by the Philly soul stylings of Leon Huff and Kenny Gamble. "First Round Knock Out" was a tune McCoy had initially written for two-time heavyweight champion, Smokin' Joe Frazier, which Motown put out in the fall of 1975. Ruffin's reading is clearly aimed for the dancefloor as the slinky, pulsating rhythm drives solidly for nearly nine minutes. Faith, Hope & Charity lend their breezy blend to the optimistic and reflective midtempo ballad "Good, Good Times." "On and Off" hearkens to the classic Motown sound with an easier, slightly syncopated beat that isn't as heavy as the typical fare on this project. "Ready Willing and Able" is a return to form for Ruffin as he unleashes his world-weary and soul-stirring wailing. The title song "Everything's Coming Up Love" is a rather blatant homage to Barry White's Love Unlimited Orchestra bearing more than a few similarities to the LUO's "Love's Theme." Although there are no slow, romantic numbers, the closer "Until We Say Goodbye" – one of two selections to have been penned by someone other than McCoy – adopts a sweet sentiment behind yet another disco-fied drone. The 45s "On and Off" b/w "No Matter Where" and "Everything's Coming Up Love" b/w "Statue of a Fool" – were issued as singles. Oddly, the flipsides came from earlier Ruffin LPs. In 2006 Hip-O Select compiled Everything's Coming Up Love (1975), In My Stride (1977), and a dozen-plus "bonus tracks" for the all-inclusive Motown Solo Albums, Vol. 2 (2006). The double-CD might prove difficult to find or pricey as it is a limited edition.