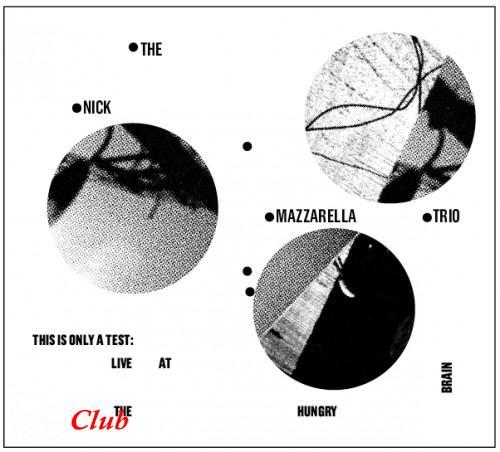 Треклист:
The Nick Mazzarella Trio
This Is Only A Test: Live At The Hungry Brain
Жанр: Free Jazz
Год издания: 2011
Издатель (лейбл): SONICHLA RECORDS
Номер по каталогу: 885767883475
Страна: USA
Аудиокодек: FLAC (*.flac)
Тип рипа: tracks+.cue
Битрейт аудио: lossless
Продолжительность: 00:55:58
Источник (релизер): IndieEmoPunk
Наличие сканов в содержимом раздачи: нет
Треклист:
1. This is Only a Test
2. Do Not Disturb
3. Sundown
4. Newsprint
5. Clockwork
6. For Henry
7. Boarding Pass
8. A Memory for Faces
9. Circumstantialism
Лог создания рипа
Содержание индексной карты (.CUE)
Об исполнителе (группе)
The Nick Mazzarella Trio (formed in 2008) features Chicago-based musicians Nick Mazzarella (alto saxophone), Anton Hatwich (bass), and Frank Rosaly (drums). The project is dedicated to exploring free jazz, improvisation, and the textural and interactive possibilities of the saxophone trio setting, while developing a repertoire of Mazzarella's original compositions. One of the most active working bands in the Chicago improvised music scene, the trio regularly performs at such venues as the Hungry Brain, the Hideout, Elastic, Skylark, Heaven Gallery, and the Whistler. nickmazzarella.com
Об альбоме (сборнике)
It's hard to listen This Is Only a Test, the new live album by alto saxophonist Nick Mazzarella, and not think of Ornette Coleman. The opening lick of the title track sounds suspiciously like the opening lick from Coleman's "The Fifth of Beethoven," cut 41 years ago with his classic quartet, and Mazzarella, 27, doesn't deny the influence. "Ornette is like a primary source," he says. "He planted his flag on something very fundamental, like Monk did, and it's hard to get close to the territory he staked out without becoming overshadowed by or raising the ghost of the original man."
Listen to the whole album, though, and it becomes clear that Mazzarella—whose excellent trio with bassist Anton Hatwich and drummer Frank Rosaly recorded the album live at the Hungry Brain last May—is doing much more than evoking Coleman. He's been listening to jazz since he was ten, beginning with classics from his father's collection (Louis Armstrong, Duke Ellington, Miles Davis, Charlie Parker) and progressing to John Coltrane, particularly Newport '63, in high school. "That record really changed things for me," he says. "It gave me a palpable sense of what my instrument could do and what a human being could express through improvisation." The Woodridge native didn't fall for Coleman till he was earning his bachelor's in music at DePaul.
He graduated in 2006, then returned the following year for a master's, by which time he was a regular at concerts presented by Umbrella Music. Soon he enlisted Hatwich and Rosaly, key figures in that community, to play in his trio; on This Is Only a Test, the group's second album together, the two of them keep a tight rein on the songs, maintaining a lithe, crisp drive. Many of Mazzarella's compositions borrow Coleman's ebullient, jaunty melodicism, but he often changes the mood when he takes an extended solo—his dark, visceral phrasing and strident tone recall fire breathers like Pharoah Sanders and Albert Ayler.
When Mazzarella isn't playing a horn, he's often fixing one. He apprentices at a shop in Downers Grove called BandSource, repairing reed and brass instruments, and he says he once did some emergency work on Josh Berman's cornet in the back of the Hungry Brain. As a sideman Mazzarella plays with Frank Rosaly's Green and Gold, a band dedicated to the music of Prince Lasha and Sonny Simmons, and in August he played in Rob Mazurek's Exploding Star Orchestra for the group's Whistler residency.
by Peter Margasak
Состав
Nick Mazzarella, alto saxophone & compositions
Anton Hatwich, bass
Frank Rosaly, drums
Any questions -> support@pro-jazz.com. По всем вопросам пишите -> support@pro-jazz.com
—
146
M0p94ok
Нет комментариев. Ваш будет первым!
Войдите или зарегистрируйтесь чтобы добавлять комментарии