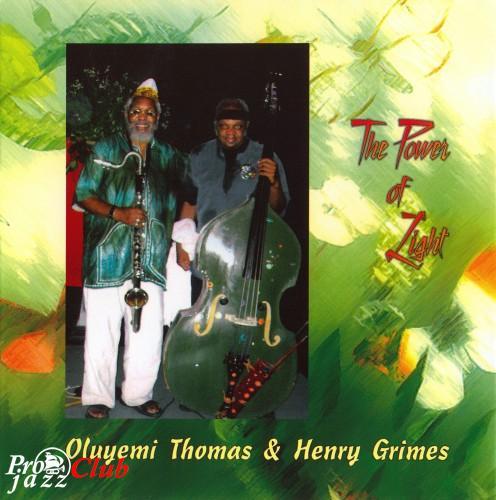 Треклист:
Oluyemi Thomas & Henry Grimes / The Power Of Light
Жанр: Free Jazz
Страна-производитель диска: Poland
Год издания: 2007
Издатель (лейбл): Nottwo
Номер по каталогу: MW 787-2
Аудиокодек: FLAC (*.flac)
Тип рипа: tracks+.cue
Битрейт аудио: lossless
Продолжительность: 60:06
Источник (релизер): CD
Наличие сканов в содержимом раздачи: да
Треклист:
1. Grace For The Race (9:38)
2. Water Of Thine Eternity (4:56)
3. Fractured Flow (9:22)
4. Brothers Telling Song (8:57)
5. Hidden Mystery (7:55)
6. Lightbathers In Soundwaves (5:37)
7. Dance Of The Planets Spirits Abounding (8:42)
8. Tabernacle (5:01)
http://www.nottwo.com/PelnaPlyta.php?Id=323&W=0
Лог создания рипа
Содержание индексной карты (.CUE)
Доп. информация
Recorded July 1, 2006 at ModernFormations Gallery and Perfomance Space, Pittsburgh, PA USA
Об альбоме (сборнике)
Once in a great while, a disc comes along that makes believing in the myths a bit easier. It puts the blues and the rituals of joyous communication beyond the craftily narrow constructs in which many half-hearted academics seek to trap them. Despite a slightly distant recording, this July 2006 concert is an immediate and powerful document of improvised music. More than that, it affirms again the voices of those brave souls, past and present, who dared to make this music what it is, to endow it with such multivalent and beautiful traditions, steeped in the language of victory over oppression. This meeting of veterans blends intuition and craft in a way that makes each player sound larger than life. Linger a while over Oluyemi Thomas’ overtone-drenched clarinet work on “Grace for the Race” for a startling and moving dose of raw humanity - murmurs, moans and outcries that run the emotional gamut. Yes, the blues are invoked, in extraordinary wails as brief as they are poignant. Thomas picks up where Eric Dolphy was tragically forced to leave off, delving deeper into the unconscious, augmenting his arsenal of “exotic” wind instruments with gongs, shakers and what sounds like small bells. If Thomas creates a world, Henry Grimes is the world beneath, rapping propulsion and rock-solid support into inspired technique. He too draws into what John Coltrane has labeled the reservoir from which all musicians drink, blues celebration pervading the opening of “Fractured Flow.” Plucked notes produce wondrously shadowy counterparts an octave or more above as the rhythmic solo builds, the point of most tension topped off by a transcendentally humorous rising bit of arco, a crowning gesture of which only the finest musicians are capable. On “Hidden Mystery,” Grimes’ arco work sounds as if it’s coming from two bassists, so wide are the intervals he’s mastered. As Thomas plays bells, Grimes covers the range of a string quartet, interweaving hushed harmonics with deft precision and exquisite taste. “Hidden Mystery,” demonstrates how well the two musicians’ approaches mesh; as Grimes lays down a spacious and constantly morphing series of patterns, Thomas responds with contrapuntal flute exhortations, the two becoming benevolent gatekeepers of world culture transmitted through the microtone. It’s too bad that the music they play, and the work of similarly intentioned keepers of the flame, are usually not afforded the recognition they deserve. Unfortunately, the truths they tell will go largely unheard amidst more polished and less insightful forays into improvisational rehash. ~ marc medwin, dustedmagazine.com
Recorded live at the Modern Formations Gallery in Pittsburgh, PA on July 1st of 2006. West Coast mystery man and reeds wizard, Oluyemi Thomas, has an ongoing project called Positive Knowledge with his wife & collaboator, Ijeoma Thomas. Each of their six discs is special, the essence of free music and positive knowledge. In the past decade, Oluyemi has also been collaborating with a number of other heavy free- spirited players like Alan Silva, William Parker, Eddie Gale and Sunny Murray. After a 35-year sabbatical, contrabass great, Henry Grimes has returned and is is fine form. Henry has kept pretty busy since his return in 2003, but can only be found on a handful of Cds so far. This duo is a wonderful thing and was well chosen, as each of these players specializes in cosmic spirit music. This disc captures their entire live one hour set, a suite that flows organically from one section to the next. In each section, Oluyemi solos on a different reed and each one is great. In between each solo by Oluyemi, Henry also takes a number of enchanting solos, sometimes with Oluyemi backing on mysterious percussion sounds like gongs, cymbals and hand percussion. Each solo by both of these men is a gem to behold. On Fractured Flow, they erupt intensely with some explosive bass clarinet and burning bowed bass. Oluyemi has a way of reaching deep into himself and talking through his horn. He often sounds as if he is animal talking in its own native language, speaking directly to those who choose to listen. This is a most impressive and free-flowing duo from two giants. ~ nottwo.com
Состав
Oluyemi Thomas - bass clarinet, soprano, musette, gong, flute, percussion
Henry Grimes - bass
Any questions -> support@pro-jazz.com. По всем вопросам пишите -> support@pro-jazz.com
—
170
M0p94ok
Нет комментариев. Ваш будет первым!
Войдите или зарегистрируйтесь чтобы добавлять комментарии