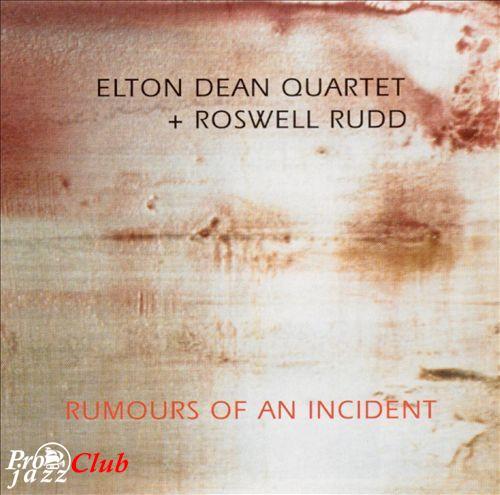 Треклист:
1. The Incident 41:15
2. The Goosebumps 16:23
Лог создания рипа
Содержание индексной карты (.CUE)
Лог проверки качества
Доп. информация:
Album Info & AMG Review
Recorded 26th Oct 1996 live at The Vortex, London by Dill Katz
Cover painting by John Gardiner
Inside photographs Andrew Putler
Ever since we met in Carla's band in '77 Ros and I have kept in touch, albeit only occasionally. So when the chance occurred to finally get together to play again we went for it. We had a great week and were pleased to get some down on tape. This was our second concert - here you have all the first set and the tail of the last.
Thanks everyone - great spirit.
Elton Dean
P.S. Ros 'fesses up to quoting "Strange City" by Herbie Nichols and "Hail Hail the gang's all here".
In which the Canterbury saxophone earl meets the prince of the trombone underground with a rhythm section in tow, this CD is a recording of most of the second concert of a weeklong engagement of the Elton Dean Quartet, with special guest Roswell Rudd. Rudd and Dean hadn't played together since 1977, when the pair met during a joint stint of Dean's band and Carla Bley's. The set is broken up into two parts: the first 41 minutes is the first set in its entirety, and the second piece, "The Goosebumps," is 16 minutes from the tail end of the second. Curious editing, but, nonetheless, this is compelling listening. Riveting even. It is difficult to believe, given the easy and nearly symbiotic repartee Dean and Rudd have -- especially on "The Incident," that they hadn't played together in nearly 20 years. Rudd's swinging vanguardism is in sharp contrast to Dean's angular, scalar investigations, but somehow they sidle together in a complimentary and quizzical fashion. Perhaps the bridge is in the solid rhythm section of pianist Alex Maguire, bassist Marcio Mattos, and drummer Mark Sanders. Rudd carries the heat of the proceeding, turning it up a notch ever three or four minutes, or as Dean flips the legato on for more of that knotty biting he does in harmonic inquiry. As Rudd cranks it, Dean backs off to consider and Maguire offers him bits and pieces of a rhythmic and tonal possibility, as the other two wait and watch, playing reactively rather than proactively, which is fine with this much activity going on. When Dean does re-enter the fray, it's to move Rudd's ideas, not vertically, but horizontally along the plane. But either way -- up, down, or sideways -- it moves with greased lightning and plenty of soul. This is a winner.
Состав
Roswell Rudd: trombone
Elton Dean: saxes
Alex Maguire: piano
Marcio Mattos: bass
Mark Sanders: drums
По всем вопросам пишите личное сообщение пользователю M0p94ok.
—
134
M0p94ok
Нет комментариев. Ваш будет первым!
Войдите или зарегистрируйтесь чтобы добавлять комментарии