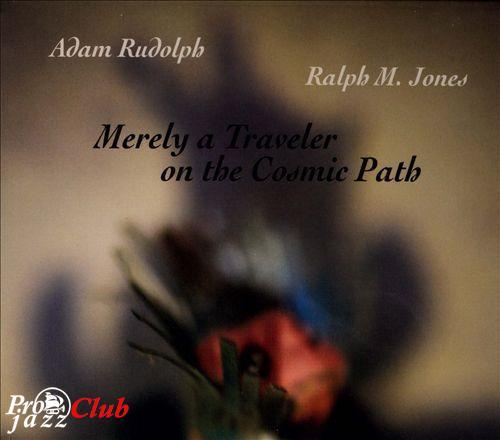 Треклист:
1) Spirit Voices 1:35
2) Storytelling 5:31
3) Illuminated 2:48
4) Rainbow Rivers of Skin 1:53
5) Fragrance of Compassion 2:51
6) Ballad of Questions 2:47
7) Refracted Splendor 4:14
8) Spectrum 2:09
9) Calligraphic 2:05
10) Wanderings 4:12
11) Starlit 2:09
12) The Poetry of You 1:51
13) Those Who Know, Will Know 1:45
14) (Who is?) Love's Lover 2:33
Лог создания рипа
Содержание индексной карты (.CUE)
Лог проверки качества
Доп. информация:
Meta Records Review
With Merely A Traveler on the Cosmic Path, Adam Rudolph and Ralph Jones present their first studio recording of their duet. Their first recorded collaboration, Yeyi was voted one of the years top 10 CDs by 2011 NY City Jazz Record. Dusty Groove called it "A dreamlike flow of elemental sounds and masterful moods” and Downtown Music Gallery said: “This is music to heal troubled minds and damaged souls. Yes indeed."
Great improvisers can create scintillating music in any situation or setting. But as Adam Rudolph can attest, the ability to transcend music and achieve something truly profound requires a sort of mysterious chemistry that comes along in precious few instances over the course of a musician’s lifetime.
“We can’t underestimate the element of alchemy,” Rudolph says.
With this new release on his own Meta Records label, the master percussionist celebrates a decades-long partnerships in which he’s found just that kind of alchemy. On Merely A Traveler on the Cosmic Path, Ralph Jones employs an arsenal of woodwind instruments to complement Rudolph’s percussion battery in a wide-ranging, deeply spiritual dialogue.
Born in 1955, handrummer, percussionist, composer, multi instrumentalist and improviser Rudolph has been hailed as “a pioneer in world music” by the New York Times. Currently he composes for his groups Moving Pictures, Hu: Vibrational, and Go: Organic Orchestra, a 15 – 50 piece ensemble for which he has developed an original music notation and conducting system. Over the past 25 years he has developed a unique syncretic approach to hand drumming in creative collaborations with outstanding artists of cross-cultural and improvised music, including Don Cherry, Jon Hassel, L. Shankar, Pharaoh Sanders, Fred Anderson, Hassan Hakmoun and Wadada Leo Smith among others.
Rudolph and Jones’ partnership dates back more then thirty years to the 1974 Ann Arbor Blues and Jazz Festival, where they performed on a bill that also included Sun Ra and James Brown. They were brought together by trumpeter Charles Moore, with whom they later cofounded the Eternal Wind quartet.
“I feel the most complete sense of understanding with Ralph,” Rudolph says, “which means that we have a profound kind of freedom. We understand each other on a creative level and on a philosophical level. I like to work with musicians who understand what I’m doing, not just musically but metaphorically.”
Rudolph’s refers to Jones as “the greatest woodwind player you may not have heard of,” and the description is apt. Jones’ wide-ranging career has included recordings and performances with the likes of Yusef Lateef, Pharaoh Sanders, Ahmed Abdul Malik, Ella Fitzgerald, Wadada Leo Smith, Ken Cox, Detroit’s MC5, and his own group, The Seekers of Truth Revolutionary Ensemble.
In addition, he has performed in Rudolph’s ensembles Moving Pictures and the Go: Organic Orchestra. The intuitive language that the two improvisers have developed over their lengthy collaboration is fully in evidence on Merely A Traveler on the Cosmic Path. Beautifully recorded and mixed in a state of the art studio, the music also includes sound samples of the musicians themselves made by Alexander Overington and Jeff Rona. Rudolph wove these samples into the fabric of the music to create an expanded and fascinating orchestration that sounds prototypical yet natural.
“It’s not trying to evoke nature itself so much as evoking naturalness,” Rudolph says. “The natural state of who we are, the real us as spiritual beings. You can still strive to be in tune with your naturalness in the 21st century, living in New York City.”
Merely a Traveler on the Cosmic Path (“N’zungi a nzilla” in KI-Kongo) is a Lembe initiatory proverb and refers to a way of living within nature towards which the artists strive. It also references the legacy of a culture that has rippled outwards to Kongo and from there over continents and generations, through to the African-American musical influences that Rudolph and Jones draw upon.
Over the course of the fourteen explorations that make up Merely a Traveler, Rudolph and Jones draw from a pool of shared knowledge – musical studies, each other’s music languages, their own prior interactions – to communicate with a penetrating and intuitive intensity.
“Over our long history of performance and research together we have created an extensive body of compositions and rhythmic and intervallic approaches that we can call upon,” Rudolph says. “And those elements are present in a pure, deconstructed form so that we can construct and orchestrate them any way we imagine to - in the moment - based upon listening to each other.”
Returning to the subject of that sonic alchemy that this recording so amply demonstrates, Rudolph likens the discovery of a musical soul mate to a romantic one. “You could list of reasons why you marry someone, but it comes down to a feeling. It’s something that you know from the get-go but also something that develops over time. Ultimately it’s a mystery.”
Состав
Adam Rudolph: Membranophones and Idiophones: handrumset (kongos, djembe, tarijas, zabumba), thumb piano, cup gongs, gongs, kongo slit drum, glockenspiel, percussion and percussion samples, electronics and sintir.
Ralph M. Jones: Aerophones: tenor & soprano saxophones, alto & c flutes, bass clarinet, ney, hulusi, umtshingo, bamboo flutes and piano.
По всем вопросам пишите личное сообщение пользователю M0p94ok.
—
299
M0p94ok
Нет комментариев. Ваш будет первым!
Войдите или зарегистрируйтесь чтобы добавлять комментарии