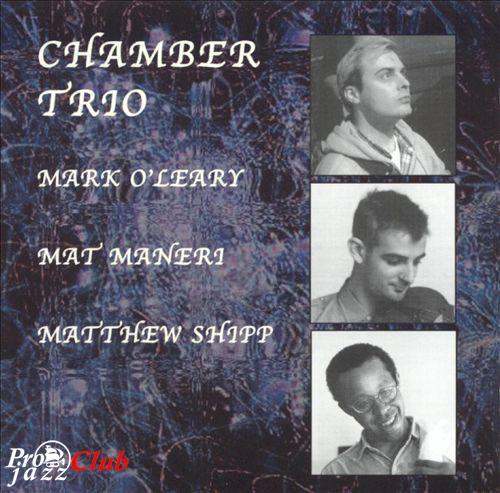 Треклист:
1. Jaunt 9:19
2. Simple Simon 6:37
3. Rest 8:24
4. I Am Not The Only One 8:24
5. Voice Crack 7:57
6. St. Ives 6:54
7. Ligeture 8:40
8. Kurts Park 9:01
Лог создания рипа
Содержание индексной карты (.CUE)
Лог проверки качества
Доп. информация:
Album Info & AMG Review
Music by Mark O'Leary, Mat Maneri, Matthew Shipp
Produced by Mark O'Leary & Leo Feigin
Recorded January 4, 2002 at Acoustic Recording, Brooklyn, New York
Recording engineer Michael Brorby
Mixed by Donncha Moynihan at the Hub, Cork
Edited by Harry Fulcher & Leo Feigin
Mark O'Leary's photo by Pat McArdle
Matthew Shipp's photo by Francesca Pfeffer
Liner notes by Steve Day
In July 2005, the noted avant-garde jazz label Leo Records released two albums featuring guitarist Mark O'Leary and violinist Mat Maneri (the other CD is titled Self-Luminous). Both sessions were recorded on the same day, January 4, 2002. Sitting at the piano, Matthew Shipp rounds out the pair on Chamber Trio. The music remains intentionally soft-spoken throughout the set, respecting the mood hinted at in the title. At times, Shipp is almost in cabaret mode, trickling high notes and sketching motives before coming back to playing slippery phantom chord changes. Maneri's signature sound -- a certain moaning quality of the bow, a way of fading in his contributions, as if he were using a volume pedal -- is a perfect match for O'Leary's almost unassertive style. This one is using a volume pedal. He also keeps his amp down, which makes each note sound like it is being squeezed out of the instrument with some effort. The effect is not quite unheard-of, but O'Leary takes it to a new level, especially in "Jaunt" and "Rest," two highlights. When he drops this technique to become more talkative (as in "Kurts Park"), his contribution loses some of its uniqueness, although he is a gifted player, with a strong sense of phrasing, which is not as widespread in free improvisation as one would think. By pointing to well-known modern composers, titles like "St. Ives" and "Ligeture" give away a few pieces of the puzzle, but they also mislead. After all, Chamber Trio is mostly dominated by the jazz ethos, thanks mostly to the keen sense of melody O'Leary and Maneri share, and the fact that Shipp is moonlighting as a bop player on a few tunes.
Состав
Mark O'Leary: guitar
Mat Maneri: viola
Matthew Shipp: piano
По всем вопросам пишите личное сообщение пользователю M0p94ok.
—
181
M0p94ok
Нет комментариев. Ваш будет первым!
Войдите или зарегистрируйтесь чтобы добавлять комментарии