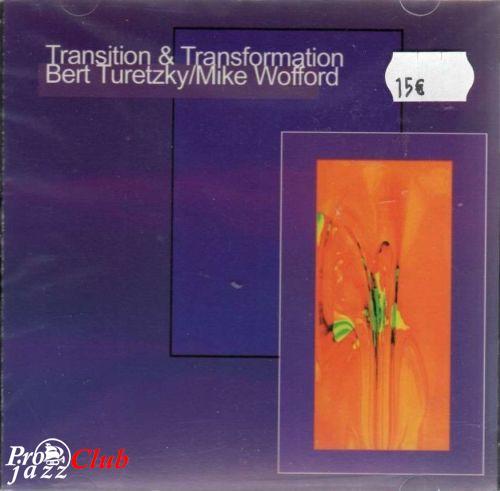 Треклист:
1. A Major Decision 4:53
2. Tamalpais 7:28
3. A Heated Discussion 4:40
4. Eclipse 9:11
5. Mysterioso 7:53
6. Short Subject-I 0:39
7. Short Subject-II 1:50
8. Short Subject-III 1:25
9. Ugly Beauty 6:33
10. Paper Trail 1:17
11. TRT 0:32
12. Slow Movement 5:03
13. Vocalese 2:03
Лог создания рипа
Содержание индексной карты (.CUE)
Лог проверки качества
Доп. информация:
Album Info & AAJ Review
(Wofford/Turetzky) - 1,6,8
(Oscar Pettiford) - 2
(Turetzky/Wofford) - 3,7,10,13
(Charles Mingus) - 4
(Thelonious Monk) - 5,9
(Turetzky) - 11
(Lewis/Turetzky/Wofford) - 12
Produced by Bert Turetzky & Mike Wofford
Recorded Fall 2000, @ Spraugeland Studios, Leucadia CA
Recording/editing/mixing eng. Peter Sprauge
Mastered by Wayne Peet
Cover art by Janos Negesy - Opus 79 (1990)
Layout & design: Jeff Atherton, Vinny Golia, & Bonnie Harkins
Liner notes: George E. Lewis, San Diego, Calif., December 6, 2000
Within seconds of hearing the opening strains of this album, it's obvious that Bert Turetzky and Mike Wofford are serious cats. At once visceral, studied, and passionate, the music leaps out of the speakers like a force of nature. Even when they cover tunes by Monk, Mingus, or Oscar Pettiford, the results are startlingly original. They avoid a common pitfall of virtuosity—although they are definitely expert players, they aren't hung up on sheer technique. Like all great players, they understand that the music comes first, and that great technique serves only as a vehicle to grasp at the mane of the muse.
Pianist Mike Wofford is known for his work with Sarah Vaughan, Benny Carter, and Ella Fitzgerald. His resume is lengthy and rich with famous names from the jazz mainstream, and his piano work on this album is enriched with vast references and experience. Bassist Bert Turetzky has many recordings, and has performed works by John Cage, Pauline Oliveros, Donald Erb, Iannis Xenakis, and Leo Smith. He is the author of the master bassist's bible The Contemporary Contrabass, and is a professor of music at the University of California in San Diego. He is one of the finest contrabass players I have ever heard! His understanding and utilization of extended techniques is formidable, but always used to advance the music, and never employed to simply call attention to the technique itself.
This music is grounded in the AACM tradition in many ways. Listeners familiar with the open-ended song forms and improvisational ideas of composers Muhal Richard Abrams, Wadada Leo Smith, Roscoe Mitchell, or The Art Ensemble of Chicago should find plenty of reference points in the music of this recording. Like Abrams, this music marries the dualism of light and dark, density and space, pleasure and pathos. This idea is elegantly detailed in Pettiford's "Tamalpais," one of the most sensitive interpretations of this piece I've ever heard. Like Leo Smith, they have a deep respect for tonal quality and timbral shading that bring ineffable emotional power to a melodic phrase. They share a commonality with Roscoe Mitchell in their use of stark contrasts between simply stated lines and very abstract harmonic underpinnings; and they resemble the AEC as a whole just because they have so much fun juggling genres and styles.
Fans of Monk or Mingus should check the versions of "Mysterioso," "Ugly Beauty," and "Eclipse" presented on this disk! The arrangements of these pieces are original, humorous, and revelatory.
This record is not for everyone (if you require a walking bass line, forget it!), but if you are a serious student of the upright bass, modern piano styles, or clever arrangements, don't hesitate to explore this music.
Состав
Bertram Turetzky: contrabass
Mike Wofford: piano
George Lewis: trombone
Glen Campbell: 1st cello
Mary Lindblom: 2nd cello
Lorie Kirkell: 3rd cello
Kristin Korb: vocals (4)
По всем вопросам пишите личное сообщение пользователю M0p94ok.
—
130
M0p94ok
Нет комментариев. Ваш будет первым!
Войдите или зарегистрируйтесь чтобы добавлять комментарии