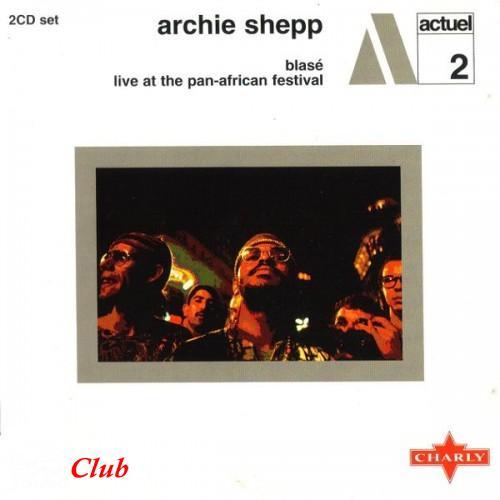 Треклист:
Archie Shepp - Blase / Live at the Pan-African Festival 2CDs
Жанр: Free Jazz
Год выпуска диска: 1969
Производитель диска: 2001, Charly Records Ltd. SNAF 819CD
Аудио кодек: APE
Тип рипа: image+.cue
Битрейт аудио: lossless
Продолжительность: cd1 41:08; cd2 47:20;
Трэклист:
CD1:
1. My Angel 10:11
2. Blase 10:27
3. There Is a Balm in Gilead 5:59
4. Sophisitcated Lady 5:13
5. Touareg 9:17
CD2:
1. Brotherhood 15:58
2. We Have Come Back 31:22
Archie Shepp — Sax (Tenor)
Jeanne Lee — Vocals
Clifford Thornton — Cornet
Lester Bowie — Trumpet, Flugelhorn
Grachan Moncur III — Trombone
Dave Burrell — Piano
Chicago Beau — Harmonica
Julio Finn — Harmonica
Alan Silva — Bass
Malachi Favors — Bass
Philly Joe Jones — Drums
Sunny Murray — Drums
Доп. информация:
скрытый текст
AMG:
"As the '60s drew to a close in a hail of blood and lead, jazz gradually began to close its doors. What had blossomed in the '50s and '60s as young men struggled to raise a music out of the whorehouses of New Orleans and into the concert halls turned into something less and more than it had been. Musicians like Archie Shepp no longer looked to the future or to what they might borrow from classical forms. Instead, they looked back to the cotton fields, the slave market, and the slum to find their voice. The music took an angry turn, emphatically stating, "This is our music." Stunned by the assassinations of Martin and Malcolm, many young musicians turned from a country and a culture they thought had betrayed them. Archie Shepp went to Paris. There, in the summer of 1969, he cut these albums, each a classic in its own right, each a milestone in an under-appreciated career. Blase looks back to the blues, soaked in harmonica and the brooding duet of Shepp's throaty tenor and Jeanne Lee's magnificent, pensive voice. The mood is dark, but proud and unyielding. This is the sound of those who have been wounded, those who will rise yet again. The overall effect is like some wonderful, alternate version of Porgy & Bess, an expression of hope and dignity where few would bother to look. The live record that closes the set finds Shepp reaching deeper into the music's past, going all the way to Algiers to play in the streets with whoever wants to lend a hand. The metaphoric value of that union is profoundly moving. The sound of the music is a joy, and one that will reward repeated listening. The '60s weren't a lot of fun for black musicians, regardless of what happened to flower power. This set is proof that for all the abuse that was heaped on them by their nation, for all the disappointments they endured, men and women could somehow emerge with their dignity intact."
EAC extraction logfiles
cd1
cd2
Any questions -> support@pro-jazz.com. По всем вопросам пишите -> support@pro-jazz.com
—
255
M0p94ok
Нет комментариев. Ваш будет первым!
Войдите или зарегистрируйтесь чтобы добавлять комментарии