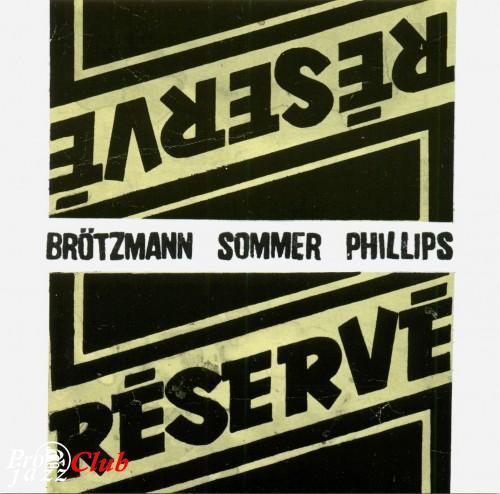 Треклист:
Brötzmann - Sommer - Phillips / Réservé
Жанр: Free Improvisation
Носитель: CD
Страна-производитель диска: Germany
Год издания: 1989
Издатель (лейбл): FMP
Номер по каталогу: CD 17
Аудиокодек: FLAC (*.flac)
Тип рипа: image+.cue
Битрейт аудио: lossless
Продолжительность: 74:43
Источник (релизер): CD
Наличие сканов в содержимом раздачи: нет
Треклист:
1. Réservé 31:05
2. On Walked Beep 35:02
3. Joya De Nicaragua 8:35
Лог создания рипа
Содержание индексной карты (.CUE)
Доп. информация: Recorded live during the "Total Music Meeting" on November 4th, 1988 at the Quartier Latin in Berlin.
Об альбоме (сборнике)
This 1989 recording by the duo of super-lunged saxophonist Peter Brötzman and percussionist Gunter Sommer with bassist supérieur Barre Phillips entering later was a reunion from the Total Music Meetings of the early '80s. None of the trio had played together for five years and -- suddenly -- here they were, together again for what proved to be a 75-minute set of spiritual and musical renewal. Phillips and Brötzman had been active in many ways during the break, but Sommers had explored a different path, one that landed him at the end of critics' barbs. This meeting was a chance to see not only if they could still play together and find the fire necessary to make sculptures of notes in midair, but to showcase how each man had grown as a musician. The first half-hour that comprises the title track has the duo coming out screaming, puncturing the air with ribbons of sound with nails attached. This is where each man establishes the ground he will speak to the others from. Phillips, not yet present, must have been astonished at what he heard from bongos and trap drums to voices. No wonder he wanted in so badly. He enters in the second half on "In Walked Beep." Phillips becomes the bridge by which true communication can happen. His bass playing filters each sound, each utterance, and mirrors it back to another player changed only by his own imagination, which clarifies -- not distorts -- the view of each soloist. This is not a cutting contest; this is a defining moment in the career of Sommers, who has more fire in his belly here that he had exhibited in the previous ten years combined. Phillips is the reason, the waterbearer who offered a safety net and a ledge to walk out on. This is what Coltrane talked about when he spoke of music that transcended music and became a cosmic language. The only difference being that, in these three men, there is no need for the cosmos when the earth is so full of passionate, unspeakable forces that need to be given utterance. By the end of the set, a short eight-minute improv named after some cigars Sommers had given Brötzman, the bridges are built, the towns erected, and the mountains moved. Communication has come from the silences of isolation and entered into the community of sound. Not a miracle, but an accomplishment to be sure.
Состав
Double Bass – Barre Phillips
Drums – Günter Sommer
Tenor Saxophone, Alto Saxophone, Bass Saxophone, Bass Clarinet, Design [Booklet] – Peter Brötzmann
По всем вопросам пишите личное сообщение пользователю M0p94ok.
—
147
M0p94ok
Нет комментариев. Ваш будет первым!
Войдите или зарегистрируйтесь чтобы добавлять комментарии