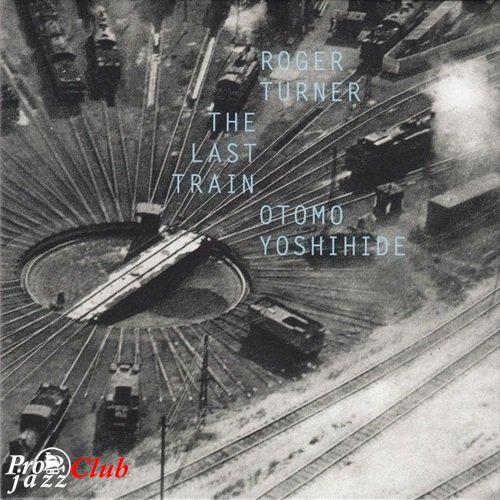 Треклист:
ROGER TURNER ' OTOMO YOSHIHIDE
THE LAST TRAIN
Жанр: Free Improvisation, Avant-Garde Jazz
Страна-производитель диска: UK
Год издания: 2015
Издатель (лейбл): Fataka
Номер по каталогу: 10
Аудиокодек: FLAC (*.flac)
Тип рипа: tracks+.cue
Битрейт аудио: lossless
Продолжительность: 40:23
Источник (релизер): спасибо MovingShadowy
Наличие сканов: front
Треклист:
1. THE WAIT
2. THE SIGN
3. CRACK
4. RUN
Лог создания рипа
Содержание индексной карты (.CUE)
Об альбоме
Recorded at Tokyo's Hara Museum in February 2013, this duo brings together London's Roger Turner on percussion with Japan's own Otomo Yoshihide on guitar and amplifier, an improv meeting of two masters with very different but equally impressive histories. Across four tracks ranging in length from four to sixteen-and-a-half minutes—forty minutes altogether—they give an object lesson in the art of duo improvisation, a format in which both players are constantly exposed with no easy place to hide, although that clearly holds no fear for either Turner or Otomo.
The exposed nature of duo playing means that both of them are clearly audible throughout, with the excellent recording capturing every detail and nuance perfectly. So, we get to hear all the minutiae of Turner's cymbal work, one of the key strengths of his playing as it ebbs and flows to complement Otomo's own peaks and troughs—the kind of fine detail that can all too easily be lost in a concert setting; while it can often be difficult to disagree with those who claim that improv is best experienced live, this album provides a powerful counter-example.
Otomo is just as impressive as Turner, producing a dazzling array of sounds that vary greatly in volume, timbre and tonal quality, the common denominator being their rightness for the moment in which they are played. At one extreme is the quiet filigree detail of "Crack," which is matched by similar restraint from Turner, at the other end of the spectrum the explosive Sturm und Drang of the same track's blistering climax. Throughout, Turner and Otomo are totally locked into each other, with the interactions between them radiating impressive levels of control, empathy and focus.
Without naming and shaming any culprits, it is worth reminding ourselves that duo improv is not always as easy as Turner and Otomo make it sound here; sometimes, opening exchanges can be tentative and, throughout, there can be occasional flat spots. But when it does work well, it sounds as natural as breathing and seems almost miraculous. The Last Train is one such case and should be savoured and celebrated as such.
4,5/5 stars
(John Eyles, AllAboutJazz)
Roger Turner - drum set, percussion
Otomo Yoshihide - guitar, amplifier
По всем вопросам пишите личное сообщение пользователю M0p94ok.
—
178
M0p94ok
Нет комментариев. Ваш будет первым!
Войдите или зарегистрируйтесь чтобы добавлять комментарии