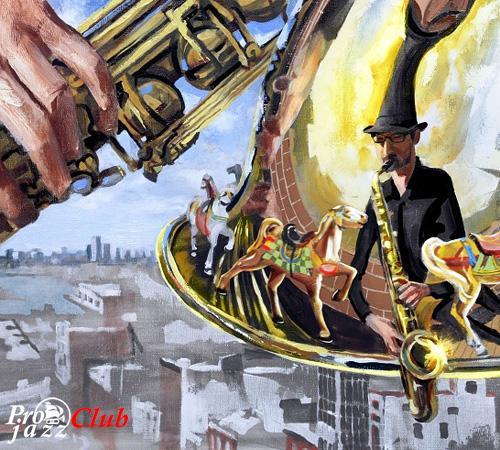 Треклист:
Johnny Butler - Carousel
Жанр: Avant-Garde / Modern Creative / Improvised & Experimental Music
Носитель: WEB
Страна-производитель диска (релиза): USA
Год издания: 2013
Издатель (лейбл): Self-released
Аудиокодек: FLAC (*.flac)
Тип рипа: tracks
Битрейт аудио: lossless
Продолжительность: 00:43:33
Источник (релизер): what.cd / спасибо kivius
Наличие сканов в содержимом раздачи: нет
Треклист:
1. Bowtie (06:26)
2. Carousel (05:44)
3. Two Clarinets (05:53)
4. Momma Bear (05:28)
5. Of Rose and Ice (06:20)
6. Drum Solo (07:05)
7. Stasis (06:34)
Доп. информация:
Musicians:
Johnny Butler - tenor sax, looping, effects
All songs written, performed, and recorded on tenor saxophone in real time
with no overdubs or samples by Johnny Butler
This album was recorded February-March 2011
Mastered by Colin Marston at MENEGROTH: The Thousand Caves, March 16, 2011
released 16 July 2013
Johnny Butler Official Site
Johnny Butler - Carousel bandcamp.com
... cover full ...
... photo ...
... info ...
I am an orphan, alone; nevertheless I am found everywhere. I am one, but opposed to myself. I am youth and old man at one and the same time. I have known neither father nor mother, because I have had to be fetched out of the deep like a fish, or fell like a white stone from heaven. In woods and mountains I roam, but I am hidden in the innermost soul of man. I am mortal for everyone, yet I am not touched by the cycle of aeons.
~ Carl Jung (on behalf of the stone monument at Bollingen in Memories, Dreams, Reflections)
* * *
If you weren’t told up front, it would be easy to assume that Carousel wasn’t a solo performance recording. The electronic washes sound like keyboard accompaniment. The rhythmic constructs sound like a percussionist at work. The layering of melodic lines gives the impression of multiple reed instruments at play. But it’s not. It’s just Johnny Butler, all by himself, manipulating his instrument with both its natural sound and the help with some pedals and looping and effects… all performed in real time with no overdubs or sampling.
Carousel sticks to a simple equation, then spends the album’s entirety providing different facets of those components. Pulsing cadences and languorous drones, and the beauty of this album is the way in which Butler shifts into one before backsliding back to the other.
Album opener “Bowtie” opens strong with with a quick step rhythm, bolstered by the looping of key clicks and curt sax phrases, and he builds that tempo up with an increasingly textured palette as a precursor to the low moan of the finale.
The title-track also begins similarly to “Bowtie,” but drops a linear approach for one that moves in tight circles. There is a palpable sense of dance to this song’s motion, even if only implied. That motion continues, but is juxtaposed against sonic washes of melodic drones that, eventually, saturate the entire song. The rhythmic element makes an appearance as the song reaches its conclusion, but it serves more as echo than counteraction of the low comforting murmur of sax.
“Two Clarinets” has both elements starting right out of the gate. Long slow soulful saxophone notes intermingle with patient bursts of notes looped through the eye of the melodic needle. No different than “Rose and Ice,” a nifty melody crosshatched with a lumbering cadence. It has a mournful presence, but emits warmth, not sorrow.
“Drum Solo” behaves like a Tom Waits performance, with its sly cadence and cool nonchalance with structure, and the added space-age sound effects and hammer clicks take it even further out to the fringes. And where “Drum Solo” leaned far heavier to the percussive element of this recording, album finale “Stasis” swings to the other extreme. A return to an atmospheric drift, of saxophone hovering just out of reach, a repetitive sigh atop a low pitched drone, and the echo of both in reply. And if “Drum Solo” is akin to Tom Waits, “Stasis” ranges far closer to the ambient excursions of Brain Eno’s Music for Airports.
Audiochecker 2.0 beta (build 457)
По всем вопросам пишите личное сообщение пользователю M0p94ok.
—
244
M0p94ok
Нет комментариев. Ваш будет первым!
Войдите или зарегистрируйтесь чтобы добавлять комментарии