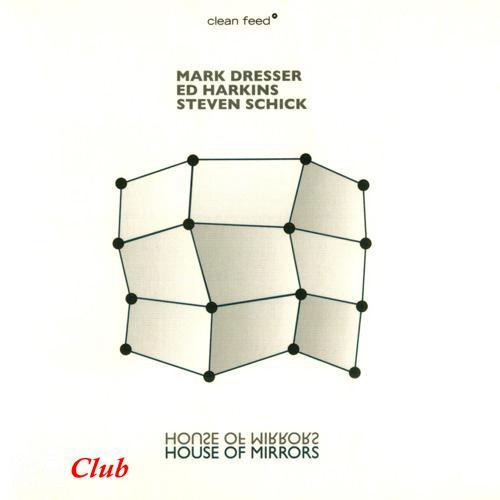 Наличие сканов в содержимом раздачи: да / *.jpg (300 dpi)
Треклист:
1. Xonia (11:15)
2. Flumbus (02:38)
3. Scrubble (04:43)
4. Oscula (15:02)
5. Rebus (03:37)
6. Floxy (01:39)
7. Moa (05:47)
8. Scuzzy (07:33)
All composition by Mark Dresser and Ed Harkins
Доп. информация:
Musicians:
Ed Harkins - trumpets (piccolo, reed, 2-bell, slide and modular) and mellophone
Mark Dresser - contrabass with "surrealist" pick-up system designed by Kent McLagan
Steven Schick - multiple percussion
Recorded and mastered in January 2006 at UCSD
Mark Dresser, Ed Harkins, Steven Schick - House of Mirrors cleanfeed-records.com
Mark Dresser, Ed Harkins, Steven Schick - House of Mirrors allaboutjazz.com
Mark Dresser Official Site
Mark Dresser from Wikipedia, the free encyclopedia
Steven Schick from Wikipedia, the free encyclopedia
... back ...
... photo ...
... review ...
Being Mark Dresser, the most "classical" of jazz/improvised music bassists today, it is no wonder we find him in the company of two of the most accomplished improvisers coming from the new and classical contemporary fields, Ed Harkins with the trumpet family (piccolo, reed, 2-bell, slide and modular) and Steven Schick on everything percussive, from skins to Chinese temple bells and gongs. But House of Mirrors project isn't similar to the interpretations of Iannis Xenakis, Roger Reynolds or John Luther Adams which the last two musicians are famed for. It was born from Harkins' and Dresser's investigations of complex rhythm, pitch and timbre, enriched by the contribution of Schick in terms of sound and texture. In the end, this is a proposal emerging from the frontier between what we call "jazz" and the experimental lab of the academic music world, combining in defiant and playful ways, under a solid concept, written open scores and structured improvisation. And if you think that the double bass has a limited range when compared to the varied palette of timbres of the trumpeter and the percussionist, think again: in the hands of Mark Dresser the bass is permanently reinvented. He's known for finding unusual ways to amplify his instrument. Here he uses a "surrealist" (not our term: you find it in the technical sheet of the CD) pick-up system designed by Kent McLagan, and sometimes he even prepares the giant fiddle very much like John Cage prepared the piano. In one instrument you have several. The magnification of sounds from the bass and the mutation of the other instruments will cause you to relate to them in surprising ways. The collaborators themselves said in an interview with music critic Bill Shoemaker, that in some passages of this recording they have difficulties recognizing who plays what. That says it all-the difference of roles assumed by the performers of this trio in relation to both conventional jazz and contemporary music is really something else, and undoubtedly superb.
~ cleanfeed-records.com
* * *
House of Mirrors is a remarkable project in collaborative music making. It began in 1999 when bassist Mark Dresser expressed interest in supplying tones to complex rhythmic materials developed experimentally by the composer and trumpeter Ed Harkins. Eventually what began long-distance between the Brooklyn-based Dresser and the Californian Harkins became a regular interaction in 2004 when Dresser joined Harkins on the faculty of University of California at San Diego. A year later percussionist Steven Schick, who has recorded the complete solo percussion music of Iannis Xenakis, made the group a trio. The work is some distance from Dresser's more improvisatory projects, closer to contemporary chamber music, with much of the music through-composed by Harkins and Dresser with spontaneously formed connective tissue.
The interest arises in the stunning complexity of Harkins' rhythmic language, from its sudden accelerations to the endlessly unraveling meters and shifting accents, creating a relationship between rhythmic forms of serialism and certain aspects of African polyrhythms. The results are highly unpredictable, pitch and time fused into new, yet seemingly absolute, relationships.
Given the level of mathematical complexity of this music, there's a surprising range of moods, from the manic playfulness of "Floxy" to the odd hurry-up-and-wait of the delays and flurries of "Moa." The 15-minute "Oscula" is particularly notable for the complexity of relationships that arise among the various instruments and the sometimes structuring roles of timbre and dynamics, the piece eventually evolving into near silence. Schick has commented that his first entry into the music was timbral rather than rhythmic and there's plenty of that here, his percussion seemingly rubbing the resonance of trumpet and bass as much as it participates rhythmically. "Rebus," with its whistles of cymbal and bass, contains wind sonorities that testify to Harkins' own powers of invention. Investigating a new rhythmic language, the trio also expands its own sonic palette.
~ Stuart Broomer ~ allaboutjazz.com
Лог создания рипа
Содержание индексной карты (.CUE)
auCDtect Task Manager
... релизы с участием MARK DRESSER на трекере ...
По всем вопросам пишите личное сообщение пользователю M0p94ok.
—
186
M0p94ok
Нет комментариев. Ваш будет первым!
Войдите или зарегистрируйтесь чтобы добавлять комментарии