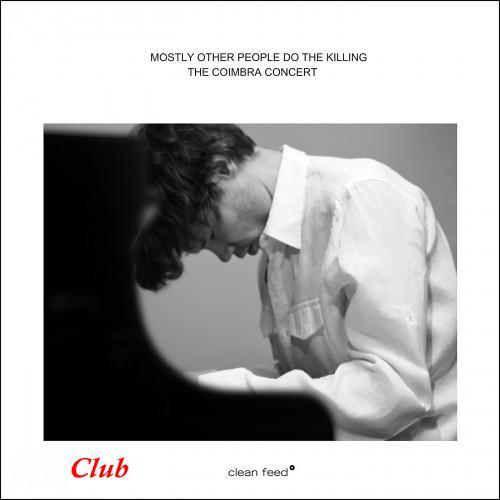 Треклист:
Mostly Other People Do The Killing
The Coimbra Concert
Жанр: Avant-Garde, Modern Jazz, Terrorist Be-Bop
Год издания диска: 2011, WEB
Издатель (лейбл): Clean Feed
Аудиокодек: FLAC (*.flac)
Тип рипа: tracks
Битрейт аудио: lossless
Продолжительность: 63:11 + 51:37
Наличие сканов в содержимом раздачи: нет
Источник (релизер): WEB (я)
Треклист:
CD1
1. Drainlick
2. Evans City
3. Round Bottom, Square Top
4. Blue Ball
CD2
1. Pen Argyl
2. Burning Well
3. Factoryville
4. St. Mary's Proctor
5. Elliott Mills
Moppa Elliott - Double Bass
Jon Irabagon - Tenor & Alto Saxophones
Peter Evans - Trumpet
Kevin Shea - Drums, Electronics
Лог Audiochecker
Reviews
Mostly Other People Do the Killing is proud to release their new live double-album on Clean Feed records. The two discs, made up of material culled from a three night stint at the Jazz ao Centro Festival in Coimbra, provide an excellent perspective on the way this quartet performs live. Unlike the previous four studio albums, all on Hot Cup Records, MOPDtK's live performances vary between short renditions of bassist Moppa Elliott's compositions, and sweeping suites encompassing many compositions. This free-association style of performing has developed over the seven years that the quartet has been performing and recording together.
The four members, Peter Evans, Jon Irabagon, Moppa Elliott, and Kevin Shea, have developed a style of performance in which each member is free to steer the group in any way they choose. The other members may or may not follow suit, creating a type of group interplay that often pits the individuals against each other. Within any given performance, an individual may try to cue a new composition, a return to the original melody, or other structural device, only to be vetoed, creating music that often features multiple chains of association simultaneously. In addition, the members of MOPDtK are not afraid to lay out and allow each other ample solo space.One of the most exciting and innovative bands on the modern jazz scene, Mostly Other People Do the Killing is a jazz ensemble consisting of Peter Evans on trumpet, Jon Irabagon on tenor and sopranino saxophones, Moppa Elliott on bass and Kevin Shea on drums. What makes the band so much fun to follow is the impish delight they take in making music, from the delightful spoof covers to wryly quoting famous jazz songs amidst their original compositions. But make no mistake, their music is taken seriously and played with a very high degree of competence. This double live album was recorded live in Portugal and marks their first appearance on a label other than Hot Cup. Filled with fun, infectious and utterly enjoyable music. They play Ornette-ish free bop with sly quotes of other music, like sneaking in "Night in Tunisia" amidst the massive 30+ "Blue Ball" which anchors the first disc and evolves like a suite with a wonderful sense of timing and balance. "Pen Argyl" features smoking hot collective improvisation with fire to burn. "Burning Well" showcases Evans on a scorching strong trumpet solo, building up a riotous energy between the instruments, with epic drumming and bass pulse prod the horns on to ever greater heights. Wonderful, almost telepathic interplay amongst the band members is a key component of the music. "Factoryville" built around a thick and dexterous bass solo. The trumpet and tenor saxophone intertwine nicely over funky backbeat, getting a feel akin to classic Jazz Messengers albums. There's a quieter interlude midway through for light trumpet, bass and bells. The music slowly picks up speed and intensity with a growing saxophone solo. "St. Mary’s" has strong up-tempo full band interplay, followed by a playful spacey droning interlude and light soft horn interplay, intricate and deep. Picks the pace back up slowly in a dynamic fashion. "Elliott Mills" wraps up this wonderful album with a fast paced funky fun coda.
:)