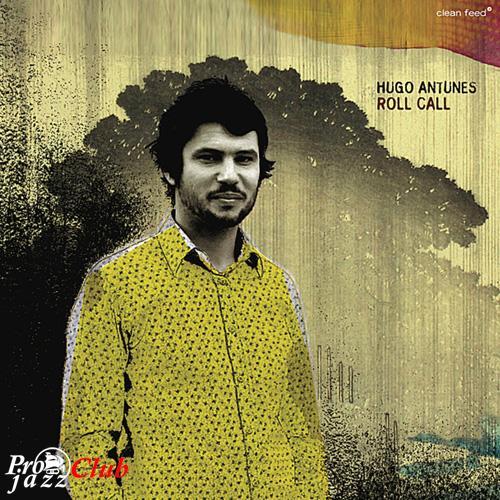 Треклист:
Hugo Antunes - Roll Call
Жанр: Avant-Garde Jazz / Modern Creative
Носитель: CD
Страна-производитель диска (релиза): Portugal
Год издания: 2010
Издатель (лейбл): Clean Feed
Номер по каталогу: CF197CD
Аудиокодек: FLAC (*.flac)
Тип рипа: tracks+.cue
Битрейт аудио: lossless
Продолжительность: 00:43:52
Источник (релизер): what.cd / спасибо 6060842
Наличие сканов в содержимом раздачи: нет
Треклист:
1. Dukkha (09:16)
2. Roll Call (09:38)
3. Hoyspenning (06:28)
4. Anfra (06:13)
5. Einfach (06:07)
6. Anfra (Alternate Take) (06:08)
Доп. информация:
Musicians:
Hugo Antunes - double bass
Daniele Martini - tenor saxophone
Toine Thys - tenor saxophone, soprano saxophone, bass clarinet
João Lobo - drums
Marek Patrman - drums
Recorded on September 3rd
Hugo Antunes Official Site
Hugo Antunes from Wikipedia, the free encyclopedia
... photo ...
... reviews ...
Two Portuguese, a Belgium, an Italian and a Czech: this is a true European combo. Combo? Well, not the conventional one: there are two drummers, João Lobo and Marek Patrman, and two horn players, Daniele Martini and Toine Thys. The band leader, Hugo Antunes, plays the only lone instrument, the double bass, being the axis of everything happening. All the pieces are structures for improvisation, and if Antunes' writing is intended to ignite musical situations, as points of departure, it's also the result of a research work, in order to achieve the idea, and its realization, of "an unique act of creation, of absolute artistic freedom, in which all the participants are, simultaneously, composers and interpreters". There's nothing new in it, but it's also true that the old aspiration to master "real time composition" is a work-in-progress with no end on sight. That's a mission in itself, and these five young improvisers are totally commited to it.
Antunes has already an envyable international career, with the likes of Adam Lane, Michael Attias, Alexandra Samsonova, Jesus Santandreu, Benny Lackner, Robin Verheyen and Alexi Tuomarila, among others, and is involved in projects like Loopless, Velkro and Noi Trio. Lobo plays frequently with Enrico Rava, Alexandra Grimal, Giovanni Guidi, Carlos Bica, Scott Fields and had the opportunity to share experiences with Roswell Rudd, Gianluca Petrella, Julian Arguelles and John Hebert. Daniele Martini had John Abercrombie, Adam Nussbaum and Bert Joris as stage partners and is involved in an afro-beat band with Neco Novellas and Oghene Kologbo, from the legendary Fela Kuti's Afro 70. Thys leads the groups Toine Thys Hammond Trio, Take the Duck and Rackham, and played, for instance, with Ben Monder, Andrew D'Angelo, Chris Cheek and Rick Margitza. Patrman has Erik Vermeulen, John Ruocco and Ben Sluijs as usual companions. They're right in the middle of the new jazz scene, and you're gonna hear (about) them more often. Start now.
~ cleanfeed-records.com
There are albums when you know from the very first minutes that something is "right" : in the fit of the musicians, the approach, the sound, the freedom. This is one of those albums, and one with an unusual line-up at that : with two saxes - Daniele Martini and Toine Thys, two drummers - João Lobo and Marek Patrman, and one forceful bass, played by Portuguese Hugo Antunes.
The first piece is a rhythmic delight of soft-spoken horns engaging deeply in free form, with a solid and subtle bass as the anchorpoint, with both drummers creating a great background of percussive shifting colors. The title track does what it says, a "roll call" of the various musicians, each one presenting himself, as an invitation for the others to welcome by joining the created context, then leaving for the short solo moment to the next instrument, and so on. The result is nice because each musician adds his own touch and approach, basically telling his story in a few notes, with the other musicians completing it together, which gives the piece a suit-like nature.
The third track starts with a long bass intro, setting a steady pulse over which both saxes weave a slow, ethereal and yearning sound."Anfra" is more boppish, "Einfach" more subdued and atmospheric.
I will not review every track, but you get the picture, this beyond bop and post-bop, capturing the complexity, the improvisational power, the freedom and the emotional depth that are so the essence of jazz.
~ freejazzblog.org
Лог создания рипа
Содержание индексной карты (.CUE)
По всем вопросам пишите личное сообщение пользователю M0p94ok.
—
206
M0p94ok
Нет комментариев. Ваш будет первым!
Войдите или зарегистрируйтесь чтобы добавлять комментарии