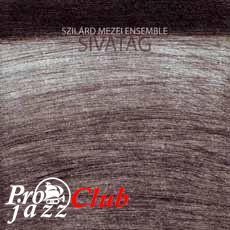 Треклист:
1. Warszawa Sketch 14:21
2. Vizfeny (Eszak) / Waterlight (North) 11:50
3. Sivatag / Desert 33:58
Лог создания рипа
Содержание индексной карты (.CUE)
Лог проверки качества
Доп. информация:
Album & Artist Info
Compositions by Szilard Mezei
Recorded 14 November 2006, by Sasa Milankov & Lazar Zivanac, Studio "Vilenjak", Novi Sad, Serbia
Graphic work: Erszebet Mezei
Cover design: UNITgraphics.com
Text translation by Marko Gregoric
Liner notes: Neven Usumovic
"From the very beginnings of his musical activity, Szilárd Mezei (born in 1974) appears both as an instrumentalist and composer (and a conductor of ensemble). He has searched for his creative landmarks in the avant-garde tendencies of classical music, as well as, primarily, in free jazz (in the direction given to the latter by Anthony Braxton), that is, in a broader sense, in improvisation. His creative development has been influenced by the fact that these beginnings took place in the environment of the theatre (in the early nineties, Mezei was writing and performing music for the performances of the theatrical ensemble AIOWA, then for the Jel Színház and other formations of the already famous Hungarian-French stage-manager and dancer József Nagy, who also shares his origins with Mezei, being a member of the Hungarian national minority in Vojvodina, the autonomous region of Serbia), which brought Mezei into a direct relationship with the performance side of music and the possibility of its staging.
The substantial and ideological tendencies of Mezei's rich creativity are hardly comprehensible without a certain acquaintance with his extraordinary erudition, the spirit of research based on the spiritual world of the primordial Tradition, but also on modern art and its revolt against the "measuring of the world" carried out by the rationalistic mind of the West. This spiritual background already ostensibly reveals itself in the symbolic titles of Mezei's albums and compositions, but, of course, in his texts and interviews as well. The ideological soundness of the work of the Hungarian thinker Béla Hamvas (1892-1968), the great works of Béla Bartók (1888-1946), and among living composers the musical dignity (which unites the endeavours of these two Hungarian geniuses) of György Szabados, offer Mezei an interior basis which gives direction and force to his own musical efforts.
Orientation towards the Tradition leads Mezei, in his primary role as jazz musician, to a reinterpretation of the jazz tradition, replacing that which in the history of jazz represents the African heritage and the tradition of "black America", by the-in the European context-extremely lively and peculiar tradition of Hungarian folk music, as well as by the music of the great Oriental sacral traditions. So no wonder that it is, notwithstanding all this, very difficult to foresee what Mezei will do next: his jazz is genuinely inspired by the great achievements of modern classical music (as well as Bartók, one must also mention Lutoslawski), as well as by the original folk tradition. One thing however is sure: for now, we won't find in Mezei any trace of the nowadays very popular "post-fusion" jazz tunes, no experimentation with electronic pop-music, hip-hop or noise-rock!
All that we have said up to now makes us realise the specific programmatic character of this music. This character derives not only from the ideological richness of Mezei's creativity, but often from its (the music's) predestination for the stage as well. Mezei's scenic imagination had the luck to be continually developing due to the stimulating creative cooperation with artists like his sister, the actress and stage-manager Kinga Mezei, then with András Urbán, Tibor Várszegi, as well as with József Nagy already mentioned. As if this continual contact with the stage reflected itself on the orchestration and the musical dramaturgy of his compositions, in which we sometimes find a real "distribution of the parts", and the musical dialogue and monologue-of which the latter is so typical of jazz-assume here, in the strict sense of the word, dramatic proportions!
Состав
Gergely Ittzes: flute, alto flute, piccolo
Svetlana Novakovic: flute
Alfred Asztalos: clarinet
Bogdan Rankovic: bass clarinet
Branislav Aksin: trombone
Kornel Papista: tuba
Szilard Mezei: viola, lead.
Albert Markos: violoncello
Ervin Malina: double bass
Istvan Csik: percussions
Any questions -> support@pro-jazz.com. По всем вопросам пишите -> support@pro-jazz.com
—
148
M0p94ok
Нет комментариев. Ваш будет первым!
Войдите или зарегистрируйтесь чтобы добавлять комментарии