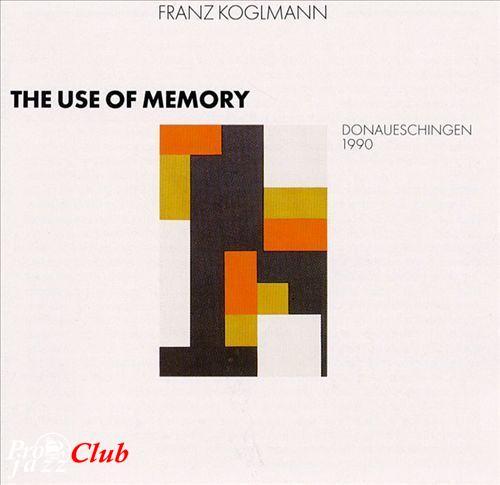 Треклист:
1. Chateau De Bouges 9:39
2. For Max 4:33
3. The Use Of Memory: Bix, Miles And Chet 7:39
4. Das Ratsel Eines Tages 6:54
5. Der Vogel 10:12
6. Uccello 6:26
7. Monoblue 6:21
8. Die Kuhle, Der Duft, Der Glanz 6:16
9. Constantin's Dream 6:29
Лог создания рипа
Содержание индексной карты (.CUE)
Лог проверки качества
Доп. информация:
Album Info & AMG Review
1. dedicated to Alain Resnais
2. dedicated to Max Aichinger
3. quoting from Miles Davis' 'Tune Up', passages from an improvisation by Chet Baker on 'Tune Up' and Larry Shields' 'Clarinet Marmelade'
4. inspired by Giorgio de Chirico
5. dedicated to Jean Cocteau
7. dedicated to Yves Klein
8. hommage a Franz Schubert, dedicated to Ingrid Karl
9. inspired by Piero della Francesca
All compositions by Franz Koglmann
Digital two-track recording by Peter Pfister on October 22-24, 1990 at Theater Westend, Zurich/Switzerland
Cover painting: Helmut Federle, Form des Verhaltnisses in drei Variationen, 1990, oil on canvas, 60x40 cm.
Liner notes: Peter Niklas Wilson, January 1991
Photo: Dany Gignoux
Design: Walter Bosshardt
Produced by Werner Wunderlich, Pia and Werner X. Uehlinger
This live debut of Franz Koglmann's mammoth work The Use of Memory, in nine sections or movements, was heralded not by the triumph of cheers and the awe of applause, but by critical remarks from journalists with hard-line views of what jazz "is" or "isn't." Too bad. Americans have come more and more to view Euro-jazz as its own thing that has little to do with the music of origin but is no less valid, and have also accepted classical music -- including "new music" -- for decades. Apparently, those busy carving out an identity from an inferiority complex find it impossible to hear genius when it is right in front of them, bleating its heart out. The Use of Memory is a stellar achievement, and a great thank you to Hat Hut is warranted for recording this first performance. This is a suite that has all the earmarks of a symphony, or a symphony that has the emotive and improvisatory ability to be a full-blown jazz suite. But it is neither. This work so thoroughly combines jazz, "new music," and Western classical music that it is almost impossible to separate the threads. Praise the lord. Utilizing the gifts of 13 players -- including himself -- and the conducting expertise of Gustav Bauer, Koglmann realized a dream. He created with his Pipetet -- a group that also includes pianos and electric guitars as well as reeds and woodwinds -- a place where music becomes nothing other than itself. It becomes what it recalls as being true from its origins and moves on, picking up along the way other memories as passengers, weaving them into its fabric. Koglmann has his players and audiences moving through everything from Berg to Ellington, Stravinsky, Miles, Gil Evans, George Russell, Schoenberg, Stockhausen, Mahler, Webern, Armstrong, Basie, Beiderbecke, Coltrane, Cowell, Cage, and even Wagner -- and so many more you would have to hear it a thousand times to note them all. This is a love song, ultimately, a swinging yet meditative and tender amorous paean to not only Koglmann's heroes, but to his dream of a music that contains no genres -- only beauty. And on this recording, he's gone further than any of his predecessors to making it a reality.
Состав
Franz Koglmann Pipetet:
Mario Arcari: oboe & english horn
Martin Schelling: clarinet & bassclarinet
Tony Coe: clarinet, bassclarinet & tenorsaxophone
Roberto Ottaviano: soprano- & sopraninosaxophone
Guillermo Gregorio: altosaxophone
Franz Koglmann: flugelhorn
Jean-Christophe Mastnak: french horn
Radu Malfatti: trombone
Raoul Herget: tuba
Burkhard Stangl: guitar
Robert M. Weiss: piano
Klaus Koch: bass
Fritz Hauser: drums
Conducted by Gustav Bauer
По всем вопросам пишите личное сообщение пользователю M0p94ok.
—
361
M0p94ok
Нет комментариев. Ваш будет первым!
Войдите или зарегистрируйтесь чтобы добавлять комментарии