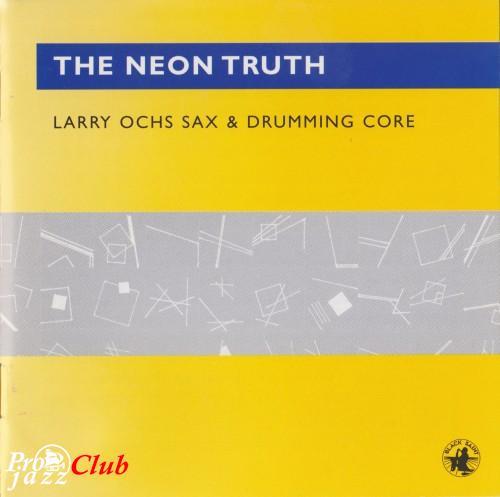 Треклист:
Larry Ochs Sax & Drumming Core - The Neon Truth
Жанр: Avant Garde Jazz
Страна-производитель диска: Italy
Год издания: 2002
Издатель (лейбл): Black Saint Records
Номер по каталогу: BSR 120 217-2
Аудиокодек: FLAC (*.flac)
Тип рипа: tracks+.cue
Битрейт аудио: lossless
Продолжительность: 50:31
Источник (релизер): собственный рип с оригинального диска.
Наличие сканов в содержимом раздачи: да
Треклист:
01. Wrong Right Wrong 6:31
02. The Neon Truth 4:20
03. Give Me 209 2:45
04. Finn Crosses Mars 11:49
05. Xanic Rides Again 6:44
06. And Nothing But... 2:30
07. Red Shift 14:01
08. Blues Keep Calling 1:51
Лог создания рипа
Содержание индексной карты (.CUE)
Доп. информация:
Recorded August 2000 at Mr. Toad's in San Francisco.
Об альбоме (last.fm)
Saxophonist Larry Ochs was born in N.Y.C. in 1949. Although he studied the trumpet a bit, he is most accomplished on the tenor and sopranino saxophones. Ochs has experience in musical production, as well, having founded Metalanguage Records in 1978, and owned and operated northern California’s Twelve Stars Studio. A co-founder of the world-renowned saxophone quartet Rova, Ochs has received Meet the Composer grants from across the U.S. and commissions from various programs throughout the ’80s and ’90s (including the year-long festival Antwerpen ‘93).
He composed music for Leslie Scalapino’s play Goya’s L.A. (1994) and for the film Letters Not About Love, winner of the 1998 South by Southwest Film Festival’s best documentary film. Ochs was a founding member of the Glenn Spearman Double Trio (Black Saint) and is a member of the new music trio Room. Still active in Rova, he also played in What We Live, a trio that released three albums by the end of the ’90s. Ochs formed his Sax & Drums Core as the millenium turned, releasing Neon Truth on his own imprint in 2002 and then moved to Atavistic for 2007’s Up from Under.
Об альбоме (Howard Mandel / Downbeat)
Larry Ochs, co-founder in 1977 of the ROVA Saxophone Quartet, is one of America’s most tenacious reedists. With considerable focus and depth, a big, craggy tone on tenor sax, an often sniggly, penetrating one on sopranino and more imaginative twists than have been widely acknowledged, Ochs won’t let go of the idea that applying his guts and smarts to his horns’ far reaches results in transcendent sonic art. These two projects—a studio recording with two drummers and a concert recording of his working trio—demonstrate Ochs’ breadth, raw feeling and simultaneous sensitivity. Both albums are strong, provocative and as far from easy listening as possible. But they are both very satisfying and suggest strategies that comprise “free” improvisation while moving beyond it.
Ochs explains his method in liners to The Neon Truth, explaining that on “Finn Crosses Mars” he starts with a spontaneously inspired passage—a line or “field”—varies it, phases in a second idea while phasing out the first, and has the drummers phase in and out of each others’ efforts. He writes that the piece always follows the same plot: “start ‘free’; locking into the phasing process as a trio; a drum duo; a brief final trio and a short closing head.”
What makes the music entrancing, though, is the variety of Ochs’ motives, phraseology and narratives. On “The Neon Truth,” he intimates the ache of klezmer clarinetists using sopranino, without lapsing into idiomatic cliché; on the 14-minute “Red Shift” he turns ghostly high tones into multiphonic quaver. Drummers Don Robinson and Scott Amendola listen closely to the saxist as well as to each other; they modulate their volumes and employ unbound creativity.
Об альбоме (ochs.cc)
Larry Ochs Sax & Drumming Core was formed in June 2000 as the trio of saxophone and 2 drummers for a special “concept album” that Ochs wanted to record. The Core's music then (and now): a meditation on and a 21st-century distillation of the songs and sounds of American and eastern European blues-shouters, and of traditional chant-singers from Asia and Africa. Many of these vocalists can be heard working in a similar context: backed by one string player, or one hand drummer, or two background singers. This is the space that this band originally went after. But then, it must be said, the end result is modern, as in “urban.”
Об альбоме (by Steve Loewy)
Inspired by Asian and African forms, Larry Ochs calls his sax and double-drum trio "Larry Ochs Sax & Drumming Core," and the minimal and unusual instrumentation is an effective vehicle for his intense improvisations.
While fans of Ochs may not find his playing here much different than elsewhere, the new instrumentation gives it a new perspective that succeeds in carving a small but exciting niche.
Состав
Larry Ochs - tenor and sopranino saxophones
Donald Robinson - drums
Scott Amendola - drums
Any questions -> support@pro-jazz.com. По всем вопросам пишите -> support@pro-jazz.com
—
164
M0p94ok
Нет комментариев. Ваш будет первым!
Войдите или зарегистрируйтесь чтобы добавлять комментарии