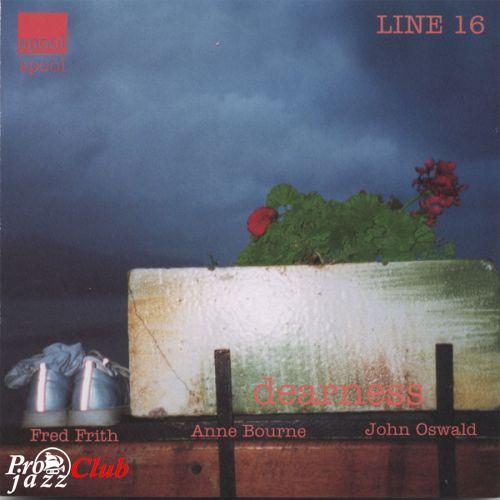 Треклист:
1. A Walk Is An Adventure
2. Three Hundred Ears And An Ocean
3. Lower Flower
Лог создания рипа
Содержание индексной карты (.CUE)
Лог проверки качества
Доп. информация:
Album Info & AMG Review
Recorded live at the Rivoli, Toronto in August 1998
Concert produced by Rough Idea
Recording facilitated by Phil Strong
Mastered by Myles Boisen at Headless Buddha Mastering Labs, Oakland
Cover photo: Heike Liss
Special thanks to Ron Gaskin
Dedicated to Willa, with love
Cellist Anne Bourne is best known for her appearances on albums by Jane Siberry, Loreena McKennitt, and Holly Cole. Her activities as a free improviser have been documented only sporadically. Dearness puts her between two long-runners on the avant-garde circuit: Canadian saxophonist John Oswald and British guitarist Fred Frith. This session was recorded live in August 1998, but came out only four years later. It is not particularly strong, especially if one looks at it from Frith's ample discography, but it still has its shining moments. The album contains three pieces, but the first one accounts for 39 of the 46 minutes it lasts. Bourne leads the way most of the time, either with her deep cello drones, soaring instant melodies, or dreamy vocalizations. Frith provides textures, lightly hammering the strings of his electric guitar, occasionally shifting to long notes faded in with a volume pedal, and even getting into a straight-away solo at the end of the first piece. He also joins in on vocals. Oswald remains very quiet throughout, seemingly unassuming but providing a backdrop of quiet staccato blurps and clicks (much like what he was doing at the time in CCMC -- see aCCoMpliCes). It makes Dearness a mostly ambient adventure. "Three Hundred Ears and an Ocean" sparks a few flames, with Frith and Oswald getting excited and lively. Audience noises get in the way of what sounds at times like an informal meeting: good-humored and lacking a bit of discipline. It must have been a good concert, but on disc it lacks challenge.
Состав
Fred Frith: guitar, voice
Anne Bourne: cello, voice
John Oswald: alto sax, voice
По всем вопросам пишите личное сообщение пользователю M0p94ok.
—
216
M0p94ok
Нет комментариев. Ваш будет первым!
Войдите или зарегистрируйтесь чтобы добавлять комментарии