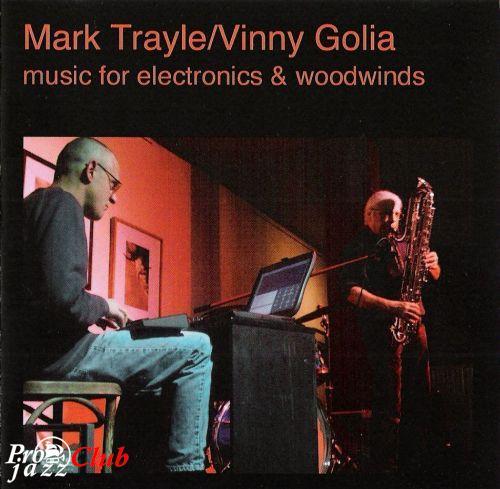 Треклист:
1 Shelfish 7:50
2 This Clown Is Crashing 6:51
3 Cheapman And The Sweater He Cherished 6:03
4 If You Feed The Bears They Come Back For More 9:06
5 Imparticles 6:54
6 Signature Metric 5:11
7 Lazy Third Eye 8:15
8 Gilbert Was Vague 8:20
9 Behind The Fifty-Five Dollar Face 3:08
Лог создания рипа
Содержание индексной карты (.CUE)
Лог проверки качества
Доп. информация:
AMG Review
Few musicians have continuously and consistently performed with the creative spark that marks the performances of Vinny Golia. For years -- even decades -- he has quietly produced a body of work that rivals the discographies of the most accomplished and innovative freestyle improvisers, including Anthony Braxton. From presenting solo recitals on a plethora of reeds, to leading small groups, to composing for his big bands, Golia seems never to stop thinking of new ways to water his fertile imagination. Here, he performs duets with electronics whiz Mark Trayle, and the fascinating results offer a different side of Golia. While the saxophonist performs on a variety of reeds (big and small), Trayle lets his computer generate random sounds or respond directly to the horns. While this technique has been used by others, including trombonist George Lewis, the unique combination of saxes and flute gives this one a special flavor. Of course, Golia's unusual technique and improvisational flair are critical to the album's success, as are the weird and wily electronic manipulations of Trayle. While there are no melodies, there are remarkable constructs created, ones that bridge the gap between classical music, jazz, and free improvisation. In fact, one of the attractive elements of the recording is the trans-genre associations. As with anything this speculative, some pieces work better than others, as the computer glorifies in sound manipulations that vary from piece to piece. If not always inspiring, the overall effect is at least compelling and sometimes thrilling -- and in an era of pop conformity, that says a lot.
Состав
Electronics – Mark Trayle
Mastered By – Wayne Peet
Reeds [Woodwinds] – Vinny Golia
Recorded at California Institute for the Arts. Mastered Feb. 2001 at Newzone Studio, Los Angeles, CA.
По всем вопросам пишите личное сообщение пользователю M0p94ok.
—
218
M0p94ok
Нет комментариев. Ваш будет первым!
Войдите или зарегистрируйтесь чтобы добавлять комментарии