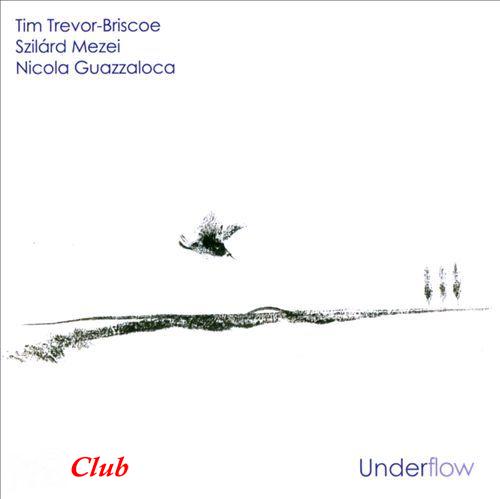 Треклист:
1. Shoe Crabbing 5:45
2. Too Far From The Yew Tree 14:27
3. Perpangelus 5:50
4. Dog Flow (Live) 10:47
5. The Groaner (Live) 12:42
6. Fairgrind (Live) 8:35
Лог создания рипа
Содержание индексной карты (.CUE)
Лог проверки качества
Доп. информация:
Album Info & AMG Review
Music by Tim Trevor-Briscoe, Nicola Guazzaloca and Szilard Mezei
Produced by Tim Trevor-Briscoe, Nicola Guazzaloca, Szilard Mezei & Leo Feigin
Recorded on April 16, 2010 at Modulab - Casalecchio di Reno (studio session), and on April 17, 2010 at Scuola Popolare di Musica Ivan Illich - Bologna (live session)
Live session recorded by Nicola Guazzaloca - SPM Ivan Illich Research and Documentation Center
Editing and mastering by Szilard Mezei
Front cover drawing by Zoltan Bicskei
Artwork by Lora Denis
Musical interplay is a lot about dynamics, the energy flows, the changing levels of intensity and the currents that make musicians interact with each other. This trio, with Tim Trevor-Briscoe on saxophone, Szilárd Mezei on viola, and Nicola Guazzaloca on piano is almost all about dynamics.
The texture of their music is to be compared with pointillism, short, patternless dots of sound that cluster together to create an imagery that only becomes clear when looked at from a distance. The only images you get to see here are internal ones.
Have you ever watched long stems of grass moving in the wind, now unmoving, then suddenly all moving in the same direction by the invisible wind? Or have you watched long seaweed flowing under water, being softly moved then suddenly all weeds wave frantically together as a wave crashes overhead? Or have you wondered about the rapid joint movements of a flight of starlings?
Nothing happens, then suddenly something happens and everything happens, at breakneck speed all unconnected things moving together, as one, then back to rest.
This is how this music is. At first listening, the approach seemed pretty abstract and distant, and not easy to get into it, but now, after at least ten hours of listening, the beauty of the incredible dynamics of this excellent trio unfolds while remaining a mystery - all three move as one, soft-spoken, vulnerable, sensitive, then moving into dense, violent outbursts full of rage and volume, only to fall back to more gentle interactions.
Like the grass, the seaweeds and the starlings, you can only watch it happen, and admire its beauty and unexpected common movements, moved by something invisible, yet that is clearly there, must be there, because otherwise how could three move as one?
Состав
Tim Trevor-Briscoe: saxophone
Szilard Mezei: viola
Nicola Guazzaloca: piano
По всем вопросам пишите личное сообщение пользователю M0p94ok.
—
144
M0p94ok
Нет комментариев. Ваш будет первым!
Войдите или зарегистрируйтесь чтобы добавлять комментарии