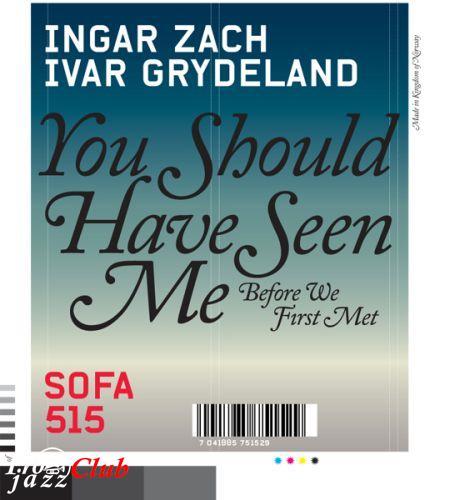 Треклист:
1. 01 In Geneva 29:52
2. 02 In Oslo 18:22
Лог создания рипа
Содержание индексной карты (.CUE)
Лог проверки качества
Доп. информация:
Album Info & AMG Review
Music by Zach & Grydeland
Produced by Zach & Grydeland
1. recorded at Cave 12, Geneva, October 27, 2003
2. recorded at State Academy of Music in Oslo, May 7, 2003 by Ivar Grydeland
Mastered by Helge Sten
Cover design: Stoffer Ganes
This production was funded in part by Fond for Lyd og Bilde
You Should Have Seen Me (Before We First Met) is our duo's second release on SOFA. Three years since we released our first CD, the music is now very different. The two pieces on this CD are recorded live in Geneva and Oslo. Somehow, these two pieces contain much of the same elements, although they were recorded over 5 months apart. We find it interesting that the musical form and expression of the two pieces are different, despite the similarity of elements.
Co-founders of the Sofa label, Ingar Zach and Ivar Grydeland here push their musical association further. You Should Have Seen Me Before We First Met is generally a stronger offering than Visiting Ants, released in 2000. Where the first album consisted of several short pieces, some of them solo features, this one presents two extended improvisations. The playfulness displayed earlier has given way to something different but no less impressive. The focus has been moved from stamina to texture. Certain stretches feature the guitarist and the percussionist playing hypnotic drones (mechanical devices are being used, probably a hand-held fan in Grydeland's case). Zach displays a lot of invention, adding a few tricks of his own to the usual cymbal bowing and scrap-metal tossing to create unusual textures sounding somewhere between vibrating surfaces and guitar. Grydeland switches between acoustic and electric guitar, prepared and unprepared. Track one, "In Geneva," is the longest and most interesting of the two. For 30 minutes, the duo locks in and doesn't let go, letting the music unfold slowly through seguing episodes of dynamic free improvisation, meditative microsonics, and gentle acoustic guitar playing. In comparison, "In Oslo" lacks a bit of cohesion. Ideas are slow to come in and are introduced somewhat clumsily (Grydeland's electric guitar halfway through, Zach's sudden switch from sustained textures to hitting). The fragmented flow of the piece should be grabbing the listener's attention, but it sounds too arbitrary to succeed. Luckily, that's not enough to lessen the appeal of the first improvisation.
Состав
Ingar Zach: percussion, sruti box
Ivar Grydeland: acoustic & electric guitars
По всем вопросам пишите личное сообщение пользователю M0p94ok.
—
157
M0p94ok
Нет комментариев. Ваш будет первым!
Войдите или зарегистрируйтесь чтобы добавлять комментарии