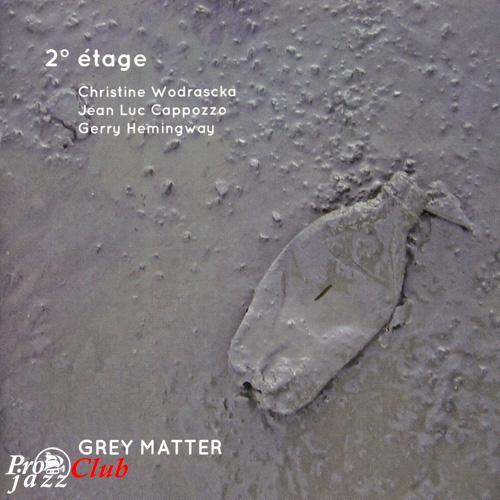 Треклист:
2° étage
Christine Wodrascka / Jean-Luc Cappozzo / Gerry Hemingway - Grey Matter
Жанр: Avant-Garde Jazz / Free Improvisation
Носитель: CD
Страна-производитель диска: Lithuania
Год издания: 2013
Издатель (лейбл): NoBusiness Records
Номер по каталогу: NBCD 63
Аудиокодек: FLAC (*.flac)
Тип рипа: tracks+.cue
Битрейт аудио: lossless
Продолжительность: 00:48:52
Источник (релизер): nnm, Джаз Клуб, 21 марта, 2014 / спасибо mishka1981
Наличие сканов в содержимом раздачи: да
Треклист:
1. Echappée belle (10:42)
2. Rivulet (07:17)
3. The sheriff arrives (04:55)
4. Grey matter (08:15)
5. Possession (03:33)
6. Up down (03:20)
7. The ghost train (05:12)
8. Tanz Ende (05:31)
All the music is improvised by Jean-Luc Cappozzo, Gerry Hemingway and Christine Wodrascka
Доп. информация:
Musicians:
Christine Wodrascka - piano
Jean-Luc Cappozzo - trumpet, bugle
Gerry Hemingway - percussion
Recorded in October 18th 2012, live in Le Carré Bleu, Poitiers, France
© 2013, NoBusiness Records
2° étage - Grey Matter nobusinessrecords.com
2° étage - Grey Matter allaboutjazz.com
Christine Wodrascka from Wikipedia, the free encyclopedia
JJean-Luc Cappozzo Official Site
Gerry Hemingway Official Site
Gerry Hemingway from Wikipedia, the free encyclopedia
... back ...
... review ...
Although the title of this album refers to a major component of the central nervous system consisting of neuronal cell bodies and therefore something which belongs to the human body, listening to it makes me think of something completely different. I imagine myself standing on a large ascending meadow, I am contemplating the little flowers, the bees, the flies and the bugs, it is a world of its own, joyous and frolic. In a musical way, this is what the beginning of “Echappée belle”, the first track, is like. Jean-Luc Cappozzo (tp) starts with a Nate-Wooley-like approach, it’s an excursion in breath and extended techniques, it sounds as if there were two trumpets. Gerry Hemingway (dr) joins him but does not deliver a pulse, the drums are another solo instrument. But then I feel that there is something wrong, there is a rumbling and mumbling, as if the earth was slightly quaking; the meadow is rising at the opposite end, there is a slow but threatening debris avalanche coming towards me, it’s shape is shifting, as if it was alive. Christine Wodrascka (p), who has been the one holding the piece together with her prepared piano, has started delivering dark, gloomy and muffled low-key chords, Cappozzo plays shrill notes which are hardly recognizable as trumpet sounds and Hemingway concentrates on his toms. I look at and listen to this wonder of nature in a puzzled way because I don’t know what will happen next.
As to structure there are similar tracks like “Ghost Train” featuring Wodrascka bowing the strings of the interior of the piano while Cappozzo has turned to regular sounds and nervous runs; or “Rivulet” which presents an alternative ending: the trumpet plays a beautiful harmonic melody here.
Other highlights are short pieces like “Possession” with its disharmonic piano chords, its coughing and its belling or “Tanz Ende” (German for: The End of the Dance), which features Wodrascka and Hemingway throwing in sparse sounds, while Cappozzo is hardly audible - it sounds as if parts of what they play are cut out (especially Wodrascka’s part) - it is a sketch, an outline, a draft. It really seems as if the album was in its final throes before all of a sudden it turns in a mad, but funny simple waltz, which is immediately alienated.
All the music is improvised by these experienced musicians and especially Christine Wodrascka, who says that she likes to look for unique and authentic moments in music and who seems to be a bit underrepresented (at least on our blog) although she has played with a lot of the best European improvisers like Joëlle Léandre, Paul Lovens or Fred VanHove, is simply outstanding. Her style meanders between Alex von Schlippenbach, new classical music, sound explorations and even Cecil Taylor (“Up Down“). She is worth a deeper dig.
Martin Schray ~ freejazzblog.org
Лог создания рипа
Содержание индексной карты (.CUE)
auCDtect Task Manager
По всем вопросам пишите личное сообщение пользователю M0p94ok.
—
139
M0p94ok
Нет комментариев. Ваш будет первым!
Войдите или зарегистрируйтесь чтобы добавлять комментарии