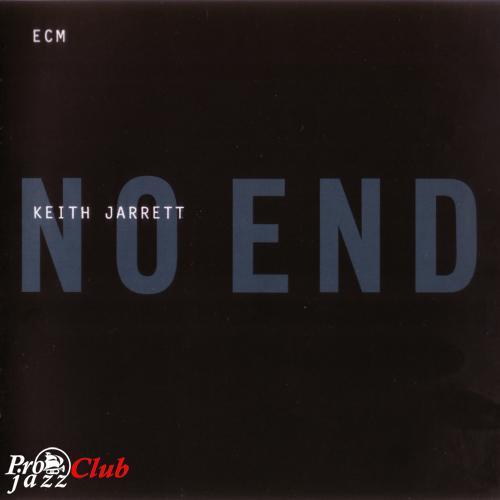 Треклист:
Keith Jarrett - No End
Жанр: Avant-Garde Jazz, Experimental, Improvisation
Носитель: CD
Страна-производитель диска: Германия
Год издания: 2013
Издатель (лейбл): ECM Records
Номер по каталогу: ECM 2361/62 (3755519)
Аудиокодек: FLAC (*.flac)
Тип рипа: tracks+.cue
Битрейт аудио: lossless
Продолжительность: 1:32:50
Источник (релизер): chriss71AT (what)
Наличие сканов в содержимом раздачи: да
Состав:
Keith Jarrett - electric guitars, Fender bass, drums, tablas, percussion, voice, recorder, piano
Music by Keith Jarrett.
Recorded at Cavelight Studio, New Jersey in 1986.
Producer's Note: Play this music LOUD, especially tracks 2 to 20, since many inner details will be lost at lower volumes.
CD1 {46:46}
01. I (7:23)
02. II (3:38)
03. III (5:40)
04. IV (5:25)
05. V (3:39)
06. VI (5:37)
07. VII (4:06)
08. VIII (3:57)
09. IX (4:48)
10. X (2:33)
Лог создания рипа
Содержание индексной карты (.CUE)
Отчет CUETools
CD2 {46:05}
01. XI (4:06)
02. XII (6:15)
03. XIII (3:49)
04. XIV (4:56)
05. XV (4:28)
06. XVI (2:46)
07. XVII (3:40)
08. XVIII (5:48)
09. XIX (7:13)
10. XX (3:04)
Лог создания рипа
Содержание индексной карты (.CUE)
Отчет CUETools
Review by Thom Jurek
It is almost always revealing -- if sometimes messy -- to hear artists of great stature messing about in their home studios, making music they never intended anyone else to hear. Keith Jarrett's No End is such an effort: a two-disc archival home recording from 1986 on which he performs all the instrumental parts. It was cut only a year after the wide-ranging, multi-instrument, acoustic exercise Spirits with its notional nod toward global music. No End is a related but different animal. Jarrett plays piano here, but his primary instruments on this set are drums, electric guitars, basses, tablas, and other percussion, with piano and recorder added. Mostly, he plays and improvises on instinctive vamps and rhythms, and overdubs between two cassette recorders -- there's a lot of hiss (very rare for ECM), but it's not distracting. No End proves that Jarrett loved rock & roll, blues, and funk as much as anything else at one time, and was a true son of the '60s and all they entailed. Not all of the world music notions from Spirits have been exorcized, but when they appear, they're usually woven inside a more "rockist" framework. This loose, groove-centric music is (mostly) interesting on two levels: one, because it's Jarrett playing it, but also because it contains its own charm. When these experiments don't work, it's more a lack of virtuoso guitar chops than ideas. He's good at the instrument, just not great. These 20 numbered pieces range in length from just under three minutes to over seven. These ideas develop according to the many faces of rhythm itself, not harmonic forethought. All the instruments are played with deep inner attention paid to them. On "II," the bass and drum attack is based on a speculative but meaty funk vamp; the guitars crawl in, speaking to one another in staggered lines and bumping into one another. The slippery drums on "III" offer a funky African groove as tablas and other percussion are layered into the backdrop with Jarrett's wordless chanted vocals as the guitars wind around a blues riff. "V" is Caribbean-flavored but its time is a basic 4/4. There is also a direct hint at jazz-funk, evidenced by "VII." The hard bass whomp on "XIII" goes head-to-head with stinging guitar lines in reply as a cowbell, tom-toms, and tablas drive it home. "XIV" contains a Spanish tinge, seemingly perceived through Ornette Coleman's late-'70s harmolodic music. No End will not appeal to everyone -- especially not all Jarrett fans. But those who've closely observed his processes and evolution will likely embrace it, as will fans of experimental guitar-based rock. His reason for releasing it now can be gleaned from his short but illuminating liner essay, but suffice to say, it makes for a welcome addition to the catalog of one of the most mercurial musicians to emerge from the last century.
Any questions -> support@pro-jazz.com. По всем вопросам пишите -> support@pro-jazz.com
—
226
M0p94ok
Нет комментариев. Ваш будет первым!
Войдите или зарегистрируйтесь чтобы добавлять комментарии