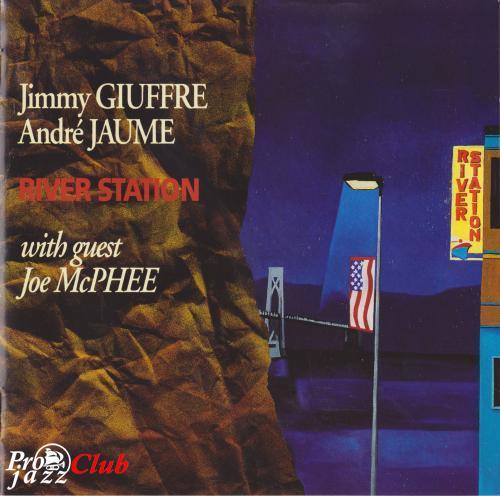 Треклист:
Jimmy Giuffre - Andre Jaume with Joe McPhee - River Station
Жанр: Avant-Garde, Free Improvisation
Страна-производитель диска: France
Год издания: 1993
Издатель (лейбл): CELP
Номер по каталогу: C26
Аудиокодек: FLAC (*.flac)
Тип рипа: tracks+.cue
Битрейт аудио: lossless
Продолжительность: 40:45
Источник (релизер): собственный рип с оригинального диска.
Наличие сканов в содержимом раздачи: да
Треклист:
01. Apes 2:09
02. Yell & Scamper 1:34
03. Variations (On A Monk Theme) 2:27
04. When Things Go Wrong 3:06
05. Jeux Libres 3:06
06. With Chimes 2:14
07. Lizards 1:25
08. Slap It! 2:22
09. Coll 3:28
10. River Station 3:54
11. Whispered Moments 2:42
12. 35 Smith Street 3:44
13. Three Way Split 7:10
Лог создания рипа
Содержание индексной карты (.CUE)
Доп. информация:
Recorded at R.B.Y. Recording and Video Studios, Southbury, Connecticut, USA on September 6, 1991
Об альбоме (сборнике)
Jimmy Giuffre has been labeled alternately a pioneer of cool, of "folk jazz," and of hopelessly abstract impressionism. While it is possible to find elements in this music that could satisfy any of these criteria, there is something unique about him that successfully avoids easy pigeon-holing. Always preferring the simple to the elaborate, he delivers up melodies that are bare naked, open-ended, and airy. Consistent with his heady constructions of the early 60s with Swallow and Bley, his paradoxical style continues to combine down-to-earth solidity with gauzed transparency.
1987's Eiffel was Andre' Jaume's first encounter with Giuffre. Previous to that time, Jaume had tended toward rather recondite experimentation. From this point on, however, Jaume's voice became more subtle, and began to make a stronger impression for its deepening maturity and confidence. River Station continues on where that album left off, delving even more deeply into autumnal, evocative mood pieces that hang in the air like a slowly turning mobile. Except for a couple of lively, rhythmic tracks, most of this recording has the two revolving around one another, never breaking contact with the unifying themes.
"Slap It" is one notable exception. As its title suggests, the technique involves the use of liberally adminstered tongue stops, traded over a bed of smoothly flowing reeds. Jaume's bass clarinet, stopping and starting on a dime, sounds lucid, rich, and full of life, despite the still relatively slow pace. The recording is close-up and personal; one can hear the satisfying click of the keys bouncing on their cork pads. "Coll" is also somewhat jaunty, but retains the same golden "end of the day" atmosphere that pervades the entire recording. Joe McPhee's valve trombone contribution to the final track is appropriately spare; he plays within their context rather than imposing his own. Giuffre elaborates with a few of his trademark upwardly rising cries, a lonely, windy voice in the distance.
The harmonies here are stunningly emotional. Certain moments are so intense they buzz, the overtones barely overlapping one another, as in the finale of "Whispered Moments," which is actually one of the more firm-handed tracks of the date. Most of River Station consists of starkly simple ideas. There are moments so precious they make you want to cry. At one point Jaume is merely blowing through his horn without invoking the reed, leaving us with the poignancy of a single, unadorned column of air flowing limpidly through space. Throughout there is an astute refinement of form, a tendency to subtract from rather than add to the body of the piece. This modesty of spirit speaks well of both players. ~ by Scot Hacker
Состав
Jimmy Giuffre - soprano saxophone, clarinet
André Jaume - tenor saxophone, bass clarinet
Joe McPhee - valve trombone on 13
Any questions -> support@pro-jazz.com. По всем вопросам пишите -> support@pro-jazz.com
—
236
M0p94ok
Нет комментариев. Ваш будет первым!
Войдите или зарегистрируйтесь чтобы добавлять комментарии