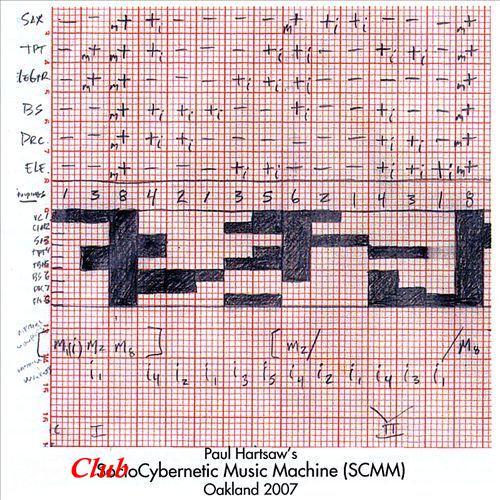 Треклист:
1. 32 Moments For Octet 51:48
Лог создания рипа
Содержание индексной карты (.CUE)
Лог проверки качества
Доп. информация:
Album Info & Review
Dedicated to Gordon Pask (1928-1996)
Liner notes: Guillermo Gregorio
Produced by Paul Hartsaw
Recorded at 1510 Oakland CA August 19, 2007
Recording engineered by Scott Looney
Cover art & design by Paul Hartsaw & Alan Anzalone
The world of "free jazz" and improvisation (or improv) and the world of avant garde classical have been converging for some time now. In opposition to the "Third Stream" concepts put forward in the late '50s by Gunther Schuller and others, the musical rapprochement does not necessarily combine the musical syntax of jazz and classical vocabularies. Rather there has developed a language of sounds and intervalic relations that both groups hold more or less in common.
By utilizing various schemas to encourage both improvisational discourse and sonic innovation, artists from both sides are creating musical works that involve all participants in the decision of what to play and when. Sometimes there is full notation and individual decisions are made on the level of timing and ordering of the music at hand. On the other end is the intuitive group improvisation, where a kind of total choice is available on the part of artists, subject, of course, ultimately to the approval or disapproval of fellow artists and audiences.
Somewhere in between is the music produced by Paul Hartsaw's Octet in a project he calls the Socio-Cybernetic Music Machine (SCMM), recorded in performance in Oakland in 2007 (Metastable Sound 012). As I understand it, Mr. Hartsaw created a performance schema where individual musicians were instructed at various times to remain silent, to play, or to "take initiative," to play in the manner of a soloist. Musicians were given written motives to sound as well as given times where they could freely improvise.
The end result is a performance lasting 51-odd-minutes, controlled in part by Paul Hartsaw's role as "signaller," a kind of combination traffic cop and conductor.
The octet consisted of seven musicians and one vocalist, and the performance that ensues I trust is only one of infinite numbers of possibilities.
And so does the music have and retain interest? Yes. It has that free-abstract improvisational sound one might expect, somewhere between Stockhausen's improvisational pieces and the AACM in their more avant mode.
It is music that takes a number of listens to accustom oneself to, as is usually the case with any sort of complicated and advanced work. There are moments of comparative repose and moments of density and energetic activity. What Hartsaw's schema does is ensure that there is sonic variety and contrast in every performance. Like more conventional jazz, the music depends heavily on the imagination and ability of the artists. Like more conventionally conceived avant modern concert music there is a more or less ordered presentation of musical events that proceed in linear fashion from point A to point B.
The CD is recommended for those who like to explore ensemble abstractions. Paul Hartsaw's structural and personal direction of the sounds ensures that there is interest and variety. Recommended listening.
Состав
Ara Anderson: trumpet
Kristian Aspelin: ele. guitar
Jerome Bryerton: percussion
Phillip Greenlief: soprano sax
Aurora Josephson: voice
Jacob Lindsay: clarinet
Scott Looney: piano, electronics
Damon Smith: bass
Paul Hartsaw: signalling, socio-musical engineer
По всем вопросам пишите личное сообщение пользователю M0p94ok.
—
150
M0p94ok
Нет комментариев. Ваш будет первым!
Войдите или зарегистрируйтесь чтобы добавлять комментарии