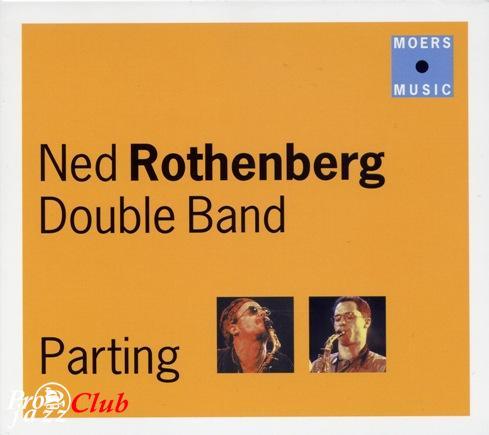 AAJ Review
In part as tribute to Chapin (who died of leukemia in 1998 at the age of 40), Rothenberg has released a final set of the Double Band and has retired the lineup from his compositional repertoire. Recorded in 1996 (making it the latest recording of the group), Parting easily measures up to the previous discs: mighty drumming from Michael Sarin and Samm Bennett, heavy bass and blasting guitar from Jerome Harris and Tony Scherr; and the juxtaposition of the saxophones—Chapin's spirited lines and Rothenberg's more angular pointillism—that were the group's mark. ~ Kurt Gottschalk, AAJ
AMG Review
Finally. Although recorded in May 1996, it took eight years for the German Moers Music label to release Parting, the third and apparently last CD by the Ned Rothenberg Double Band. Given the upbeat slammin' electric jazz-funk heard on this 2004 disc, one might assume that a CD title suggesting separation and loss was not in Rothenberg's mind when this session was originally cut. But of course, in early 1998 Rothenberg's saxophonist/flutist partner in this sextet, Thomas Chapin, died of leukemia, and the life and career of a fine musician -- not to mention a warm, friendly, open, and giving person -- were cut tragically short in the midst of an upward trajectory. And so Parting presents the dichotomy of a freewheeling blast of screaming energy infused with poignancy and melancholy; the disc is both a record of a incendiary band at its peak and a sad reminder of what the world has lost through Chapin's passing. Across the disc, one finds the Double Band as funked up and powerful as on either of the group's previous Moers releases, Overlays and Real and Imagined Time. Chapin and Rothenberg are there, of course, respectively at center-left and center-right in the mix, and also returning is the phenomenal Jerome Harris on electric guitar and electric bass. The other three musicians are Double Band newcomers, although no strangers to any follower of the '90s downtown scene: bassist Tony Scherr and drummers Michael Sarin and Samm Bennett. Together they all form a tight and propulsive unit, the two reedmen locking in with the double-barreled rhythm section to blast out Rothenberg's riffs and melodies in unison, counterpoint, and harmony, then breaking out into fiery solo statements and locking back up again, mirror images in the band's architecture but always maintaining a strong sense of personal identity.
And it must be said that, for all of Chapin's explosive and beautiful contributions, this was composer/bandleader Rothenberg's ensemble. The leader's apex on this disc comes during "Crosscut and Rip," when the entire band's skewed energy is seemingly channeled into Rothenberg's stunning solo circular-breathing technique; the unfolding variations of the altoist's multi-layered ostinatos sound like at least three separate saxophonists playing simultaneously. Still, Rothenberg gave all his bandmembers the opportunity to shine, and their highlights here are many -- Harris' burning electric guitar solo as the band segues from free-form to funk-rocking rhythms during "End Over End"; Chapin ripping flurries of notes from his alto as the band swings to the breaking point in "Snowball"; the flailing tandem drum break later in the same track (by the way, hearing Chapin with Sarin on the skins will always be a treat); Scherr's fuzz bass on "Chemical Peel," recalling Hugh Hopper and the Canterbury scene as easily as downtown N.Y.C. But Parting is not all fire from start to finish; the understated "Last Dance" floats more than it punches and jabs, with some particularly lovely soprano from Chapin. This piece would be poignant even if Chapin were still here among us. In a sense he is, most certainly in the mind and heart of Rothenberg, as the leader's liner notes and CD dedication to his departed partner and friend make clear. Then there is the foldout package's center photo, with Rothenberg's head bowed over his soprano and Chapin, head slightly tilted and completely immersed in his flute, closely behind the saxman's left shoulder. More than words, this photo reveals that the spirit of Thomas Chapin will be right there with Ned Rothenberg on many nights to come. ~ Dave Lynch, All Music Guide
EAC Report
Exact Audio Copy V0.99 prebeta 5 from 4. May 2009
EAC extraction logfile from 14. December 2009, 21:39
Ned Rothenberg Double Band / Parting
Used drive : TSSTcorpCD/DVDW SH-S182M Adapter: 1 ID: 0
Read mode : Secure
Utilize accurate stream : Yes
Defeat audio cache : Yes
Make use of C2 pointers : No
Read offset correction : 6
Overread into Lead-In and Lead-Out : No
Fill up missing offset samples with silence : Yes
Delete leading and trailing silent blocks : No
Null samples used in CRC calculations : Yes
Used interface : Installed external ASPI interface
Used output format : User Defined Encoder
Selected bitrate : 1024 kBit/s
Quality : High
Add ID3 tag : No
Command line compressor : C:\Program Files (x86)\Exact Audio Copy\Flac\flac.exe
Additional command line options : -8 -V -T "ARTIST=%a" -T "TITLE=%t" -T "ALBUM=%g" -T "DATE=%y" -T "TRACKNUMBER=%n" -T "GENRE=%m" -T "COMMENT=EAC FLAC -8" %s
TOC of the extracted CD
Track | Start | Length | Start sector | End sector
---------------------------------------------------------
1 | 0:00.00 | 8:19.40 | 0 | 37464
2 | 8:19.40 | 6:44.21 | 37465 | 67785
3 | 15:03.61 | 9:10.24 | 67786 | 109059
4 | 24:14.10 | 7:59.21 | 109060 | 145005
5 | 32:13.31 | 10:27.29 | 145006 | 192059
6 | 42:40.60 | 7:47.41 | 192060 | 227125
7 | 50:28.26 | 4:55.16 | 227126 | 249266
8 | 55:23.42 | 3:28.39 | 249267 | 264905
Range status and errors
Selected range
Filename C:\home\eac\Ned Rothenberg Double Band - Parting.wav
Peak level 100.0 %
Range quality 100.0 %
Test CRC 0BF0FCE7
Copy CRC 0BF0FCE7
Copy OK
No errors occurred
AccurateRip summary
Track 1 not present in database
Track 2 not present in database
Track 3 not present in database
Track 4 not present in database
Track 5 not present in database
Track 6 not present in database
Track 7 not present in database
Track 8 not present in database
None of the tracks are present in the AccurateRip database
End of status report
По всем вопросам пишите личное сообщение пользователю M0p94ok.
—
142
M0p94ok
Нет комментариев. Ваш будет первым!
Войдите или зарегистрируйтесь чтобы добавлять комментарии