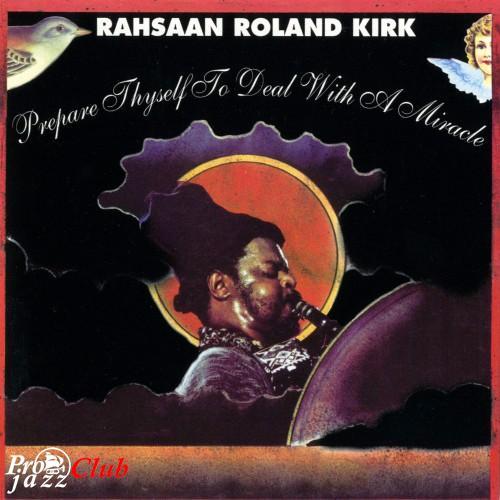 AllMusic Review by Thom Jurek
Recorded in 1973, this is yet another criminally underappreciated Rahsaan Roland Kirk recording from the last phase of a remarkable career. This is perhaps Kirk's most experimental recording in that it involves his most involved performing on multiple horns and flutes – including his infamous and wonderful nose flute – and working with drones on a more surface level. Given Kirk's system of playing three horns at once, the drone horn was always a part of his sonic architecture. The difference here is that the melodic and improvisational lines take a back seat on tunes such as the opening "Salvation and Reminiscing," where he makes fantastic use of a baby E-flat saxophone, and on "Celestial Bliss," on which he is accompanied on his "black mystery pipes" only by percussion. On the medley "Seasons: One Mind Winter/Summer/Ninth Ghost," Kirk begins with the nose flutes, playing a part of "Balm in Gilead," before bringing in a six-piece string orchestra to play behind him as he improvises on all the melodies and modes. And this improvisation is not just a series of out arpeggios playing legato and running through and over the changes, but intricately nuanced, gentle, and architecturally sophisticated wanderings. Despite the beauty of the album's first three tracks, it is on the closer, the 21-and-a-half-minute "Saxophone Concerto," where Kirk most leaves his mark as a composer and innovator on the jazz world. Kirk comes out blowing literally like a train and weaves in, with vocalists Jeanne Lee and Dee Dee Bridgewater, a series of muted horn lines and rhythm figures. The band is 16 pieces total, and the concerto is structured in movements from an intro in which the purpose is stated: "time for America to discover some of its true Black miracles," wherein bebop and hard bop shimmy up against free modes and articulations by the rhythm section and the other horns. Kirk may solo on top with his tenor, but he holds close to the rhythm section's articulation of mutated blues. From here, Latin and faux classical chromatics are shaded into the whole as the pace becomes more and more frenetic, and just as the piece becomes perhaps circus-like, Kirk and company strip it all back and out, into a free universe washed by improvising vocalists, crashing cymbals, droning brass, and rumbling tom-toms before it's all a hush of unidentifiable sounds except for those of breaking glass. There are numerous metaphors and metonyms here, but they will not come to the listener until later, when she or he regains the conscious notion of breathing.
Контейнер: FLAC (*.flac)
Тип рипа: tracks
Разрядность: 24/192
Формат: PCM
Количество каналов: 2.0
Лог проверки качества
Источник: hdtracks.com