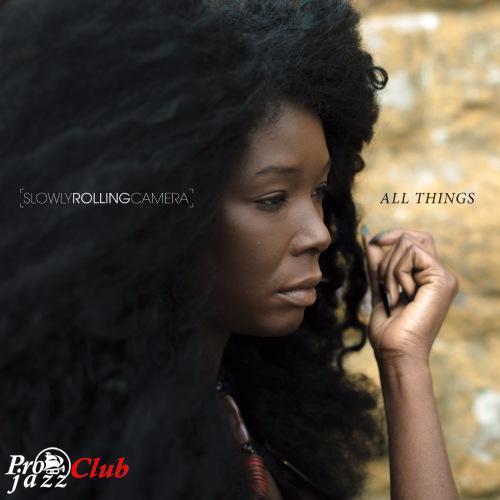 Треклист:
[SLOWLYROLLINGCAMERA] ' ' ' ' ' ' ' ' ' ' ' ALL THINGS'
Жанр: Nu Jazz, Neo-Soul, Female Vocal
Год издания: 2016
Издатель (лейбл): Edition Records
Номер по каталогу: EDN1080
Страна исполнителя (группы): UK
Аудиокодек: FLAC (*.flac)
Тип рипа: tracks
Битрейт аудио: lossless
Продолжительность: 45:10
Источник (релизер): [WEB]
Наличие сканов: front
Треклист:
1. The Fix
2. Delusive
3. Oblivion
4. Room With A View
5. Scintillation
6. High Praise
7. Unsetting Sun
8. The Brink
9. All Things
Лог проверки качества
Об альбоме
Slowly Rolling Camera was formed in Cardiff, Wales in 2013 and comprises a nucleus of vocalist and lyricist Dionne Bennett, co-composer and keyboardist Dave Stapleton plus Deri Roberts who in addition to producing the album is heard on electronics and assorted instruments and finally Elliot Bennett on drums and percussion. The group is variously augmented by horns, guitar, bass and strings where required. This is the second album by the band, the first eponymous album was released in 2014, preceded by a 7" single "Protagonist" in 2013 and was followed by an EP Into The Shadow (2015).
If there is such a thing as "Power Jazz" then Slowly Rolling Camera is surely the living embodiment of this niche genre. Dionne Bennett has a distinctly forceful, emotionally-charged voiced, the opener "The Fix" offering a melodramatic and instantaneous example of her talent. The resonance and power of Bennett's voice is actually not a million miles from Tina Turner or the late Loleatta Holloway, but powerful it most certainly is.
There are elements within songs like "Oblivion" which in their arrangements and dynamics are redolent of bands such as Massive Attack and even Cocteau Twins. The overarching chord-rich vamp of "Scintillation" belies its underlying complexity, building-up to a near-liturgical chant. By contrast the undercurrent of Moogy bass drone on "High Praise" is juxtaposed by Bennett's strident vocals.
However, it's not all electrifying dynamism as ballads like "Unsetting Sun" prove, Bennett's luxuriant voice accompanied here by Dave Stapleton on piano plus strings. On "The Brink" there's double complexity to be found in the shape of its memorable hook and Bennett's overlaid multi-tracked vocals.
The combination of Dee Dee Bridgewater's eerily disembodied, sampled voice repeatedly enunciating the group's name with Bennett's soulful, poignant vocals on the short title track send shivers down the spine.
Slowly Rolling Camera has been in existence for barely four years but by the evidence of this super-confident, highly engaging album you'd think they'd been around forever. (Roger Farbey, allaboutjazz.com)
Состав