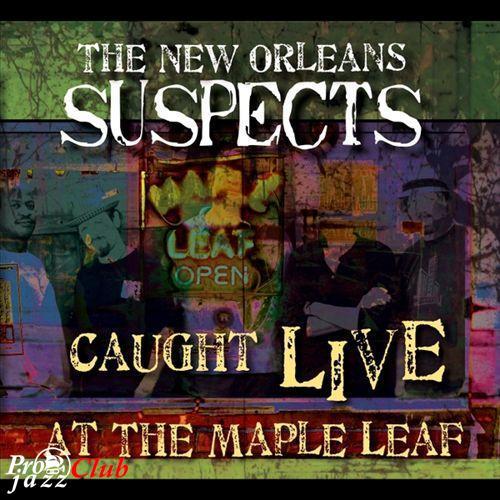 Треклист:
The New Orleans Suspects / Caught Live At The Maple Leaf
Жанр: New Orleans Funk, Jam Band
Носитель: CD
Год издания: 2012
Издатель (лейбл): New Orleans Suspects Self-released
Аудиокодек: FLAC (*.flac)
Тип рипа: tracks+.cue
Битрейт аудио: lossless
Продолжительность: 01:17:29
Источник (релизер): swm99
Наличие сканов в содержимом раздачи: нет
Треклист:
1. County Side Of Life (Maurice R. Hirsch) 8:10
2. Classified (James Booker) 4:55
3. Tipitina (Henry Roeland Byrd) 7:42
4. Look Ka Py Py (The Meters) 8:54
5. Big Chief (Earl King) 12:06
6. All The Money (Bobby Charles) 5:09
7. Swampthang (New Orleans Supects) 6:58
8. Willie's Second Line (New Orleans Supects) 6:33
9. Glad (Steve Winwood) 7:31
10. Blackbird Special (Dirty Dozen Brass Band) 9:16
Лог создания рипа
Содержание индексной карты (.CUE)
Об исполнителе (группе)
neworleanssuspects.com
It’s been said that the musicians of New Orleans are all members of one gigantic band that breaks up into smaller groups on a nightly basis. If this were really the case, The New Orleans Suspects would be in a class all their own. The group is comprised of musicians with experience and versatility that rival any other band the city has ever produced.
“Mean” Willie Green has been the drummer for the Neville Brothers band since the 1980s. His unique attack has defined funk drumming for a quarter of a century, yet he is not a one-dimensional player. His taste in music spans the gamut of modern rock styles and he is as comfortable driving the beat as he is holding down the groove.
Reggie Scanlan‘s career has been defined by his thirty-three years playing bass in The Radiators – the longest running rock act in the history of New Orleans – but his resume is far deeper. Scanlan spent much of the 1970’s in the bands of legends such as James Booker and Professor Longhair.
Jake Eckert was the lead guitarist in the Dirty Dozen Brass Band. While living in Los Angeles he played in the band New Soul Underground along with jazz great Larry Carlton. He has performed with some of the biggest names in the business, including Warren Haynes, Dr. John, Allen Toussaint, and Dave Matthews.
CR Gruver is a classically trained pianist who immersed himself in New Orleans piano style after touring with nationally known bands such as The Meters Experience, Outformation, and singer/songwriter Angie Aparo. Since moving to New Orleans he has become a well-regarded sideman adept at James Booker-style piano and the swelling B-3 stylings of Art Neville.
Jeff Watkins is an accomplished sax player, engineer and producer. He played all over the world leading James Brown’s band for 12 years, including the induction into the Rock’n’Roll Hall of Fame. After Brown’s passing, he worked for six years with Joss Stone as her producer, engineer and band-leader before joining The Suspects full-time.
Together, these five musicians are The New Orleans Suspects. Known for their high-energy live shows, they create music that is firmly rooted in the modern New Orleans sound with compelling originals and tasteful covers. They released two albums in 2012 – their eponymous debut studio album, and “Live at the Maple Leaf”, making it into iTunes highly competitive “New and Noteworthy” page. The band is continually touring while working on a second studio album to be released in 2013.
We'll be featuring the New Orleans Suspects CD 'Caught Live at The Maple Leaf'.
Об альбоме (сборнике)
Sometimes it helps to cut right to the chase: The New Orleans Suspects are above all a live band, so they didn’t wait long (less than a year after their studio debut) to make a live album. One glance at the band personnel (with familiar names from the Nevilles, the Radiators and Dirty Dozen) and the tracklist (time-honored tunes from Professor Longhair, the Meters, Earl King and James Booker, most in versions that approach ten minutes) will tell you exactly what you’re in for: a classic-model New Orleans jam album. And that ain’t a bad thing at all.
Breathing new life into “Tipitina” and “Big Chief” is a tall order at this point, but the band is still new enough that the chemistry sounds fresh—and the players are good enough that the extended solos feel like a plus. Keyboardist CR Gruver and guitarist Jake Eckert get their turn to shine on the former tune; saxman Jeff Watkins and drummer Mean Willie Green step out on the latter. True to his form in the Radiators, bassist Reggie Scanlan barely steps out at all, but you’d miss his economically fluid parts if they weren’t there.
The more creative choices work best. “Country Side of Life” isn’t the local-classic Robert Parker tune, but a joyful bit of ’70s Southern rock done by Wet Willie. Bobby Charles’ “All the Money” was a highlight of the Suspects’ studio debut and it works again here, though curiously, the original line “He got all the reefer” is now replaced by “…all the answers”—Talk about losing some easy applause. And they do their best arranging on the old Traffic instrumental “”Glad,” funkifying the upbeat first half and turning the spacey second half into a rhumba. It’s not totally faithful to Traffic’s version, but it’s true to the mood of the title. by: Brett Milano
Состав
"Mean” Willie Green - drums
Reggie Scanlan - bass
Jake Eckert - guitar
CR Gruver - keyboard, vocalist
Jeff Watkins - saxophone
Guest Musician - Kevin Harris - sax, vocals