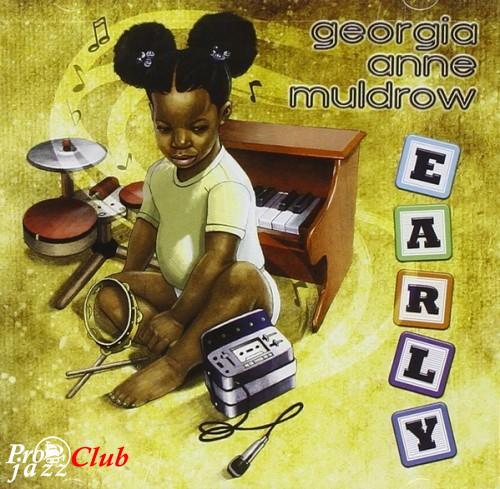 Треклист:
Georgia Anne Muldrow / Early
Жанр: Neo Soul,Soul-Jazz,Funk
Носитель: CD
Страна-производитель диска (релиза): US
Год издания: 2009
Издатель (лейбл): Animatedcartunes
Номер по каталогу: act001
Страна исполнителя (группы): US
Аудиокодек: FLAC (*.flac)
Тип рипа: image+.cue
Битрейт аудио: lossless
Продолжительность: 00:41:36
Источник (релизер): собственный рип
Наличие сканов в содержимом раздачи: нет
Треклист:
1 Child Of The Sun
2 Never A Day In Vain
3 Run Away
4 Break You Down
5 Sunset
6 Keep It Real?
7 Alone With An Angel
8 In Love Again
9 Let It Go
10 Gears (Sing It Again)
Лог создания рипа
Об исполнителе (группе)
Georgia Anne Muldrow (born 1983) is an American musician from Los Angeles, California. AllMusic described her as "one of the most daring and important (albeit underappreciated) artists of her time". In 2008, she co-founded the SomeOthaShip Connect record label with her partner Dudley Perkins.In 2006, Georgia Anne Muldrow released the debut EP, Worthnothings, on Stones Throw Records. Her first album, Olesi: Fragments of an Earth, was released on the label in that year.
She released Seeds, an album entirely produced by Madlib, on SomeOthaShip Connect in 2012.Rapper Mos Def said about Muldrow: "She’s incredible. She’s like Flack, Nina Simone, Ella, she’s something else. She’s like religion. It’s heavy, vibrational music. I’ve never heard a human being sing like this. Her voice is wildly, finely expressive. It’s so singular. It’s hip-hop, the way that she approaches it rhythmically, she’s got so many jazz influences. It’s something else and you can just feel it. With “Georgia Anne Muldrow Presents Ms. One” (Someothaship) she’s like J. Dilla, the legendary producer. She makes her own beats, she rhymes, she sings, and she plays. If people love Amy Winehouse, they’re going to get their minds blown when they hear Georgia Anne Muldrow."
Об альбоме (сборнике)
When listening to this album, remember that it was recorded seven years previously when Muldrow was just 17 years old. When that seeps in, the contents of this album are astounding. No, this isn't the astral-traveling, intense and exploratory, far-reaching Muldrow of Olesi, Sagala, and Umsindo. The title is a telling one -- this is "early" Muldrow as a teen, at the dawn of the new millennium, spinning her own version of the new-soul music that was in vogue back then. Songs like "Never a Day in Vain" and "Run Away" are the answer to the question "What if, before Georgia loaded up her spaceship with all her instruments and equipment to blast off to another galaxy, she made a Dwele album?" Since Muldrow is one of the most daring and important (albeit underappreciated) artists of her time, this revealing look into her "early" work is essential. Tunes such as "Break You Down" show the artist developing her unique, patented, singular groove. It's an album that reveals her vocal influences, whether overt (Betty Carter on "Sunset") or subtle (Erykah Badu on "Keep It Real?"). And then there are tracks like "In Love Again" -- one of those classic Georgia performances, one without a single vocal repeat and too many bridges to count -- that sound like she locked herself in a closet for months with Chaka Khan on loop, only to emerge with her own voice and technique in full bloom on "Let It Go." It's fitting that "Let It Go" appears near the end of the album, right before "Gears (Sing It Again)," which is like a harbinger of things to come. For an artist who wasn't even a legal adult to write, sing, play, and produce virtually every sound on this album is astonishing on so many levels. But then again, this is Georgia we're talking about.