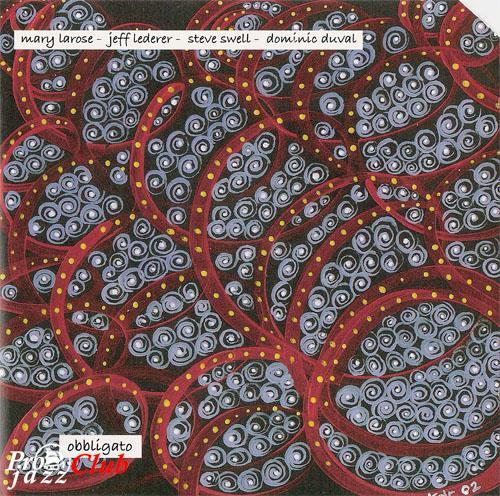 Треклист:
Mary LaRose, Jeff Lederer, Steve Swell, Dominic Duval - Obbligato
Жанр: Modern Creative, CIMP
Страна-производитель диска: USA
Год издания диска: 2002
Издатель (лейбл): CIMP
Номер по каталогу: CIMP #256
Аудиокодек: FLAC (*.flac)
Тип рипа: tracks+.cue
Битрейт аудио: lossless
Продолжительность: 1:10:05
Источник (релизер): собственный
Наличие сканов в содержимом раздачи: да
1 Reincarnation Of A Lovebird
2 Same Girl
3 Sometimes I'm Happy
4 Straight Up And Down
5 What Reason Could I Give?
6 Farmer's Market
7 Hyperballad
8 I'm Beginning To See The Light
9 Snowfall
10 The Wind Cries Mary
11 The Very Thought Of You
12 Sadness (for Kim)
13 Love Cry
Лог создания рипа
Содержание индексной карты (.CUE)
Об альбоме (сборнике)
When Mary LaRose (Brooklyn, NY) issued her first recording (Cutting the Chord, Ledhead Records) in 1995, I was very impressed by her integration of the vocal into the ensemble and by the challenging adaptation of lyrics to some of the classic and established Jazz (instrumental) repertoire. I was impressed to the extent that I placed it on my list of best-of-1996 in the Cadence Jazz Magazine annual listing. Sometime around 1999, Dominic Duval (1944, NYC, NY) (on one of his quests to find a singer to work out some musical ideas with) sent me a demo of himself and Mary in duo. Again I was impressed, but felt that they at times would benefit from another voice to play off of. “Someone like Steve Swell (1954, Newark, NJ),” I suggested.
Two things are interesting about this: (1) In suggesting “someone like Steve Swell,” I had forgotten Mary had used Steve on her previous recordings. (2) In speaking with Mary at one point, I mentioned how impressed I had been with her first recording. She then informed me that she had, in fact, offered the session to me for Cadence Jazz Records and that I had declined. It happens.
Rounding out (an understatement, as you can hear) the group is Jeff Lederer (1962, Santa Monica, CA), Mary’s husband and musical director. So now we had the band (Mary, Steve, Jeff and Dominic); the music (on paper); the setting, and my hope for an inspired interplay between musicians.
It is the quality of the 4 voices and their interplay that is critical to this music. Because they are all solo voices (as opposed to strictly accompaniment or support), often of equal value, it made it a challenge to get it right in the direct to disc set-up. For some tunes, it took just one take (Same Girl, Snowfall, The Very Thought of You, What Reason Could I Give, Sometimes I’m Happy, Love Cry, The Wind Cries Mary), while on others, with multiple takes, it was made clear why so many producers and engineers default to fabricating a whole out of edited parts. This came to mind particularly on Reincarnation of a Love Bird, which had multiple takes, all with some great parts lost to various flaws in the whole. Issued here is take 3; this tune was also the opener for the session.
The first evening’s session lasted about 4 hours and when we finally broke for sleep I really wasn’t sure what we had as I had been atypically caught up in, and distracted by, the visual aspects and mechanics of the group. Mary has a tendency to sculpt the air with her arms and hands as she sings and it’s quite a visual complement to the designs of her singing. The group as a whole – in discussing the strategies and technical aspects of each piece – was very articulate and precise. While the solos from the quartet throughout are also very articulate, the precision of the charts and their execution allow for the flux necessary to improvised music and encourage the improvisation and interpretive flow and exposition of the 4 individual voices. There are repeated flights of fancy here that quite surprised me in their juxtaposition to the set forms. Throughout the night I logged in completed takes that I found no reason to reject, but, paralleling the music, the pull on my other senses made it so that I did not have a really clear (critical) focus on the music.
The next morning, without the other competing stimuli, I was able to give the previous night’s music a dedicated listen and fully deal with the demands of this very original material. I was astounded. It was as intriguing and powerful as I had hoped: every turn loaded with surprise, filling me with thoughtful suspension. It is the joy of discovery and an emotive and artistic triumph of this music that references both the classic and the avant but avoids the mimicking or the pretensions that those worlds can encourage. For me, these four unleash the joys of inventive discovery. Attention paid was well rewarded.
We were back at work by 11 a.m., and I was a happy participant inspired by the success of the previous night’s work and ready to embrace new excursions. Expectations were immediately met with a bracing interpretation of Ellington’s Beginning to See the Light. This interpretation is one of the few versions of this song that makes me forget Jonathan & Darlene Edwards’ fractured and lumbering (but memorable) playing of the piece. Following that came The Wind Cries Mary, for me a brilliant adaptation, giving an insight and appreciation for material that previously held little interest for me.
As the morning moved into afternoon the realization of the fullness of this music became more and more obvious and the interpretive abilities of Mary LaRose more and more impressive. Few singers dare to reach out to bring non-idiomatic material into the vernacular of Jazz/improvised music and even fewer have approached the success with the consistency she does. Revelatory music.
Robert D. Rusch - August 22, 2001
Состав
Mary LaRose - vocals
Jeff Lederer - reeds
Steve Swell - trombone
Dominic Duval - bass
Any questions -> support@pro-jazz.com. По всем вопросам пишите -> support@pro-jazz.com
—
149
M0p94ok
Нет комментариев. Ваш будет первым!
Войдите или зарегистрируйтесь чтобы добавлять комментарии