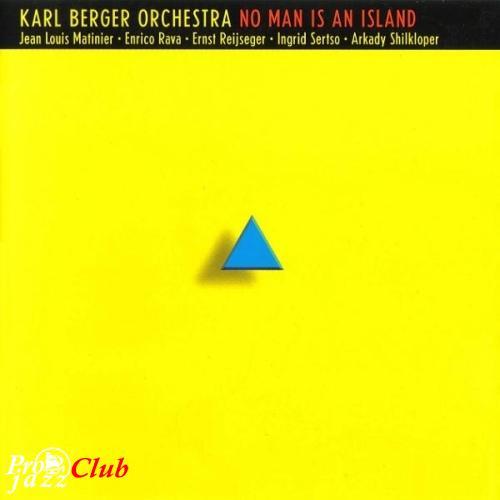 Треклист:
Karl Berger Orchestra - No Man Is An Island
Jean-Louis Matinier - Enrico Rava - Ernst Reijseger - Ingrid Sertso - Arkady Shilkloper
Жанр: Modern Big Band, Free Improvisation, Avant-garde, Post-Bop, Vibraphone / Marimba Jazz
Страна-производитель диска: USA
Год издания диска: 1996
Издатель (лейбл): Douglas Music (A Division of Gravity Limited)
Номер по каталогу: ADC4
Аудио кодек: APE (*.ape)
Тип рипа: image+.cue
Битрейт аудио: lossless
Продолжительность: 00:45:28
Источник (релизер): barin99
Наличие сканов в содержимом раздачи: да
Треклист:
1. Movement 1 (4:55)
2. Movement 2 (6:27)
3. Movement 3 (4:47)
4. Movement 4 (3:24)
5. Movement 5 (4:20)
6. Movement 6 (6:29)
7. Movement 7 (2:30)
8. Movement 8 (6:03)
9. Movement 9 (6:27)
Recorded and performed at the Donaueschingen Festival by German Radio / TV Network SWF.
Personnel:
Jean-Louis Matinier — Accordion
Enrico Rava — Trumpet
Ernst Reijseger — Cello
Ingrid Sertso — Voice
Arkady Shilkloper — French Horn
Karl Berger — Piano, Vibraphone, Vibe Master
Bernd Konrad — Clarinet, Saxophone
Johannes Blumenruother — Strings
Barbara Kummer — Strings
Kerstin Hulleman — Strings
Marc Abrams — Bass
Bill Elgart — Percussion, Drums
Лог создания рипа (EAC Log)
Содержание индексной карты (.CUE)
AMG
"Pianist and vibraphone player Karl Berger cites Ornette Coleman as a close friend and mentor; Coleman's ways of playing jazz are certainly reflected in Berger's concept, more so than any other vibist one could name. Berger eschews four-mallet technique; his style is all single-line, with little (if any) chordal playing. Berger's compositions are brief, song-like free-bop heads in the manner of Ornette, with free/modal solo sections sandwiched in between the theme statements. At his best, Berger's improvisations have much in common with his tunes; they are strongly and logically rhythmic, played over a swinging pulse, and mostly tied to tonal centers. Like Coleman, Berger is not as radical in the hearing as one might expect; both their musics are based on the core elements of swing and coherent melody.
Berger began playing piano in his native Germany at the age of ten. As a young adult, he landed a gig as house pianist for jam sessions at Club 54 in Heidelberg. There he accompanied such visiting American players as Leo Wright, Lex Humphries, and Don Ellis — learning, in the process, the complexities of modern jazz. Eventually, he took up vibes and in the early '60s developed an interest in free jazz. Berger earned a Ph.D. in musicology in 1963; two years later, he joined Don Cherry's Paris-based quintet. The group traveled to New York in 1966 to record Symphony for Improvisers on Blue Note. Berger stayed in the U.S. and recorded his first album under his own name for ESP later that year. From 1967-71, Berger played educational demonstrations in public schools with the pianist Horace Arnold's group, and led his own ensembles. In 1972, he and Coleman formed the Creative Music Studio in Woodstock, NY (www.CreativeMusicStudio.org). The school was geared toward encouraging young students to explore their own creative ideas, rather than imposing traditional jazz concepts upon them. Teachers at the school at various times included Jack DeJohnette, Sam Rivers, and Anthony Braxton, among many other prominent musicians. In the summer of 1982, Berger led a 28-piece big band at a "Jazz and World Music" concert as part of that year's Kool Jazz Festival in New York. Berger cut back on his teaching, shutting down the Creative Music School in the mid-'80s. Consequently, he became more active as a player, embarking on a world tour in 1985-6, during which he served as a guest conductor and composer for the West German Radio Orchestra in Cologne. Berger also participated in percussion festivals in New Delhi and Bombay, and served as a pianist in a duo with the African percussionist Baba Olatunji. Berger has not recorded prolifically, though he has worked as a sideman on sessions with guitarist John McLaughlin, saxophonist Lee Konitz, and bassist Alan Silva. He also played on Carla Bley's late-'60s recording of "Escalator Over the Hill." Of Berger's later recordings as leader, 1987's Transit (with Ed Blackwell and Dave Holland), and 1990's Around — both on Black Saint — are well worth seeking out. During the '90s, Berger led several more dates for a variety of labels. He has his own website at KarlBerger.com."
The Sixth Movement
From the Back cover:
"The Sixth Movement is an Interlude, spontaneeouuusly created in memory of Don Cherry: three hours before the performance in Donaueschingen we learned that he had passed away. He was our dear brother for many years of musical and personal communication. Ingrid chose the words by Khalil Gibran for this dedication."
Douglas Music (info)
Douglas Music
Profile:
US label founded by producer Alan Douglas in the 90s.
... Великолепный альбом! ...