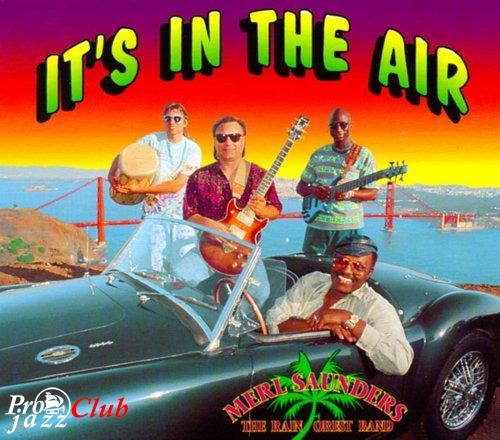 Треклист:
Merl Saunders & The Rainforest Band - It's in the Air
Жанр: Jazz-Rock, Funk, Soul
Носитель: CD
Страна-производитель диска (релиза): США
Год издания: 1993
Издатель (лейбл): Sumertone
Номер по каталогу: 7 29137 21632
Аудиокодек: FLAC (*.flac)
Тип рипа: tracks+.cue
Битрейт аудио: lossless
Продолжительность: 74:20
Источник (релизер): jb1013
Наличие сканов в содержимом раздачи: частично
Треклист:
01. Lovely Night for Dancing (5:15)
02. Play the Paris Blues (Duet with Dr. John) (6:15)
03. Sister Sadie (5:16)
04. Run River Run (5:29)
05. It's in the Air (Konfusion) (6:17)
06. Calypso Blues (4:12)
07. Built for Comfort (4:01)
08. Lay-Back Baby (6:07)
09. San Francisco After Dark (5:23)
10. Left Out in the Cold (5:54)
11. Resurrection Rag (7:37)
12. Mourning Moon (12:34)
Лог создания рипа
Содержание индексной карты (.CUE)
Отчет CUETools
AllMusic Review by Joe Viglione
Smooth playing that is so perfect. Merl Saunders & the Rain Forest Band have crafted an album that you can play anywhere and anytime for any mood. There is no dazzling guitar, no over the top vocal histrionics, just pure musicianship that is topnotch and welded into a solid groove. The songs on It's in the Air average about five minutes each in length, except for "Resurrection Rag," which is seven plus, and the 12th and final track, "Mourning Moon," which was written by guitarist Michael Hinton and clocks in at a dozen minutes. The Jon Selvin liner notes written in January of 1993 give real and important insight into this music, revolving around "Jessica," the 30-year-old Hammond B-3 organ owned and played by Saunders. Whether covering what the liners call an "obscure" Bill Withers tune, or adding the immense Dr. John to "Play the Paris Blues" (the eternal Mac Rebennack on lead vocals and Yamaha acoustic piano), the album has a sweet consistency and solid dynamic, expressed so perfectly in "Resurrection Rag." Play the CD into the ground and it keeps breathing new life into the material -- something new is revealed with each spin. It's in the Air is a remarkable record that is hard to get a handle on, and maybe that's part of its secret and its magic -- that, after years of performing, these musicians have been able to slip something in between the grooves that makes the listener keep going back. It's actually more dense and complex than the simple sounds you hear on the surface. Maybe there's some voodoo coming out of the rain forest, because this one-hour-and-14-plus minute record is simply a tremendous work of art.