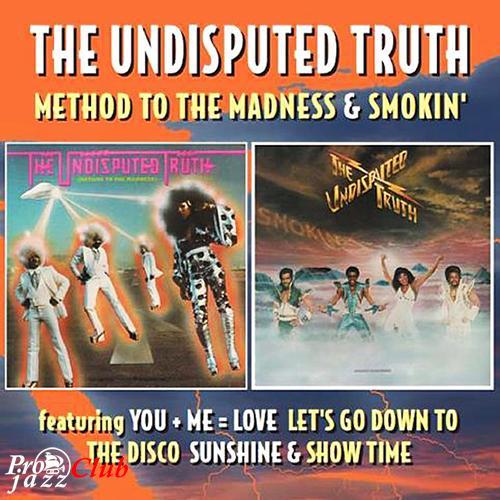 Лог создания рипа
Содержание индексной карты (.CUE)
Об альбоме (сборнике)
Two gems from The Undisputed Truth – back to back in a single package. First up is Method To The Madness – a killer classic from the second chapter of the Undisputed Truth – that time when the group stepped away from their Motown home, and followed producer/creator Norman Whitfield to his own label in California. The shift of record companies also marks a cool shift in styles too – an approach that still has all the bold, bassy elements you'd know from the earlier hits – but one that also has some fuller, more cosmic elements too – which are hinted at by the image on the cover. The set begins with a weird electronic spoken number that's almost experimental – then brings up the bass for a bit of heavy funk, while also using electric elements in a way that really points the way to sounds that other big funk groups would cop at the start of the 80s – but which really sound fresh here in the hands of Undisputed Truth. Titles include "Sunshine", "Take A Vacation From Life (And Visit Your Dreams)", "Life Ain't So Easy", "You + Me = Love", "Cosmic Contact", "Hole In The Wall", and "Let's Go Down To The Disco". Smokin has The Undisputed Truth still going very strong at the end of the 70s – working with original producer Norman Whitfield, in a groove that's every bit as wonderful as their early years. There's a killer mix of funk and deeper soul here that few other acts could handle this well – a way of hitting the flashy funk of Sly & The Family Stone or Graham Central Station – but also not falling into any showbiz traps, either – in a mode that really his the group not only respecting the role of each member, but also working together in a very cohesive way on the album. The result is a great little set that balances funky grooves with some excellent cosmic soul cuts – supported by great session work from giants like Wah Wah Watson, Walt Downing, and Jack Ashford. A few cool keyboard lines further cement the sound of the record – and titles include "Show Time", "Space Machine", "I Can't Get Enough Of Your Love", "Misunderstood", "Sandman", "Atomic Funk", and "Talkin To The Wind".
~Review by Dusty Groove, Inc.