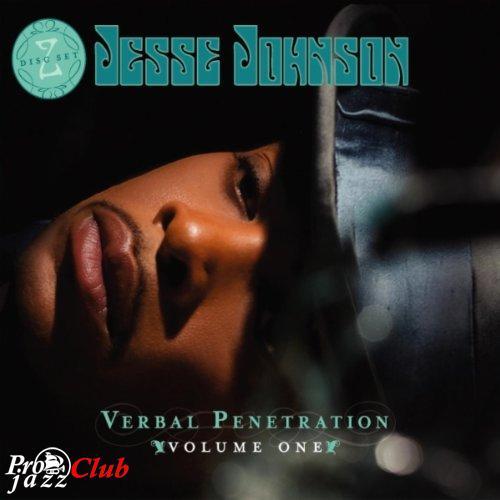 Треклист:
Jesse Johnson / Verbal Penetration
Жанр: Funk, Soul
Носитель: CD
Страна-производитель диска (релиза): USA
Год издания: 2009
Издатель (лейбл): Elite Artist Services, MRI Associated Labels
Номер по каталогу: EL04
Аудиокодек: FLAC (*.flac)
Тип рипа: tracks+.cue
Битрейт аудио: lossless
Продолжительность: 1:50:59
Источник (релизер): DP
Наличие сканов в содержимом раздачи: нет
Vol One
01. V.P. Introduction 0:22
02. Verbal Penetration 4:35
03. Propaganda 5:22
04. U & I R We R Us 4:20
05. 100 Watts Of Funky 4:59
06. Merciful 4:43
07. Don't Throw Yourself Away 4:50
08. Slo Burnin 4:02
09. Sheila Rae 4:24
10. Love Letters 4:42
11. Dream Interlude 0:21
12. Slave 2 R Freedom 4:00
13. We Ain't Going Nowhere Interlude 0:32
14. We R So Strong 4:18
15. Beautiful Sadie 4:35
16. Prologue 0:46
Лог создания рипа
Содержание индексной карты (.CUE)
DR Log
Vol Two
01. Intro 0:11
02. Get Next To You 3:52
03. Ali Vs Frazier 3:36
04. Redemption For The Soul, Enlightenment For The Earhole 8:50
05. Please Let Me Go 4:08
06. Meditation 01: Astrology 3:52
07. You Have A Friend 3:41
08. Reflections 6:38
09. Meditation 02: Self-Love 3:46
10. Letters From A Soldier (Reprise) 4:36
11. In The Key Of Nudity 3:55
12. V.P. Credits 3:00
13. Peace Be With You (Reprise) 3:50
Лог создания рипа
Содержание индексной карты (.CUE)
DR Log
Об исполнителе (группе)
Jesse Johnson—Guitarist/Composer/Producer—Has an impressive set of credentials. With accomplishments including four solo LPs (A&M Records), four LPs with The Time (Warner Brother’s Records), numerous Gold & Platinum LPs, numerous performances and recordings with and for top artists around the world, Jesse has established himself as a bona fide talent.
Jesse was born in Rock Island, Illinois, but cut his musical teeth in East St. Louis, Ill & St. Louis, Mo. He started playing guitar and taught himself to play by listening to recordings of Lightning’ Hopkins, Funkadelic, Albert King, B.B. King, Curtis Mayfield, Muddy Waters, Jimi Hendrix, Led Zeppelin, Robert Johnson, just to name a few of his favorites.
Helping to create "The Time", a national act provided the guitarist unimaginable opportunities such as: Signing to WB Records, a successful charting record, selling Gold status, worldwide notoriety, performing to large audiences worldwide, and most importantly learning how to craft and record songs. The show of proof in his early song writing development, can be heard in compositions he co-wrote with Prince such as: The Time’s” “Jungle Love”, “The Bird” “Ice Cream Castles” and “If The Kid”. (Jesse first published work was “Bite The Beat” by Vanity 6)
Jesse soon left The Time after finishing “Purple Rain” the movie and The Time’s “Ice Cream Castles” LP to pursue a solo career. He dove into producing and writing his first solo LP for A&M records, “Jesse Johnson’s Revue”. His solo efforts proved to be another successful move. His first solo project produced three top ten singles, “Be Your Man”, “Can You Help Me” and “I Want My Girl”. Jesse Johnson’s Revue soon became an added addition to the Gold & Platinum awards that decorated the walls of the studio.
His accomplishments did not go un-noticed. After the success of his first album, Jesse makes worthy strides in movie scoring and soundtracks by contributing to notable films such as, “The Breakfast Club”, “Pretty In Pink”, “Another 48 Hours”, “A Time to Kill”, “White Men Can’t Jump” “Action Jackson”, “Graffiti Bridge”, “The 5 Heartbeats” and even independent films such as “Steam” (2009), to name a few.
Jesse returned to the studio to write, produce and perform another solo album but with a different sound. “Bare My Naked Soul” is Jesse’s stripped down approach to music. He digs deep, and once again produces an album that explores the depth of his soul. The album is flavored with guitar, and is uniquely different from anything he had previously released.
With Jesse’s undying drive to express himself through his music he’s back from the studio to deliver his latest release, “Verbal Penetration”. This album, once again exposes Jesse’s soul to the world by creating a truly timeless piece addressing issues that affect society today. This album is sometimes reminiscent of his past work. But with a refreshing twist that is sure to please many a fan that fell in love with Jesse’s style of music, guitar playing, and songwriting. “Verbal Penetration” will capture audiences ready for something new as well as thought provoking.
Jesse’s continued fan support by admires of his work worldwide, comes as no surprise to anyone who understands the longevity of music that moves you, or in the case of Jesse Johnson, “Music That Makes You Move!!!
Об альбоме (сборнике)
Outside cover shows Volume One and Volume Two on the different sides, the discs however are both label Verbal Penetration Volume One and are tagged with I and II.