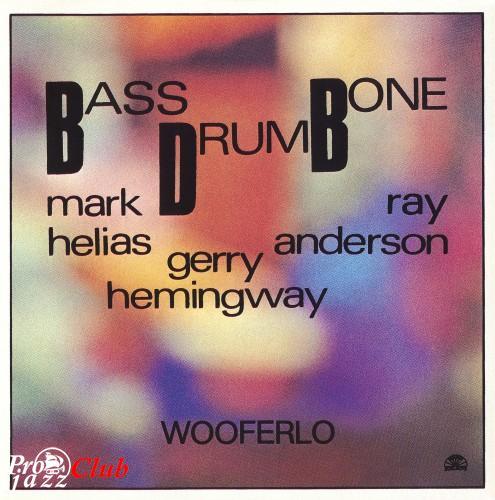 Треклист:
BassDrumBone / Wooferlo
Жанр: Free Jazz, Modern Creative, Contemporary Jazz
Носитель: CD
Страна-производитель диска: Italy
Год издания: 1989
Издатель (лейбл): Soul Note
Номер по каталогу: 121 187-2
Страна: USA
Аудиокодек: FLAC (*.flac)
Тип рипа: tracks+.cue
Битрейт аудио: lossless
Продолжительность: 46:54
Источник (релизер): gssmg7
Наличие сканов в содержимом раздачи: да
Треклист:
1. Wooferlo (3:57 )
2. I Don't Know (5:04)
3. Beau Regard (6:19 )
4. Sambali (6:24 )
5. Alligatory Crocodile (4:56 )
6. Space (9:16)
7. Arocka (4:59 )
8. Struttin With Some Mutton (5:59)
Лог создания рипа
Содержание индексной карты (.CUE)
Доп. информация
Recorded November 2 and 3, 1987 at Barigozzi Studio, Milano
Об исполнителе (группе)
BassDrumBone is a trio with an unusual instrumentation and a unique sound. A true collective, their music combines three distinct compositional and improvisational approaches and an exceptional musical rapport. Mark Helias, Gerry Hemingway and Ray Anderson began performing as a trio in the fall of 1977. Their first record, "Oahspe", was released in 1979 on the Auricle Record label. Bob Rusch in his review of the record, wrote: "Exceptionally good music, fearlessly played and tightly coordinated. Recommended." In 1984 "Right Down your Alley" was released on Soul Note Records of Italy and in the beginning of 1986 "You Be" was released on the Minor Music label of Germany. Both records received acclaim from the European and American press including a five star review in Downbeat magazine for "You Be". In 1988 "Wooferlo" was released on the Soul Note label. Ben Watson of Wire Magazine commented: "Each musician has a story to tell, the solos are stuffed with event and happenstance". After 1988 the group went into dormancy while all three of its members pursued their own individual groups. In the fall of 1993 BassDrumBone regrouped for a tour in Europe and never sounded better. A tour in 1996 yielded "Hence the Reason"(enj9222) and in March of 1999 BDB released some archival material from 1986-97 on an Auricle Records cd entitled "Cooked to Perfection". BassDrumBone celebrated its 25th year together with the release of "March of Dimes" on the Dutch label Data. On the eve of our 30th anniversary, Clean Feed released "The Line Up".
Об альбоме (сборнике)
Bass-Drum-Bone is a three-way musical democracy featuring trombonist Ray Anderson, bassist Mark Helias and drummer Gerry Hemingway. Helias' intricate patterns and Hemingway's variety of sounds (a little reminiscent of Barry Altschul) keep the rhythms consistently inventive and inspire Anderson. The music ranges from the uptempo "I Don't Know" and the eccentric calypso "Sambali" to the catchy "Alligatory Crocodile." Only "Space," which at nine minutes wanders on a bit too long, is a minus. In general the musical partnership between these three talented improvisers is mutually rewarding and their accessible brand of avant-garde jazz is quite colorful. ~ scott yanow, allmusic.com
Recorded at the Bergozzi studio on BassDrumBone's 1987 European tour, this fourth recording of the trio, was to be followed by a six year hiatus of the band. The title track, "Wooferlo" has it's first incarnation here, with a later version showing up for the quintet on the cd "Special Detail". Also receiving it's first performance here is my piece "Space" which shows up again in a more orchestrated version on the cd "Down to the Wire" by the quartet. Mark Helias has many works featured here including his first recording of the work "Beau Regard" and also "Sambali" which shows up on the more recent "Hence the Reason" cd on Enja. But my favorite on this cd is of his much older work called "Arocka" which sports a quite demented interplay. Ray has his first version of "Alligatory Crocodile" which was to be later converted into the moniker for his current funk band. ~ gerryhemingway.com
Состав
Ray Anderson - trombone
Mark Helias - bass
Gerry Hemingway - drums
Any questions -> support@pro-jazz.com. По всем вопросам пишите -> support@pro-jazz.com
—
234
M0p94ok
Нет комментариев. Ваш будет первым!
Войдите или зарегистрируйтесь чтобы добавлять комментарии