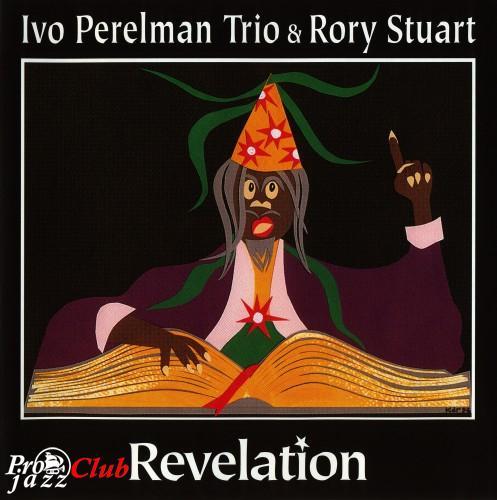 Треклист:
Ivo Perelman Trio & Rory Stuart / Revelation
Жанр: Free Jazz
Страна-производитель диска: USA
Год издания: 1996
Издатель (лейбл): CIMP
Номер по каталогу: CIMP #134
Аудиокодек: FLAC (*.flac)
Тип рипа: tracks+.cue
Битрейт аудио: lossless
Продолжительность: 1:09:08
Источник (релизер): CD
Наличие сканов в содержимом раздачи: да
Треклист:
01. Waiting for Plugs (10:00)
02. Drips (7:36)
03. October Rains (6:22)
04. Auld Lang Syne (7:01)
05. Auld Lang Syne Blues (5:48)
06. Pellican Rose (4:42)
07. Summer Ballad (6:37)
08. Bobaba Dubaa (5:23)
09. In A Sentimental Mood (12:39)
10. Ivocation (3:35)
Лог создания рипа
Содержание индексной карты (.CUE)
Доп. информация
Recorded at The Spirit Room, Rossie, NY, October 10, 1996
Об альбоме (сборнике)
The idea for this session, which is in essence an old fashioned jam session, had it genesis with Dominic&Jay. After finishing up the second day of recording for Ivo's Slaves of Job (CIMP 126) session, Dominic and Jay wanted to try recording in a not purely acoustic setting. So after about four hours of rest the trio again met in the Spirit Room. Also present was guitarist Rory Stuart, who had been in the area visiting, and who had been an observer during most of the previous day's recording. I had produced Rory's first recording, Nightwork, for Cadence Jazz Records in 1983. On the basis of that and his fine records for Sunnyside Records, and with the exception of some more avant work with trombonist Michael Vlatkovich, I basically thought of Rory as a musician in the progressive Bop genre. I was pretty skeptical of this combination; I just didn't hear it. However, I also knew that all four musicians had expansive musical and mental capabilities and I have more than once enjoyed the revelations and rewards of the artistic surprise. And surprised I was, pleasantly so. Rory's sound fit in perfectly and had a spreading effect on the music, allowing a focus for greater definition and vision on the other instruments. This session is not typical for CIMP in that it was not envisioned and formulated in advance. It happened out of the circumstances of the moment. When it took place, no one had any commitment to or expectation of releasing the material. It was an exploratory occasion. The fact is, Rory had never before played with this trio or any of the individuals. However, no matter how much planning is done, art is, at its essence at birth, of the moment. It works or itdoesn't. For myself and those involved this worked, and worked well. To preserve this birth and its evolution in its original state, I have kept the music in the order it was recorded. And so, while there are the individual performances to enjoy, there is also the added dimension of the whole and its development. The inclusion of two pieces using the Auld Lang Syne motif came about when, after the first take (track 4) was recorded, I asked the group if they could do it again and this time expand the blues riff that Rory briefly alluded to the first time. The second take (track 5) had such a different ambience I've kept both for my enjoyment and, I hope, yours. Is this just the first document of this grouping? Will there be more? I don't know. What I do know is that this occasion has had an effect on each musician and will in various ways from time to time affect their future work and perspectives. For me it was a revelation. ~ robert d. rusch, cimprecords.com
Led by tenor saxophonist Ivo Perelman, this group features bassist Dominic Duval and drummer Jay Rosen - who comprise his core trio and includes guest guitarist Rory Stuart. Throughout, the format is loose, allowing the music to spontaneously unfold; however, the multi-dimensional results are a cut above the the unbridled chaos usually associated with free jam sessions. "Waiting For Plugs" begins pensively, with Stuart coaxing disjointed sounds from his instrument as the rhythm section reacts in the background; later on, Perelman periodically imitates the guitar, and then painfully screeches alone, initiating another group episode. In contrast, "Drips" follows an arched design with the guitar playing pointillistically and the trio following suit until reaching a peak that tapers into nothingness. Two of the more amusing tracks are based on "Auld Lang Syne;" the first develops over an eerie drone, while the second mines a bluesy vein. The remaining pieces reflect an equally refined balance of freedom and control. In short, Revelation features creative music that places close listening and group interaction above more mundane considerations like what scale to play over a particular chord. ~ jim ferguson, jazztimes.com, november 1997
Recorded only about four hours after Ivo Perelman had finished his Slaves of Job session for CIMP, Revelation wasn't the first time he had played with bassist Dominic Duval and drummer Jay Rosen. However, it did mark the first time those three players formed a quartet with guitarist Rory Stuart. Revelation is essentially an informal jam session; the players simply got together and started blowing without having done any real preparation. But the quartet proved to cohesive and enthusiastic on material by Perelman, Duval and Stuart (most of which favors space over density) as well as unorthodox interpretations of "Auld Lang Syne" and Duke Ellington's "In a Sentimental Mood" (which is closer to jazz's mainstream than Perelman usually gets). Although not among Perelman's essential releases, Revelation is an interesting CD that the saxophonist's more devoted followers will find of interest. ~ alex henderson, allmusic.com
Состав
Ivo Perelman - tenor saxophone
Rory Stuart - guitar
Dominic Duval - bass
Jay Rosen - drums, percussion
Any questions -> support@pro-jazz.com. По всем вопросам пишите -> support@pro-jazz.com
—
187
M0p94ok
Нет комментариев. Ваш будет первым!
Войдите или зарегистрируйтесь чтобы добавлять комментарии