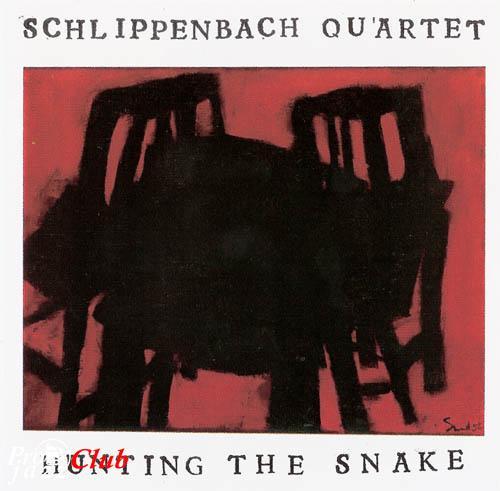 Треклист:
Schlippenbach Quartet (Peter Kowald, Paul Lovens, Evan Parker) - Hunting The Snake
Жанр: Free Jazz, Free Improvisation
Страна-производитель диска: USA
Год записи: 1975
Год издания: 2000
Издатель (лейбл): Atavistic
Номер по каталогу: UMS/ALP213CD
Страна: Germany/USA
Аудиокодек: FLAC (*.flac)
Тип рипа: tracks+.cue
Битрейт аудио: lossless
Продолжительность: 1:17:15
Источник (релизер): собственный рип
Наличие сканов в содержимом раздачи: да
1 Glen Feshie
2 Moonbeef
3 Hunting The Snake
4 Wenn Wir Kehlkopfspieler Uns Unterhalten
Recorded September 10, 1975, Sendesaal Radio Bremen, Bremen, Germany.
Лог создания рипа
Содержание индексной карты (.CUE)
Об альбоме
***
The material on Hunting the Snake -- four lengthy improvisations, each in the 20-minute range -- comes from a live 1975 radio performance but was not released until 2000. It features all three members of the long-running Schlippenbach Trio (pianist Alexander von Schlippenbach, saxophonist Evan Parker, and percussionist Paul Lovens) along with Peter Kowald on bass. The music here is dense, kinetic, atonal, and often harsh, but while not easy listening, this album is not entirely remote or inaccessible, either. The group's playing is very physical and energetic, and though it is recognizably distinct from most American free jazz, the jazz roots are, at this point, still readily discernible. The real interest comes in listening to the quartet's interplay, which is less refined than on some of the Schlippenbach Trio's later work, but which has a certain ragged cohesiveness and charm of its own. Parker's scraping saxophone, Lovens' junk-pile percussion, Kowald's feverish bowing, and Schlippenbach's atonal piano clusters contribute equally to the music's flow -- there isn't a real separation of "lead" vs. "rhythm" instruments during most of the album. Occasionally, however, Parker steps out on his own and lets loose with an extended high-pitched squall, as he does on the standout title track; these abrasive solo moments are especially interesting (or hard to listen to, depending on your take). Its near-80-minute running time is exhausting, but Hunting the Snake is worth tackling in more manageable doses, as it continues to sound daring and alive more than 25 years after its creation.
by William York
***
The '70s were a banner decade for free improvisation in Europe. Much of the free jazz of today—especially recent material from the New York avant/free scene—owes huge debts to early European improvisers. Pianist Alexander von Schlippenbach made great leaps at both the compositional level and the performance level, integrating a high level of structure into a setting fully embodying musical democracy. Schlippenbach's playing per se spans the range from focused harmonic concentration to all-out glissando/clustering abandon. While the obvious comparisons to players like Cecil Taylor and Matthew Shipp may help to clarify Schlippenbach's structuralist musical vision, his approach can also be readily compared to Monk and classical composers as well.
In the company of masters like saxophonist Evan Parker, bassist Peter Kowald, and drummer Paul Lovens, Schlippenbach's music rises to a higher level. Parker constantly teeters on the brink of overblown textures and whistling overtones, building and releasing tension in coordination with the rest of the group. The unique combination of Kowald and Parker together creates a web of sound which frequently steps outside the bounds of conventional notation and enters into a range of timbre that approximates the human voice. Lovens's percussion also defies any sort of regular pattern, jumping from rhythm to rhythm with creative abandon.
Hunting the Snake, a never-before released record from a 1975 Radio Bremen session, is the only CD recording in print of the Schlippenbach quartet. For those listeners who have absorbed and appreciated the underdocumented genius of Schlippenbach in settings like his fantastic 1990 FMP trio recording Elf Bagatellen (with Parker and Lovens), this disc is a must-listen. For those curious about the free jazz innovations of the '70s, Hunting the Snake is a fine starting point. Regardless, it's great music, delivered from the heart with sensitivity and unbridled creative freedom.
By NILS JACOBSON
***
Alexander von Schlippenbach has been playing with his trio for many years now, which also contains the legendary Evan Parker on soprano and tenor sax and percussionist Paul Lovens. The rarely recorded quartet adds Peter Kowald on bass, and while they have released two LPs, Hunting the Snake is the first Schlippenbach Quartet release available on CD.
Recorded in 1975 for a German radio station, Hunting the Snake contains four long pieces that showcase the speedy improvisations of the group. It's a dense sound, with lots of action and jumping about (especially with Lovens) but at times it spreads out and the group gets into a quieter (though never mellow) connection.
Schlippenbach's piano is circular and disorienting. He plays many notes quickly but his touch is light. Even when he gets loud he remains delicate, especially when dancing around both ends of the keyboard at once. At times it sounds like Schlippenbach is directly plucking the piano strings, sounding like raindrops on glass. His communication with Lovens is remarkable.
"Moonbeef" opens with some sort of circular breathing from Parker; it sounds like two saxophones are playing at once, with a low bleating and some shrill squeaks on top of it. He builds up, using frantic flutters of notes, with Kowald alternately tapping and bowing his instrument. Either one of them can play remarkably on their own--the interplay of Parker's alien sax over Kowald's deep moans is quite unique.
Hunting the Snake is somewhat lengthy, stuffing the CD with the pieces. Sclippenbach never pulls the group anywhere that they can't handle--when working with such skilled musicians, there's a lot more room to explore. While each individual moment of the album is bright and lively, nothing is ever gratuitous.
The Unheard Music Series continues to present challenging, important music that sounds great and is nicely packaged. I've hardly bought anything that wasn't part of this series recently. Let's hope that they continue with other fine releases.
by John Fail
Состав
Alexander Von Schlippenbach - piano
Evan Parker - saxophones
Peter Kowald - bass
Paul Lovens - percussion
Any questions -> support@pro-jazz.com. По всем вопросам пишите -> support@pro-jazz.com
—
161
M0p94ok
Нет комментариев. Ваш будет первым!
Войдите или зарегистрируйтесь чтобы добавлять комментарии