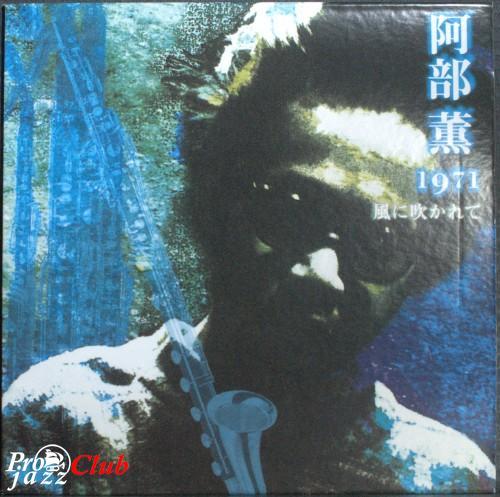 Треклист:
Kaoru Abe (阿部薫) - Blowin' in the Wind (風に吹かれて) 1971
Жанр: Free Jazz, Free Improvisation
Носитель: CD
Страна-производитель диска: Japan
Год издания: 2003
Издатель (лейбл): Polystar Jazz Library
Аудиокодек: FLAC (*.flac)
Тип рипа: tracks+.cue
Битрейт аудио: lossless
Продолжительность: MTCJ-5513
Источник (релизер): рип мой. диск тоже.
Наличие сканов в содержимом раздачи: да, фото
Треклист:
01. Alto Saxophone Solo Improvisation 1 (1:01)
02. Alto Saxophone Solo Improvisation 2 (10:58)
03. Acacia no Ame ga Yamutoki (Bass Clarinet Solo) (18:34)
04. Blowin' in the Wind / Hanayome Ningyo (Bass Clarinet Solo) (18:41)
Лог создания рипа
Содержание индексной карты (.CUE)
Об альбоме (сборнике)
KAORU ABE Kaze Ni Fukarete CD [Tokuma] As historically illuminating as its two companion Tokuma titles, if a more problematic listen, Kaze Ni Fukarete (Blowing In The Wind) contains what one presumes is much of the remainder of the December 4 show at Akita University, one track from which ('After The Acacia Rain') of course appears on Kurai Nichiyobi. It starts with two solo alto improvs, one a cheeky run lasting less than a minute, the second a bit longer. Its eight or so minutes offer a teasingly brief glimpse at another side to Abe - he hints throughout in a tantalisingly sketchy way at a real stylistic departure, with well-paced periods of note enunciation, sprite tones and skilfully fleet streams. These brief interludes are gone just as suddenly as they are introduced, as Abe reverts to a more brute alto format in perverse fashion, improvising roughly on his archetypal theme before impatiently and abruptly concluding, leaving both ends of the track open, a recording as frustrating as it is revealing. More helpful is its successor, yet another version of 'After The Acacia Rain', this time played on bass clarinet. The three markedly different takes on the ballad presented by the Tokuma albums clearly demonstrate Abe's erratic relationship with the ballad, which seemed to change on a daily basis. This version serves as an amazing summation of his mixed feelings for this standard (and what it represented), a standard which, at this stage of his career, can plausibly be seen as his 'My Favourite Things'. Played literally within hours/minutes of the blatantly contrasting version on Kurai Nichiyobi, it here becomes an elongated catalogue of moods, beginning with the respectfully sombre, proceeding to gradual impatience and urgency, onto outright dislike and mockery, and all the way back again. It's remarkable for its yawning inter-note chasms - whereas Abe's typical alto style was to fill every available space as quickly as possible (and his bass clarinet style to fill space slowly), here he permits individual notes and sequential runs to soak up air and hang around in the balance before eventually following them up. In the ever-widening blank spaces of the more gaping sound-holes towards the end of the near 40-minute running time, it really sounds as though the piece will actually never end, and by its conclusion, Abe has stretched the sounds further apart than any other recording from this stage of his career, and has also presaged the playing style that he would later in his lfe come to adopt. Revelling as ever in the bass clarinet's natural full-bodied melodic potential, Abe intersperses passages of ruptural dissonance with increasing frequency and abrupt juxtaposition, all the while maintaining what come to be the piece's characteristic pauses, establishing a tug-of-war/discourse between the two forces which, 25 years on, plays like an analysis of his creative and technical methods. An astonishing recording, which places all Abe's other playing on the instrument in another light. It's followed by a medley of Robert Dylan's 'Blowing In The Wind' and the Japanese standard 'Hanayome Ningyo' ('Bride Doll') of annoyingly murky recording quality and short duration which nonetheless elaborates, however briefly, on its predecessor's suggestions, emphasising that the Tokuma titles ask as many questions as they answer. Attempting to reinstate lost history, by showing Abe to be a player of diversely broad style, method and technique by only just scratching the surface, they implicitly acknowledge that there exists much more that deserves to be unearthed just as much but which probably never will, writing large an emboldened ellipsis which, for those who choose to hear, reverberates with deafening loudness. -Nick (http://mysite.verizon.net/spin17/kaoru.html)
Состав
Music by Kaoru Abe (1, 2), Hideyuki Fujiwara (3), Bob Dylan ("Blowin' in the Wind"), and Haseo Sugiyama ("Hanayome Ningyo")
Kaoru Abe: alto saxophone (1, 2), bass clarinet (3, 4)
Доп. информация:
Recorded live at Akita University, Akita, December 4, 1971
Released in December 2003
Originally released in 1997 on WAX Records / Tokuma Japan Communications
Any questions -> support@pro-jazz.com. По всем вопросам пишите -> support@pro-jazz.com
—
178
M0p94ok
Нет комментариев. Ваш будет первым!
Войдите или зарегистрируйтесь чтобы добавлять комментарии